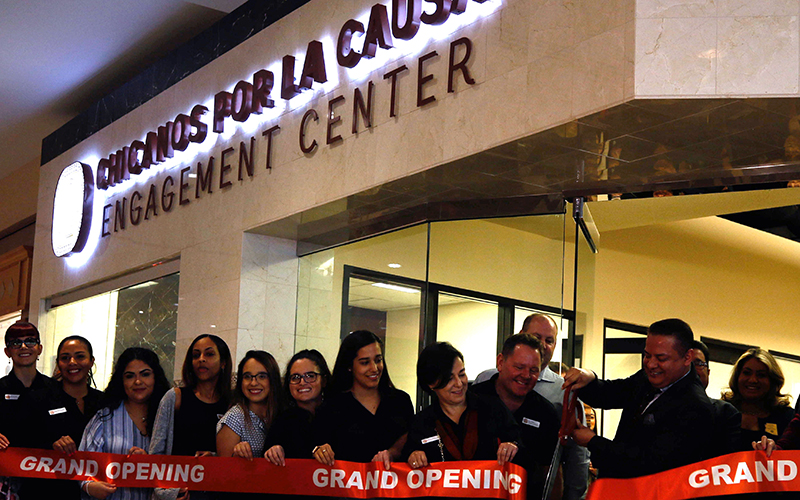 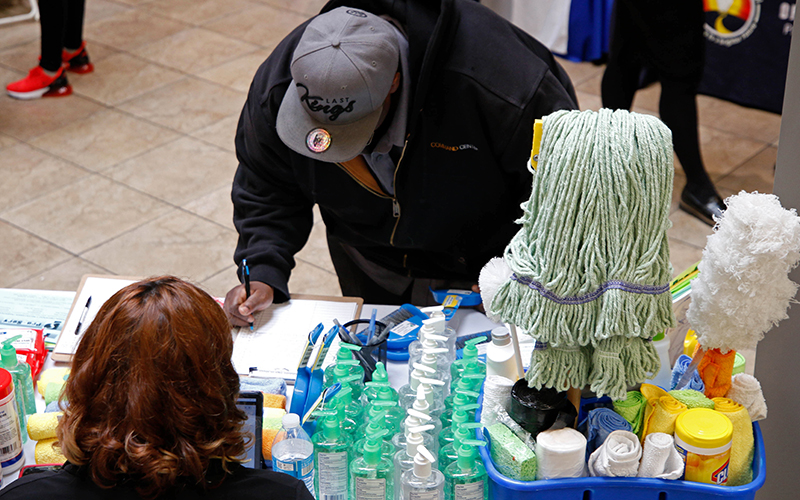 PHOENIX – Among the hundreds of attendees at the jobs fair at Desert Sky Mall, Terry Hardy stood taller than most and carried a bag full of handouts from employers. Hardy has lived in the Phoenix village of Maryvale for the past 30 years and attended the fair seeking to get back into the workforce after being unemployed for the last four years.

“I’ve had eight back surgeries within the last four years. So it’s been a real struggle with that,” Hardy said. Now that his health has improved, he’s seeking employment because his finances have become tighter.

Thankfully for Hardy, the jobs fair was a success.

“It’s been very beneficial. I have three interviews already set up for the end of this week,” Hardy said.

Hardy found out about last Tuesday’s fair even though he’d never heard of the Phoenix nonprofit that hosted it: Chicanos Por La Causa, which serves Latino communities across the Southwest through education, housing, health and human services, and economic development programs.

Chicanos Por La Causa hosted the jobs fair to celebrate the grand opening of its Engagement Center, which will be the focal point of the organization’s effort to empower the residents of Maryvale and west Phoenix through education, job skills training and youth engagement programs.

“What we’re really looking to do is just bring all the programs and services into one location that is accessible to people, a location inside a mall where people want to be,” said Victor Contreras, director of Workforce Solutions at CPLC, the nonprofit’s employment training and education branch.

Chicanos Por La Causa built the 8,200-square-foot center inside Desert Sky Mall, near the southwest entrance, so it can be easily found and visible to everyone in the community. It will be open 7 days a week, has two offices and four classrooms where the organization will host job training and placement sessions, high-school degree equivalency classes and other workforce programs. Chicanos Por La Casa also runs a health center in Maryvale.

Maria Harper-Marinick, the chancellor of the Maricopa County Community College District, welcomed the partnership made between the district and Chicanos Por La Causa, highlighting their efforts to bring more education and employment opportunities to Maryvale through this new center.

“We are here to offer access to information and opportunities for anyone in the community, young and the not so young, who has a need for betterment in life, access to a job or better jobs,” Harper-Marinick said.
She added that MCCCD counselors will be available at the center on the weekends to help students enroll in school and review their education options.

“One of the things that’s shocking about Maryvale is that there is no community college in Maryvale. You have to travel about eight miles to visit a school,” Contreras said. 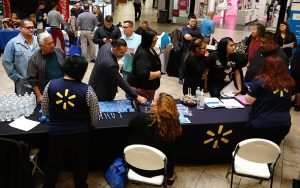 Chicanos Por La Causa thought it would serve mostly young people in the new space at Desert Sky Mall but soon realized people of all ages needed help. “There are a lot of individuals who are being left out of the workforce who just need the additional assistance or training,” said Victor Contreras, director of workforce solutions for CPLA. (Photo by Meg Potter/Cronkite News)

Although graduation rates for community colleges is one way to measure success, a 2011 Department of Education report noted that the rates often fail to account for successful transfers by students to four-year institutions without earning a community college degree.

The success rate is low, Contreras said, “because we just haven’t done a very good job of serving the community. But that’s changing.”

Through partnerships with the Arizona Office of Economic Opportunity, Goodwill and Walmart, Contreras said, investments are being made in the Maryvale for workforce development, including a $1.5 million grant from Walmart.

“About a year and a half ago, Walmart realized they needed to do something more to support not only their local employees, but the employee pool that they are working with, particularly here in Maryvale and the Phoenix area,” Contreras said.

Javier Angulo, Walmart’s senior director of community relations, said it’s crucial for Walmart to engage with communities where stores are located. There are two Walmart Supercenters in Maryvale.

“Here in Phoenix, we have a large footprint and it’s important for us to be competitive in the retail sector,” he said.

A changing retail sector means new skills required are required of workers, Angulo said, so Walmart “partnered with organizations like Chicanos Por La Causa to establish programs that would give new training opportunities to people to be more productive and more effective in the retail workforce.”

Over the past two years, Contreras said, CPLC has helped more than 7,300 Maryvale residents find employment through its programs.

“We’re now looking to impact 10,000 families and individuals per year from this location,” Contreras said of the center at Desert Sky.

LaTina Watkins, a student success coach for Rio Salado Community College, attended the jobs fair in search of potential employment leads for her students and refers a lot of them to CPLC for their employment and education resources.

“Rio Salado and Chicanos Por La Causa is giving opportunity to low-income families, or minorities, or even just people who don’t know exactly what they want to do with their lives or how to go about doing things in their lives,” Watkins said.

She recently referred a student to CPLC to get financial assistance to pay for her GED exam.

“She passed all of her exams,” Watkins said. “She is now a new graduate for our 2019 graduation. And then she also applied for multiple positions where now she has options of which employment to go to. So I’m very proud of that.

“That’s why I’m here today. To get more students on a successful path to where they need to go.”