The FDA announced a new drug to combat postpartum depression, a serious mental condition that affects nearly one in seven new moms. (Photo by Jessica Pankratz via Flickr/Creative Commons)

PHOENIX — The U.S. Food and Drug Administration has approved the first treatment designed to tackle postpartum depression, a potentially life-threatening condition that affects nearly 1 in 7 new mothers in America.

However, the 60-hour intravenous drip will cost $20,000 to $35,000 and require a stay in a medical facility, and it’s unclear whether insurance will cover the cost, according to CNN.

Several Arizona advocates hailed the news, saying it will bring attention to a condition that impacts many new mothers, but a midwife said she was concerned about the side effects of the drug brexanolone, which Sage Therapeutics will market under the name Zulresso.

“These women feel the weight of a building on their shoulders and can’t get out,” said DeAnn Davies, director of the Arizona chapter of Postpartum Support International. “They are in a funk, detached and not enjoying having their babies.”

Postpartum depression also can be deadly.

“Postpartum depression is a serious condition that, when severe, can be life-threatening,” Dr. Tiffany Farchione of the FDA’s Center for Drug Evaluation and Research said in a statement. “Women may experience thoughts about harming themselves or harming their child. Postpartum depression can also interfere with the maternal-infant bond.”

Zulresso will be available by late June, according to Sage Therapeutics.

Most women will have the “baby blues” that last up to two weeks after birth, the Mayo Clinic says, but some mothers experience a serious, long-term ailment. Sufferers may experience mood swings, withdrawal, thoughts of harming themselves or their baby and severe anxiety.

Previously, mothers with postpartum depression were given general antidepressants, which require much longer to take effect, according to clinical trials reported in The Lancet in 2016 and 2017. In clinical trials of Zulresso, women had results as early as 24 hours, Sage said in a news release.

Danielle Haines is a midwife whose photo with her newborn, alongside a post about her after-birth struggles, went viral in 2015. She said she didn’t have postpartum depression but was “emotional at the moment.” 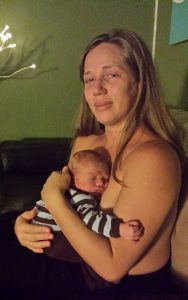 Danielle Haines, a midwife whose photo with her newborn in a tough moment went viral in 2015, says she has concerns about the approved drug, brexanolone. (Photo courtesy of Danielle Haines)

“My first go-to is not medication in most situations,” Haines said of Zulresso. “I would like to know truly what the risks are. How is it working? Does it get into the breast milk? Does it change women lactating properly?”

In clinical trials, the FDA said, the most common adverse reactions to Zulresso were sleepiness, dry mouth, fainting and flushing.

Haines said better alternatives are building a stronger sense of community around new mothers, such as having support groups and making sure new mothers aren’t isolated.

“Depression can manifest in many different ways,” said Sharla Best, chief executive director of Women’s Health Innovations of Arizona. “There are so many moms who don’t know what they’re experiencing.” 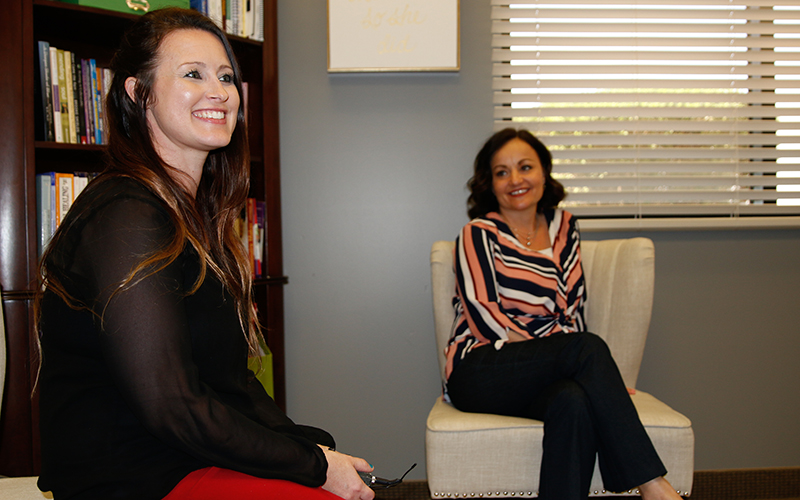 Sharla Best (left) and Michelle Lacy specialize in helping mothers with mental health during and after pregnancy at Women’s Health Innovation of Arizona. (Photo by Tyler Peckham/Cronkite News)

Best and Michelle Lacy created the nonprofit in Gilbert, which also works to combat the stigma surrounding the condition. Society expects new mothers to be happy about their newborn rather than burdened by the pressures of parenthood.

“Moms have a hard time talking about this,” Best said.

The nonprofit urges families to “choose the best options possible,” which often includes a multifaceted program that integrates family support, medication and counseling.

Davis said one effect of the drug’s approval might be that it focuses national attention on postpartum mothers.

“We really need to change the stigma of postpartum depression, what women suffer, and normalize them,” she said.