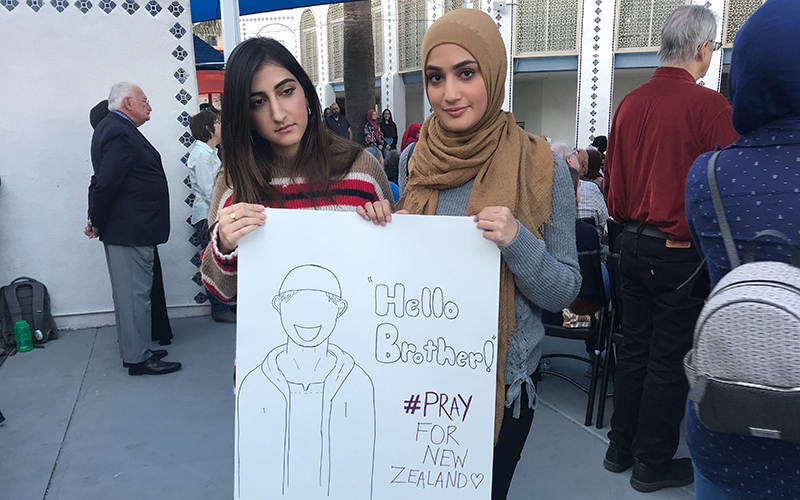 Friends Mahleej Zara (left) and Mira Aiche said they were grateful for the support and love shown by the people who came to a vigil at the Tempe mosque on behalf of the New Zealand victims. (Photo by Ashley Carter/Cronkite News)

Hundreds attended a candlelight vigil in Tempe for the victims of the shootings at two mosques in New Zealand last week that left 50 people dead and dozens injured. (Photo by Hailey Mensik/Cronkite News) 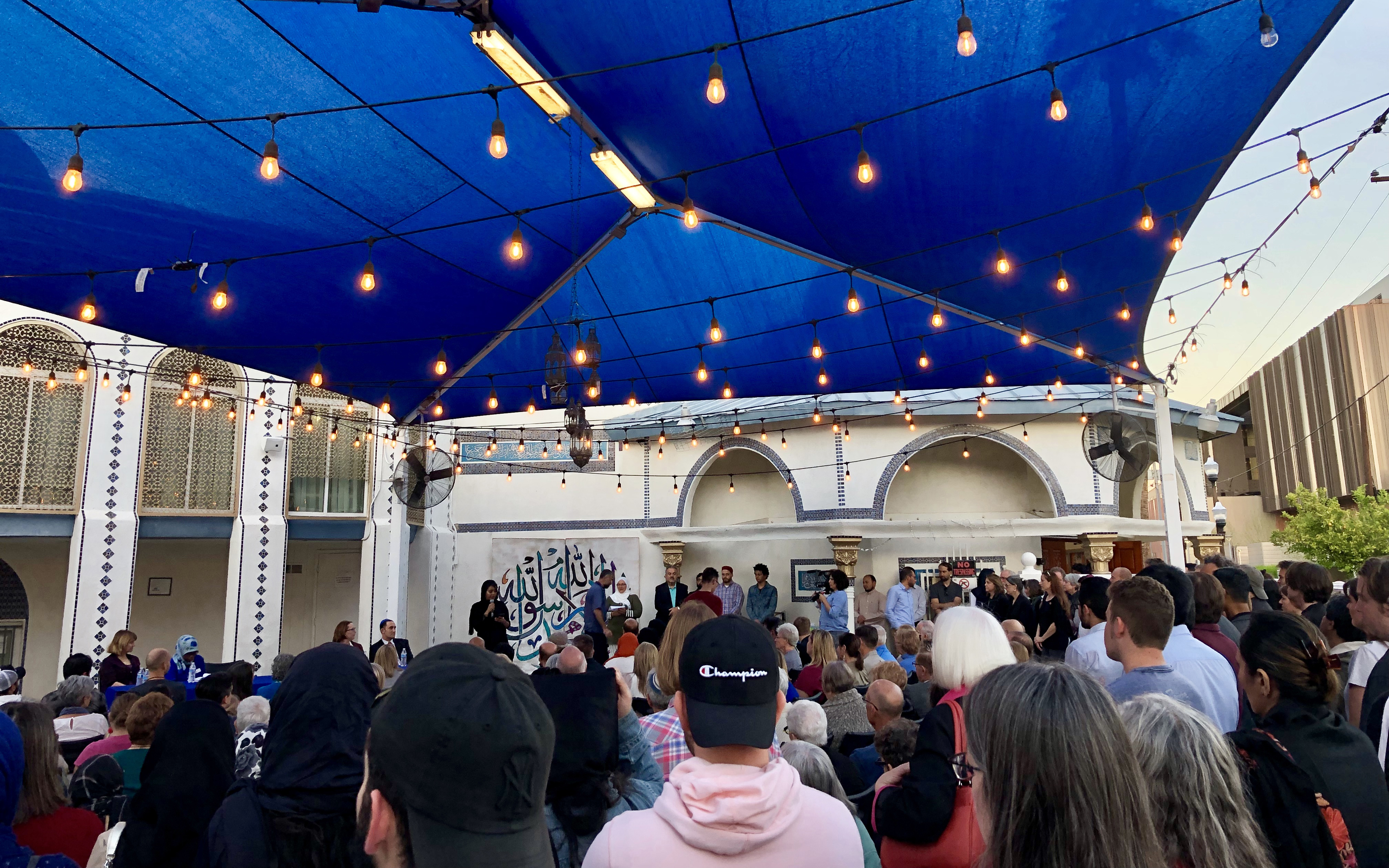 “It just makes me feel so happy that people are here to support us, and we’ll be there to support you in your time of need,” said Mira Aiche, who worships at the Islamic Community Center of Tempe. (Photo by Hailey Mensik/Cronkite News)

TEMPE – United, they mourned, coming together in Arizona in a vigil to show that love triumphs over hate.

Hours after 50 people were gunned down and dozens were injured in a terrorist attack at mosques in Christchurch, New Zealand, last week, Arizonans spoke of overcoming hate at a candlelight vigil at the Islamic Community Center of Tempe on Saturday.

Their voices joined thousands of others in the state and around the world.

“It’s so much love,” said Mahleej Zara, 21, adding that the outpouring reminded her of a vigil she attended nearly a year ago when the Tempe mosque was vandalized.

Her friend, Mira Aiche, looked around at the hundreds of people who assembled Saturday.

“I was telling her I got goosebumps just by looking at people from all faiths and different ages, colors, everything,” said Aiche, 22. “It just makes me feel so happy that people are here to support us, and we’ll be there to support you in your time of need.”

Those who spoke condemned Islamophobia, white supremacy and hate-filled rhetoric that they said fueled the Christchurch attacks.

A year ago, two women Facebook livestreamed themselves at the mosque mocking Muslims and encouraging three children to steal flyers they called propaganda. The women were charged with burglary and criminal damage.

Tempe City Council member Lauren Kuby praised the mosque for its response to that incident.

The suspect in the New Zealand attacks, a 28-year-old Australian, also livestreamed the attack, according to media reports.

Shqeirat, who called for unity, decried an Australian senator’s statement blaming immigration on the attack.

On Saturday, police arrested a man accused of threatening and intimidating members of the United Islamic Center of Arizona in north Phoenix. Police said Noel Becht went to the center, saying he was curious about Islam and asking to sit in on a prayer service. But he later entered rooms without permission and asked unusual questions about the times of services.

When questioned by a mosque leader, he allegedly put a finger to his neck and made a sawing motion. Becht was booked into a Maricopa County jail.

Zara and her friend, Mira Aiche, weren’t aware of the Phoenix incident at Saturday’s vigil.

But they said they weren’t afraid to come to the mosque where they’ve prayed for years. Instead, they felt more compelled after the shootings in New Zealand. They said they noticed more people on Friday than usual.

“I went to both services,” Zara said. “I wanted to be there at the mosque, showing that we’re not afraid and this isn’t going to change anything.”

New Zealand Prime Minister Jacinda Ardern has vowed to change the country’s gun laws and said a Cabinet meeting was scheduled Monday to discuss reform. The gunman who opened fire at two New Zealand mosques was charged with murder Saturday.

CORRECTION: A previous version of this story included misinformation. Mahleej Zara is 21. The story has been corrected, but clients who used earlier versions are asked to run the correction that can be found here.