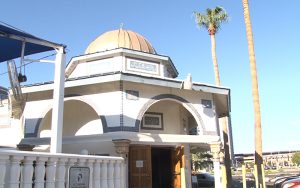 The premise was simple: anyone and everyone was invited to eat some pizza, watch a 30-minute movie on Islam and tour the mosque. People filed in, grabbing slices of warm pizza and finding a seat. Non-Muslims sat next to Muslims. Six Tempe Police Department officers watched from the back of the room.

Mosque members said this is exactly why events like the Mosque Open House are necessary. Stereotypes and misinformation about the Muslim faith abound in 2017 and the Tempe Islamic Community Center wants to do its part to dispel them. Elena Coassolo knows first hand how difficult it can be to find reliable information about Islam. Coassolo, who was raised Catholic, converted to the faith when she was 21.

“This was 2008, this was post 9-11. There was a lot of negativity about Muslims in the media so I wanted to educate myself about who these people are,” Coassolo said.

Coassolo headed to a Barnes & Noble and bought two books: Islam for Dummies and an English translation of the Quran. 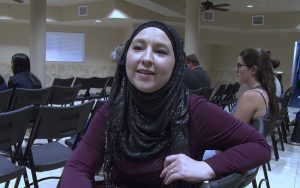 She ended up at the Tempe Islamic Community Center and the more time she spent there, the more intense the pull to Islam became.

“At that point, there was a decision. I could pretend I had never discovered this and go on living my life as I had before but know I was living a lie or I could accept and embrace this religion,” she said. “So that’s what I chose to do.”

Now, Coassolo said, it’s important for her to be part of events like the Mosque Open House because she remembers what it was like to be on the other side.

After eating pizza and watching the film on Islam, attendees were invited to watch a traditional Muslim prayer. They sat in the back of the mosque and watched as members prayed. Some joined in toward the end, once they figured out the rhythm of the prayer, including when to kneel and when to stand.

This was the first time Josie Sherwood, an ASU student majoring in global studies and member of the Church of Jesus Christ of Latter-day Saints, had ever set foot inside a mosque. She said the only moment that surprised her was when men and women were instructed to enter the mosque through separate entrances.

“I always thought that Muslims were really different from Christians,” Sherwood said. “But there were a lot of similarities and things weren’t as different as I thought they were going to be.” 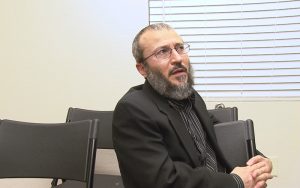 “Lots of people will change their opinion about you immediately when you talk to them,” Hlayhel said. “I think that is essentially the best way and the most effective way because it works on a human level.”

Hlayhel said the Muslim community must be proactive. President Donald Trump infamously proposed a “Muslim ban” during his campaign and since his election, Hlayhel said tensions are surfacing.

“Those lone voices that in the past were really in the margin, I think it’s becoming mainstream now,” he said. “It made them more bold.”

The organizers of the event did request the presence of police and the Tempe Police Department obliged. Coassolo said there’s always the fear that something could happen, especially since armed protesters have showed up to mosque events before.

“It would be easy for someone to come and do a violent act but I don’t want to let that control us,” she said. “That shouldn’t stop us from meeting each other.”

And it didn’t, at least not Friday night.