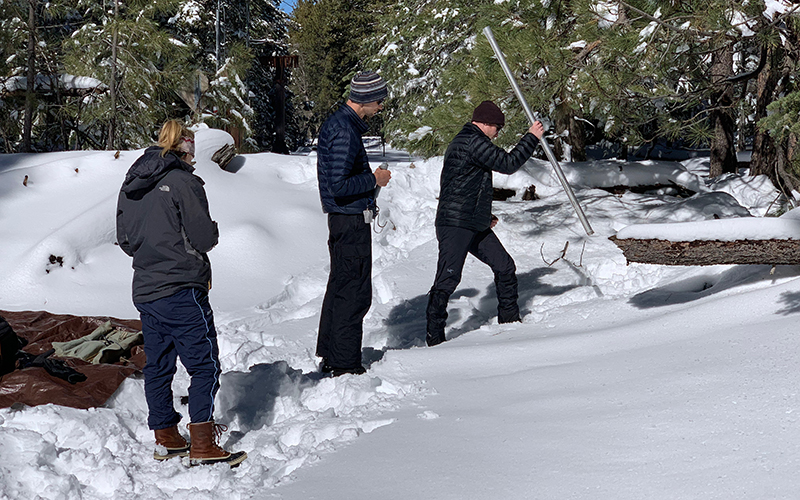 Charlie Devine (left) and Patrick Broxton, both with the University of Arizona, get ready to measure snowpack near Strawberry. (Photo by Jordan Evans/Cronkite News)

TUCSON – Northeastern Arizona no longer is dealing with extreme drought, thanks to ample fall and winter precipitation, making this season’s snowpack one of the most abundant in awhile, the Arizona Department of Water Resources reports.

In addition, it said, soil beneath the snow is saturated, which means there should be significant spring runoff to partially replenish the streams, rivers and reservoirs on which the West depends. As of this week, 73 percent of Arizona was deemed free of drought, although the Four Corners area remains in severe drought.

Researchers at the University of Arizona are working to find better ways to track snowpack in Arizona and across the U.S. The team has been collecting snowpack data since 1981, and they now can map changes in snow mass across the country over the past 35 years onto grids that are 2.5 square miles.

Professor Xubin Zeng, who leads this work, said the results will change how people track snowpack in the future to better deal with diminished water sources in the warming and drying West.

There are tens of thousands of volunteers across the country measuring snowpack. Zeng said he and his fellow researchers have combined that information with government measurements to create a consistent data set that can give greater detail on snowpack than historical ways of measuring snow. All this information is used to map the snowpack on every inch of land in the U.S., which has not been done before.

Zeng’s team has discovered that although snowpack in the eastern U.S. is doing well, it has diminished across the West. In fact, it has declined so much that if all that snowpack was combined together, it would be about the size of South Carolina.

Snow water equivalent, or SWE, describes how much water is in snowpack. Declining SWE is strongly correlated with long-term climate change. Climate Signals, a science information project of the nonprofit Climate Nexus, said human-caused global warming is the main cause for reduced snow cover.

According to the National Centers for Environmental Information, this winter has been the wettest on record for the contiguous U.S. Precipitation amounts have increased lately, and it has been colder in many parts of the country. 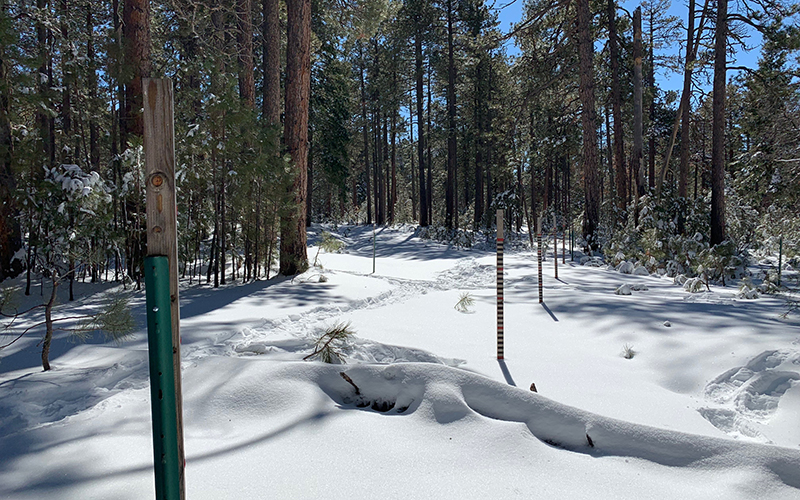 Arizona is having a good snow year. As of this week, the state Department of Water Resources reports, 73 percent of Arizona is not under drought conditions. (Photo by Jordan Evans/Cronkite News)

How tracking snow has changed

“We just thought it (drones) would be a good way to measure snow depth because they’re using it for similar types of purposes,” he said.

The UA researchers are passionate about their studies because their findings could help predict changes in the water cycle and climate change.

NASA is working with them to send a satellite into space. The satellite will track snow measurements across the entire U.S.

In about a year, the researchers hope to finish their research so other scientists can use their data.