Gallego, who was leading the runoff by 24,000 votes Wednesday afternoon, thanked cheering supporters in downtown Phoenix at her watch party Tuesday night. 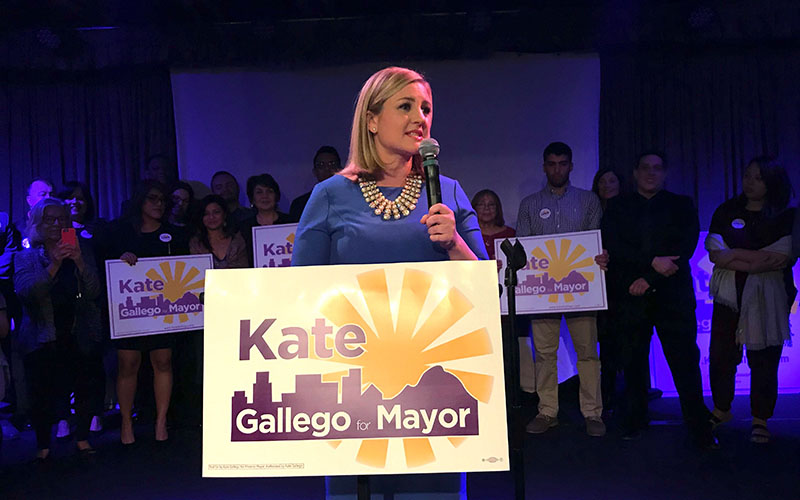 Margaret T. Hance was Phoenix’s first female mayor, elected to four terms from 1976 to 1984. Longtime councilwoman Thelda Williams has served as interim mayor twice, including most recently after Mayor Greg Stanton resigned last May to run for Congress.

Valenzuela, a Glendale firefighter, conceded early Tuesday night in a tweet congratulating Gallego on her win.

In a special election last November to replace Stanton, now a U.S. congressman representing Arizona’s 9th District, Gallego did not reach the 50 percent plus one requirement to claim a majority of the vote, triggering the runoff. Valenzuela was her closest challenger in a field of four but still lagged significantly.

Gallego pushed for fiscal responsibility during her campaign and expressed concern about using city funds for the controversial Talking Stick Resort Arena renovations deal, the subject of several debates with Valenzuela.

Valenzuela believed investments such as the arena deal would create economic growth for the city and bolster public safety ranks, a staple of his campaign.

The two former City Council members, both Democrats, repeatedly said they would campaign on a positive note but slammed each other with claims of shady campaign-finance practices.

In flyers mailed to voters in mid-January, Valenzuela accused Gallego of being a “Chicago-style politician who wants to radicalize the city of Phoenix.”

“We overcame doubters, rain, dark money and a lot of it,” Gallego said in her victory speech Tuesday night.

Gallego invited supporters to her swearing in ceremony March 21 at Comerica Theater.