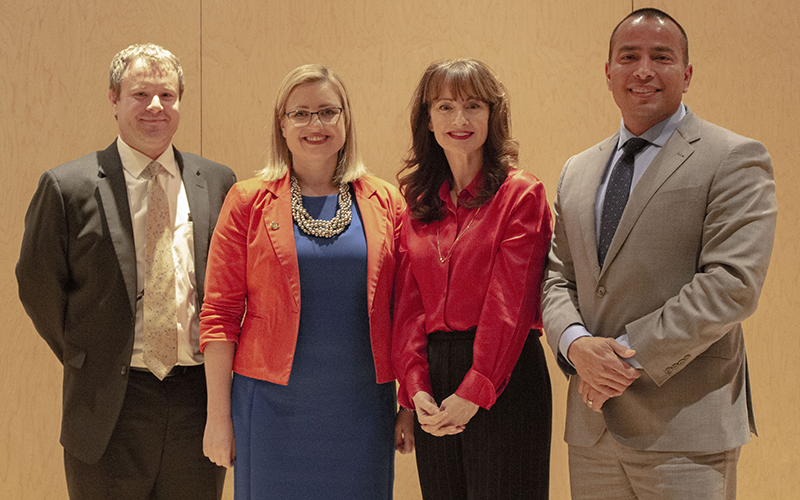 The former City Council members, both Democrats, will face each other in a runoff on March 12. Early voting began Wednesday.

“We have a lot of opportunity ahead of us and some difficult choices,” she said. “Sometimes you need to prioritize.”

Pointing to his time as a firefighter, Valenzuela pushed for additional hiring of police and fire personnel while asserting that attracting more tech jobs would be a key to economic growth for the city.

“I want a fully funded Police Department and Fire Department,” Valenzuela said. “I want Phoenix to continue to be a hub of industry.”

Tensions flared over how the city should handle renovations of Talking Stick Resort Arena, home to the Phoenix Suns, with each candidate visibly displaying disdain for the other’s plan.

Valenzuela urged Phoenix to take advantage of the opportunity to have a “city-owned asset” that is an economic generator. He said the arena, which opened in 1992, will continue to bring millions of tourism dollars that could be used to fully funding public safety needs.

Gallego opposed any city funds going towards the arena and believes it is “not the best investment” and that the city has other priorities the money could go to.

“Professional sports are among the most lucrative businesses out there,” Gallego said. “I believe they should pay for their own facilities, their own buildings.”

Both candidates agreed Phoenix should continue its efforts towards relying on renewable energy and becoming a sustainable city, but they differed on how to handle such issues as homelessness and light rail.

Gallego said affordable housing is “the first solution” to help people living on the streets get back on their feet, adding, it’s “easier to address (their problems) if someone is in a stable living environment.”

In addition to affordable housing, Valenzuela proposed that the city should “lead with services” in conjunction with non-profit organizations to understand why someone became homeless in order to help them find jobs.

“The homeless issue isn’t working for anyone,” Valenzuela said. “It isn’t just affordable housing, we have to make sure people are getting trained for the jobs they want.”

In regard to the light rail, both candidates supported the recent expansion project but had differing positions on how the potential return on investment should be used to benefit the city.

Valenzuela considered the light rail an “economic driver” but insisted the project be used as a tool to “fully revitalize and renovate our community.” Gallego proposed additional long-term projects be enacted to improve infrastructure, especially local roads.

The candidates ended the debate priding themselves on how each has run “positive campaigns” only touting their achievements.

However, the Valenzuela campaign mailed out a flier dated Jan. 15 labeling Gallego as a “Chicago-style politician who wants to radicalize the City of Phoenix” to which her campaign responded by organizing a “Chicago-style pizza party” as a fundraiser.

Valenzuela defended the flier after the debate, stating “I framed it as a Chicago-style, strongarm type of politics that simply does not belong in our city.”

Other fliers have been sent out by groups not related to either campaign attacking both candidates.

Tuesday’s debate was hosted by KJZZ. The candidates will debate again Wednesday and Friday night.