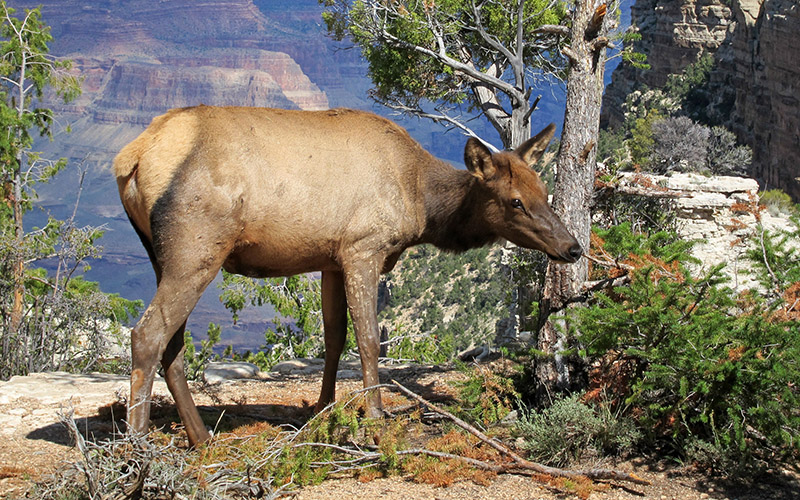 Elk are among the big-game species, along with bison and mule deer, that hunters can go off-road in their vehicles to retrieve in Kaibab National Forest, under rules upheld by a federal court. (Photo by Michael Quinn/National Park Service)

A three-judge panel of the 9th U.S. Circuit Court of Appeals rejected environmental groups’ claims that letting hunters drive up to a mile off designated forest roads to harvest game would open “the entire forest” to off-roading, damaging the forest and endangering wildlife.

The court said the Forest Service did not abuse its discretion when it implemented the Travel Management Rule because it “satisfied its procedural obligations” and put other environmental safeguards in place.

“We do not disagree with plaintiffs’ assertion that motorized big-game retrieval can have a negative effect on the environment,” Judge Milan Smith Jr. wrote in the opinion. “But we nevertheless conclude that the environmental impacts … did not raise substantial concerns.”

Calls seeking comment from the Forest Service and from hunting organizations that had defended the off-road plan were not immediately returned Wednesday. But environmental groups said they were disappointed in the ruling.

Sandy Bahr, director of the Grand Canyon chapter of the Sierra Club, said it was “already challenging to get enforcement” on off-roading violations before the ruling.

“There’s certainly an increase of irresponsible off-roading,” she said, noting that vehicles can cause “real harm” to the forest that is sometimes unfixable.

The case goes back to 2005, when the Forest Service updated its rules for road use in three sections of the Kaibab forest. The new rules actually reduced the miles of road that are open to off-roading and limit it to hunters who are retrieving bison, elk and mule deer.

Environmental groups sued, charging that the service needed to take a closer look at the impact of off-roading. But a district court disagreed and the circuit court upheld that ruling, pointing to safeguards like a requirement that hunters “use the most direct and least ground disturbing route” to retrieve the animal.

Judi Brawer, a program director at WildEarth Guardians, said that is not a realistic expectation.

“I don’t want to speak for all hunters, but most hunters are not going to figure out what the least invasive route is,” said Brawer, whose group was one of those who sued. “They are going to take the easiest route.”

Brawer said WildEarth Guardians had hoped the court “would see opening the entire forest to off-road vehicles is not in line with travel management planning.”

But the court pointed to other restrictions in the new rules: Hunters can only use vehicles to retrieve big game, and they are restricted to one vehicle and are only allowed during hunting season. Smith said those regulations suffice as a “reasonable interpretation” of environmental rules by the Forest Service.

The environmental activists also cited a number of endangered species in the area, including the Mexican spotted owl, and warned that motorized travel could damage ancient Native American artifacts still in the area.

Brawer said she is concerned this ruling may set a precedent for future rulings, allowing other forests to “push the envelope” when it comes to their own Travel Management Rules. Still, she said, she is optimistic that forest management is being discussed now.

“Forest management is a good thing,” she said. “We may have disagreed with how they did it, but they are limiting it more than they did previously.”

But Bahr said the Forest Service is still allowing a “pretty disturbing” amount of activity to take place.

“It’s a bad plan,” she said. “The Forest Service has not done what it was tasked with doing.”