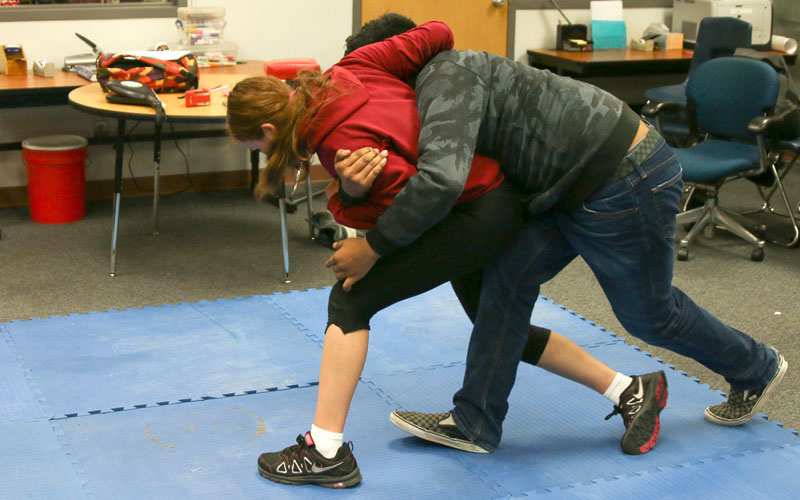 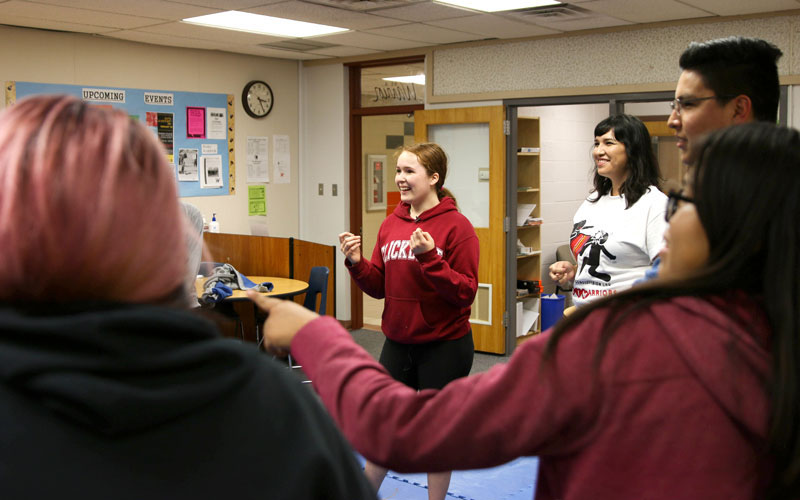 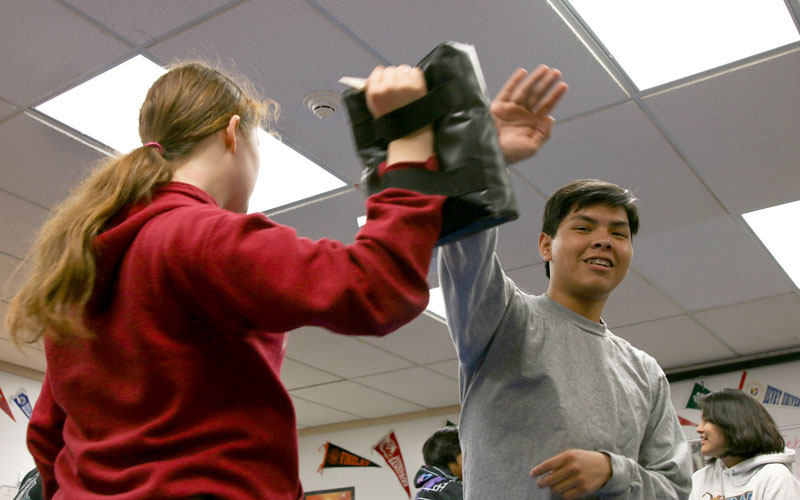 Travis Tucker, 16, uses the base of his palm to strike rather than his fist, to avoid breaking his fingers. (Photo by Meg Potter/Cronkite News)

MESA – With kicks, blocks and twists of the wrist, 16-year-old Kylie Hunts-in-Winter is teaching Native American boys and girls to stay safe.

Her defense classes have a mission: to keep more indigenous women and girls from disappearing and dying. An estimated 500 have been lost to violence over the past decades, but experts said the number is under-reported. 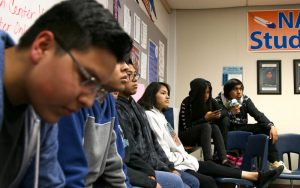 Members of the Native American Club at Westwood High School in Mesa learn ways to protect themselves from violence, which an estimated 80 percent of Native women are likely to experience in their lifetimes. (Photo by Meg Potter/Cronkite News)

“Native women are more likely to be a target of attacks and will need to defend themselves more,” Hunts-in-Winter said as she taught members of the Native American Club at Westwood High School.

Hunts-in-Winter, a member of the Standing Rock Sioux Nation, said she teaches people so they can teach others.

“I’ve been doing martial arts since I was 3 years old,” she said. “My dad walked me into the dojo – as a young girl, he wanted me to be able to defend myself. As I progressed more in martial arts, I started to love it.”

Souta Calling Last, executive director of an educational nonprofit Indigenous Vision, said the class is one more way to educate others about violence inflicted on Native women. The awareness movement is known as #MMIWG, for missing and murdered indigenous women and girls.

“There has been a missing, murdered indigenous women’s movement that has been striving to get awareness, mainstream awareness about how many women in our community are met with violence and are disappearing,” Calling Last said. “In most instances, our cases are not looked into at all.”

A study that began in 2017, by the Urban Indian Health Institute identified 506 cases of missing and murdered American Indian and Alaska Native American women and girls in 71 cities across the country. It also states that the number of cases is likely an undercount due to the limited resources and poor data collection.

“It could be me,” Calling Last said. “An unprecedented amount of women from my community are disappearing at alarming rates and it’s an epidemic in Canada and the U.S. The epidemic hits as close as worrying about my own sisters and myself.

“It’s important that we take our protection into our own hands and with these self-defense classes we give the girls the ability and the empowerment of a tool.”

Hunts-in-Winter has a black belt in Kenpo karate and holds belts in other martial arts. She highlights videos of other women in martial arts on her Instagram page, which has nearly 40,000 followers, some of whom tell her their personal stories of survival.

“I heard about someone who has been a part of human trafficking, someone who has gotten away, and just so many dangerous scenarios,” Hunts-in-Winter said. “But because they could defend themselves, they were able to be safe.”

A major part of self-defense is verbal.

“I think the most important thing is, don’t leave where you are. Stay in a public place,” Hunts-in-Winter said. “As soon as you’re taken away from the public place, you’re a lot less likely to be able to get away.”

Hunts-in-Winter will teach classes next month on her reservation and this summer at a camp in Montana for Native American girls in foster care.