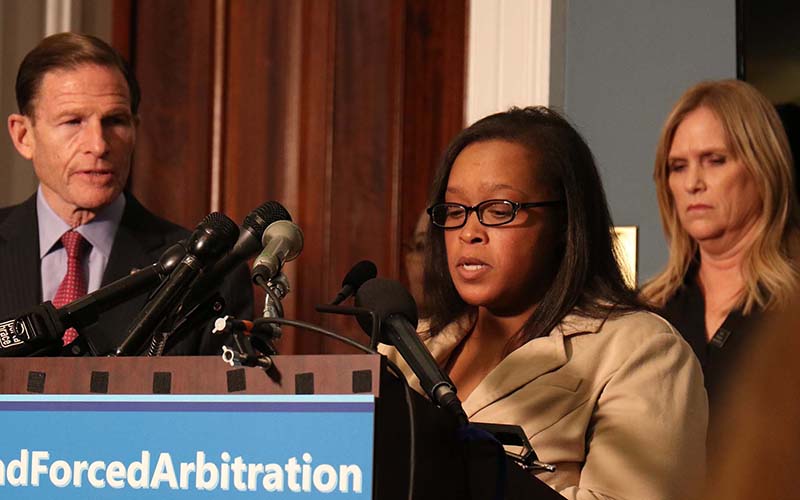 Maricopa resident Akeala Edwards was surprised to find that she could not sue the online lender who she said extended her loan wihtout her knowledge, because the paperwork for the loan included an arbitration clause. (Photo by Andrew Howard/Cronkite News) 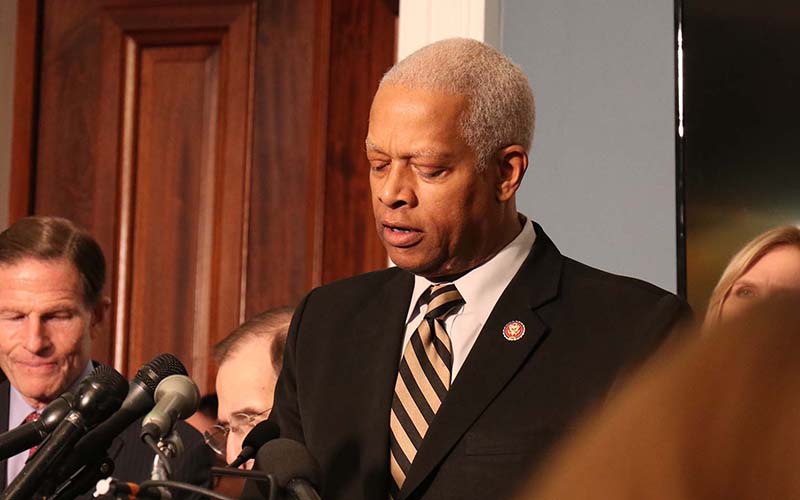 WASHINGTON – Maricopa resident Akeala Edwards was a student and a parent when she took out an online payday loan to help her get by, electronically signing the accompanying documents with little thought.

It wasn’t until after the lender renewed her loan without her knowledge that Edwards learned that the paperwork she signed included a mandatory arbitration clause. That meant she could not go to court but had to take the dispute to arbitration.

“They were stealing money out of my account,” said Edwards, who was in Washington Thursday to support legislation to prohibit such arbitration agreements

That legislation, the Forced Arbitration Injustice Repeal Act, would prohibit clauses that force people into arbitration in consumer, job, civil rights or other disputes.

Sen. Richard Blumenthal, D-Connecticut, said he is sponsoring the Senate version of the bill because the current system of forced arbitration is “unfair, unjust and un-American.”

“One of the systems that is truly rigged is … our current system of forced arbitration,” Blumenthal said at an event Thursday to introduce the legislation. “Forced arbitration deprives people of that basic right to appear in court in public, on the record, fairly before a neutral decision maker.”

The FAIR Act was the primary piece of a package of bills unveiled by various lawmakers Thursday, including measures that would block forced arbitration for nursing home residents, members of the military and victims of workplace sexual harassment.

A spokesman for the American Arbitration Association said the organization cannot comment on specific legislation, but he did offer a defense of arbitration in general, saying it has its benefits.

“People find arbitration quicker and more efficient than litigation,” said Michael Clark, the spokesman. While there may be concerns with forced arbitration, ultimately, he said, “You signed the contract.”

Clark refuted complaints about the confidentiality of the arbitration process.

“The process is confidential, but the parties can say what they want,” he said. “You could stand in Times Square on a soapbox if you want.”

But Rep. Hank Johnson, D-Georgia, the lead sponsor of a House version of the FAIR Act, said consumers should not be denied their “indelible constitutional right” to a trial. The bills would fix that, he said.

Johnson said former Supreme Court Justice Sandra Day O’Connor supported the right to trial. But since her retirement, he said, the court has moved with “reckless abandon” to protect arbitration, in decisions that he said have created a “private, for-profit legal system” that is stacked against those who sign contracts that force arbitration.

The event included numerous people like Edwards, who had been forced to agree to arbitration to get a job or buy a product. That included Google program manager Tanuja Gupta, who joined other workers at the tech company in a walkout to protest its forced arbitration policy.

Gupta said the policy of forced arbitration, which Google recently dropped, “strips individuals of the ability to seek justice.”

“Now, time is up for all corporations, and all their subsidiaries and suppliers, across all sectors,” she told a packed room in the Capitol.

Edwards said she was ultimately able to get her case into court, where she won – even though her attorney initially noted that she had signed the arbitration clause when she accepted the loan’s terms and the lender wanted to arbitrate.

Edwards vowed to keep fighting for awareness of forced arbitrations, adding that she does not want others to have to go through what she did.

“If consumers don’t know that they may be privy to the arbitration clause, than this can also happen to them,” Edwards said.