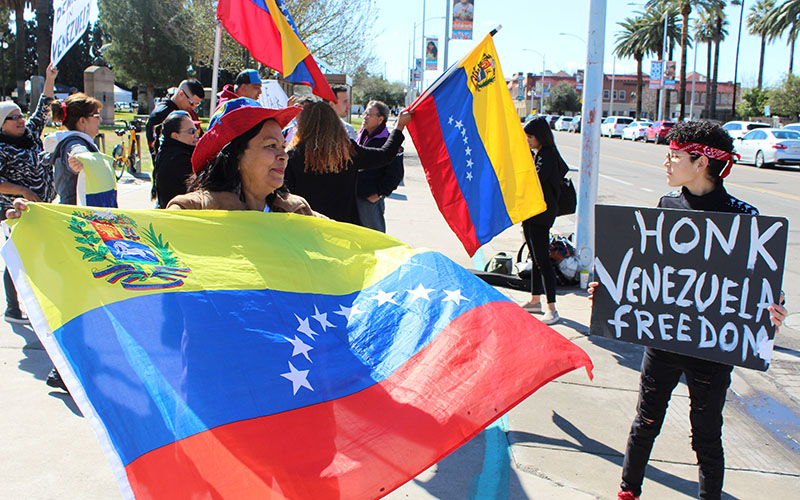 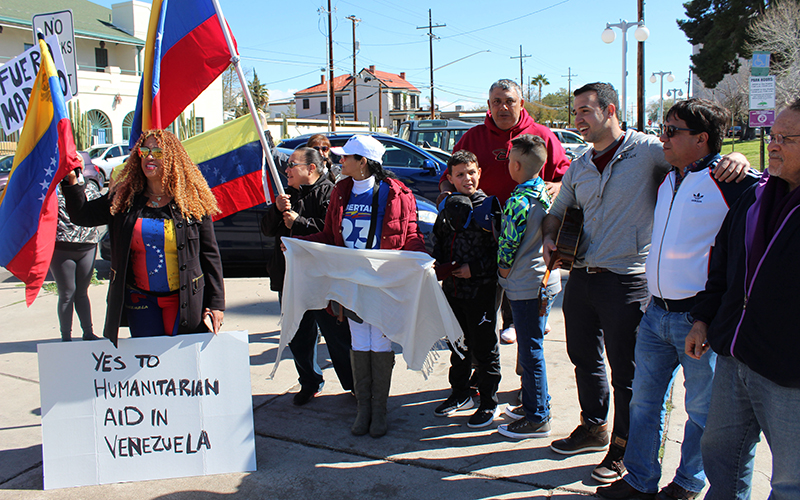 Venezuelan immigrants gather at a street corner near Armory Park to protest against Nicolás Maduro’s presidency in Venezuela and to support U.S. aid to the country. (Photo by Nicole Ludden/Cronkite News) 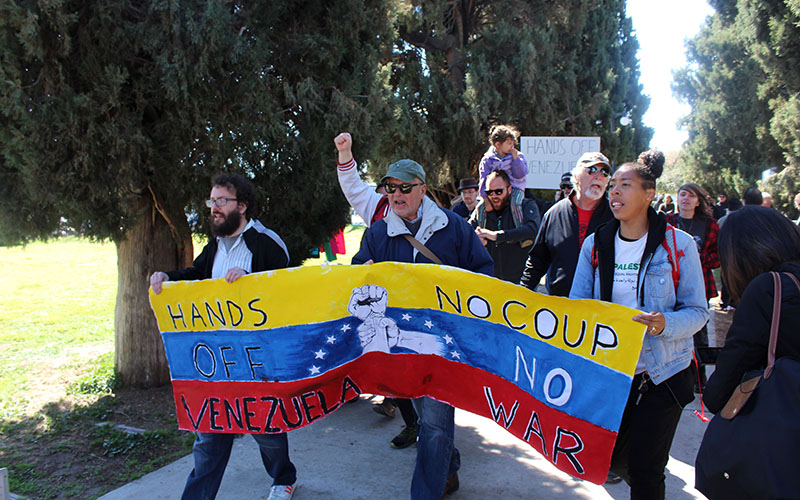 TUCSON – On the corner of 12th Street and Sixth Avenue, several Venezuelans stood with arms linked, singing along to an acoustic guitar and dancing against a vibrant backdrop of large yellow, blue and red flags.

The group, made up primarily of Venezuelan immigrants living in Arizona, supports and encourages U.S. involvement in their home country, where the long-running political and humanitarian crisis has deepened in recent days. They showed up to make their voices heard at the Tucson Peace Fair, which met at Armory Park to oppose American intervention.

Ricardo Hinds, a Venezuelan who has lived and worked in the U.S. for 40 years, said the situation in his home country is dire.

“It’s the lowest our country could be. We don’t have practically anything,” Hinds said. “What I can tell you is that there’s just no medication, people are dying, kids are eating from the trash cans.”

After the protesters dispersed, another group gathered on the same corner. Members of several organizations that were participating in the peace fair spoke into a megaphone, chanting the slogan on the hand painted yellow, blue and red sign they held: “Hands off Venezuela.”

Two opposing views that came face to face during Tucson’s Peace Fair. On one side, Venezuelan nationals who want U.S. intervention in their country and on the other, local advocacy groups who do not.

The demonstrations in Tucson took place one month after the U.S. recognized Juan Guaidó as the rightful president of Venezuela.

In the South American country, protests have not been peaceful. Violence broke out over attempts to access U.S.-sent humanitarian aid across Venezuela’s borders with Brazil and Colombia over the weekend. The food and medicine is being blocked by President Nicolás Maduro, who says the United States is trying to fabricate a crisis in his country.

According to the Center for Strategic and International Studies, 90 percent of the Venezuelan population has dropped below the poverty line, causing “Extreme food and medicine shortages,” “thousands of children dying of malnutrition,” and “rampant crime in every city.”

The clashes between members of loyalists and opposition forces in Venezuela has left at least four dead and hundreds injured among conflict with government forces.

Many Venezuelans living in Arizona experienced the turmoil of their home country firsthand, and they continue to follow the chaos from abroad.

Samir Rachid Zaim moved to the U.S. from Venezuela in 2010. He showed up to the peace fair to share his opinion. 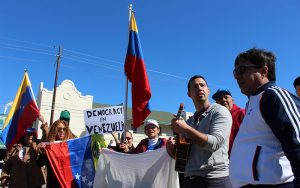 Venezuelan natives advocate for U.S. involvement in their home country. As a sign of solidarity, Samir Rachid Zaim played the guitar as the group sang songs in Spanish supporting their cause. “We’re here in solidarity to show support. To show that we’re out here caring for them. We’re thinking about them, wishing we were there with them,” Zaim said. (Photo by Nicole Ludden/Cronkite News)

“We’re here because our country needs help, humanitarian aid, food, medicine, basic supplies,” Zaim said. “We would love to be there fighting on the front lines with them, but we’re here in solidarity to show support.”

The group of Venezuelans received supportive honks from passing cars as they held signs demanding, “Democracy in Venezuela” and “Yes to humanitarian aid in Venezuela.”

Loyalists and the military continue to back Maduro, but opponents say he was illegitimately re-elected in January to serve another six-year term as president.

More than 60 countries, including the United States, have currently recognized Guaidó as the rightful president of Venezuela.

“We continue to hold the illegitimate Maduro regime directly responsible for any threats it may pose to the safety of the Venezuelan people,” President Donald Trump said in a statement.

Maduro has responded by cutting diplomatic relations with the U.S., and the U.S. has imposed heavy sanctions on the country.

Vice President Mike Pence met with opposition leader Guaidó in Colombia on Monday for a summit, and announced more sanctions will be imposed to oppose Maduro, this time against those supporting him.

At @POTUS‘ direction, effective today, the U.S. will impose sanctions on additional members of Maduro’s inner circle. These men worked to block aid for people in need and suppress peaceful protests – and their actions will not go unpunished. #VenezuelaLibre

One of the highest points of contention is access to humanitarian aid sent by the U.S. in order to quell the growing humanitarian crisis in Venezuela.

Despite this, Maduro’s forces have maintained a blockade on access to aid sent by the United States.

“It’s a special type of cruelty to have its government let its people die in the name of a political game,” Zaim said.

However, many organizations at the Tucson Peace Fair denounced the aid sent by the U.S. to Venezuela.

Jim Byrne, an organizer with the Tucson Anti-War Committee, believes the U.S. should lift sanctions to combat the ongoing humanitarian crisis instead of sending in shipments of physical aid.

“The sanctions have a far greater economic impact, and a more immediate impact than any packages of food,” Byrne said. “There’s not a shortage of food, there’s a shortage of money because of the hyperinflation.”

Given the troubling conditions in Venezuela, Ricardo Hinds wants to see U.S. aid enter the country.

“We can’t let 22 million people die. Eating one meal a day. I mean it’s disturbing,” Hinds said. “I mean, it’s like if you have a neighbor. You see your neighbor being abused. What do you do?”

Opponents to U.S. involvement pointed to the U.S. history in Latin America.

“I believe that our country has a horrible imperialistic past and reputation for extracting resources from other countries for the sole reason being money and greed, and it’s dangerous and we can’t do it anymore,” said Mary DeCamp, president of the Tucson Peace Center, which hosted the fair. 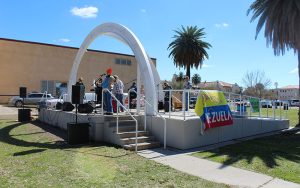 Mary DeCamp, president of the Tucson Peace Center, which hosted the Tucson Peace Festival on Saturday, takes a public “Hands off Venezuela” stance onstage. “I believe that our country has a horrible imperialistic past and reputation for extracting resources from other countries for the sole reason being money and greed,” DeCamp says. (Photo by Nicole Ludden/Cronkite News)

Although most groups at the peace fair held this point of view, they took note of the Venezuelan natives who support U.S. involvement.

“I’m happy to have them,” DeCamp said. “I support free speech, it’s as a gift to the community, so that all voices can be heard. They’re most welcome, I just don’t agree with intervention, especially military. I want our war dollars brought home.”

“For the counter demonstrators here that want the aid to come, the better demand is to get the United States to lift the sanctions,” Byrne said. “That would lift billions of dollars and available economic financial loans to come in, whether that’s food or medicine. But it would also allow prices to restabilize.”

However, the Venezuelan protesters argue that aid in their home country is not a political, economic or military issue.

“Once it’s a humanitarian issue, it’s beyond politics because it’s about people,” Zaim said. “It’s our job as Venezuelans abroad to be ambassadors of our country to share our message.”

As self-proclaimed ambassadors of their country, the protesters also shared their views on the country’s controversial president.

“Maduro, he’s going to be out no matter what,” Hinds said.

However, Byrne said the economic crisis in Venezuela is not Maduro’s fault.

“All of this is a political and economic weapon to make the Maduro government look ineffective, look brutal,” he said. “Actual, legitimate democratic processes elected Maduro for a second time.”

Ultimately, the groups supporting “Hands off Venezuela” want exactly what the name suggests.

However, Venezuelans say at this point, there is no other option left.

“We need the humanitarian help for the country because there’s no food, people die every single day,” said one Venezuelan protester, Glicerdys Sifontes. “Whatever the motivation they have for this, this is not a political thing. It’s not Trump, it’s not Maduro. It’s the United States offering help to Venezuela, and we want to say no, but we have to say yes.”