Former Arizona Rep. Gabrielle Giffords joined other victims of gun violence and lawmakers outside the Capitol to rally for a background-check bill by Rep. Mike Thompson, D-Califorina, left. (Photo by Andrew Howard/Cronkite News) 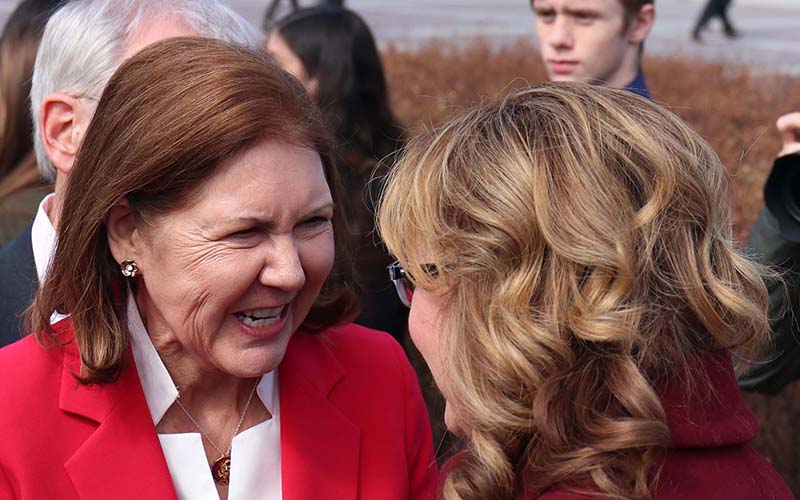 Rep. Ann Kirkpatrick, D-Tucson, greets Gabrielle Giffords, who was representing Tucson when she was shot in a 2011 attack. Giffords was at the Capitol to rally support for a gun background-check bill. (Photo by Andrew Howard/Cronkite News) 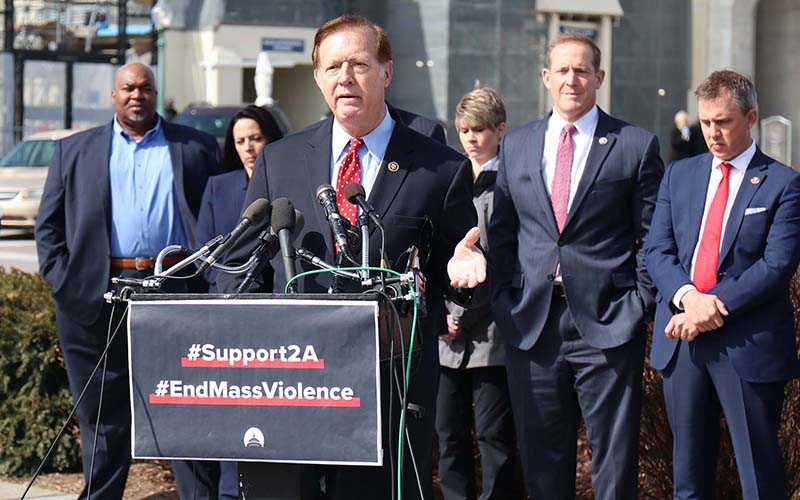 Rep. Randy Weber, R-Texas, joined other Republicans speaking out against the background-check bill, with Weber saying the best defense against a bad person with a gun is still a good person with a gun. (Photo by Andrew Howard/Cronkite News)

Giffords, the victim of a 2011 shooting that still makes it hard for her to walk and speak, was surrounded by other survivors, and by members of Congress like Rep. Mike Thompson, D-California, the bill’s sponsor, who called it “a great day for everyone who wants safer communities.”

“Now is the time to come together, to be responsible,” Giffords said, in what has become her standard speech on the issue. “Democrats, Republicans, everyone, we must never stop fighting.”

But the Bipartisan Background Check Act of 2019 has just five GOP co-sponsors to 228 Democrats who have signed on, and Republicans who spoke Tuesday were having none of it. Many were like Rep. Debbie Lesko, R-Peoria, who said the measure is “well intentioned, but will not solve the problem.”

“HR 8 would not have prevented any of the mass shootings in the last 20 years,” Lesko said on the House floor Tuesday. “Criminals don’t get guns legally, and will not complete a background check to get their guns.”

At a Capitol rally just moments after Giffords, Rep. Doug Collins, R-Georgia, said the background check bill, which could come up for a vote Wednesday by the full House, will end up being “just another bumper sticker and another broken promise.”

The bill would expand the current federal law to require background checks for any gun transfer to make sure firearms do not end up in the hands of people who are prohibited from possessing them, like felons or applicants with a mental illness. It includes numerous exemptions for gifts and for gun transfers between family members.

Victims of gun violence who rallied Tuesday with Giffords said the restrictions are long overdue.

“I can’t even distinguish fireworks from gunshots,” said Audrey Wright, a Chicago high school student and president of Peace Warriors, a youth-led group against gun violence.

Megan McGuire is a survivor of the shooting last May that killed 10 in her high school in Santa Fe, Texas. She told the crowd that gun violence “has impacted my
generation like never before” and that if lawmakers do not vote for the bill they “fail our country and fail our children.”

But Rep. Randy Weber, R-Texas, whose district includes Santa Fe High School, disagreed, saying that “guns don’t cause crime more than computers cause pornography.” Lesko – who tried unsuccessfully with other Republicans on Monday to amend the bill with additional exceptions – charged that, as written, it would “turn everyday law-abiding citizens into criminals.”

Despite GOP opposition, the bill is virtually assured of House passage, with 233 co-sponsors. But it faces an uncertain fate in the Senate, where Thompson said it could be bottled up in the Judiciary Committee.

Rep. Ann Kirkpatrick, D-Tucson, said that would be unfortunate, calling the bill “commonsense gun legislation” that “many people in this country want to see … passed.”

“I’ve been a supporter of this legislation which came from Giffords since they first issued it, and I’m very optimistic it will pass the House,” she said.

Kirkpatrick holds the congressional seat that Giffords held when she was shot Jan. 8, 2011, while attending a “Congress on Your Corner” event at a Tucson grocery. Six people were killed in that attack and 13 wounded, including Giffords, the target of the gunman.

Giffords, who has since dedicated herself to passing gun-safety laws, said it takes “the courage to do what’s right, the courage of new ideas” to stop gun violence.

“I’ve seen great courage when my life is on the line,” she said Tuesday. “Be bold, be courageous, the nation is counting on you.”

Kirkpatrick said she brought back the Congress on Your Corner event, returning to the same grocery store this year where Giffords was shot in 2011.

“It’s really part of the healing process, it’s the final step,” Kirkpatrick said. “We’ve all suffered through this, we will never forget it, but life goes on.”