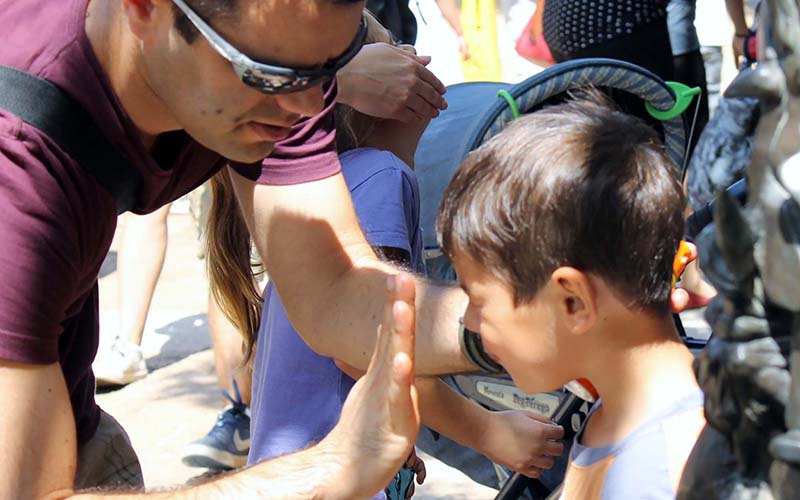 Even as they say they want to review the ingredients in and labeling of sunscreen, Food and Drug Administration officials are urging people to keep slathering it on to protect against skin cancers. (Photo by Sharon/Creative Commons)

WASHINGTON – The Food and Drug Administration wants to take a closer look at the ingredients and labeling for sunscreens, hoping to update regulations that the commissioner said have not been changed “in literally decades.”

Among the proposed changes FDA Commissioner Scott Gottlieb outlined Thursday are limits on the upper end of SPF ratings – one official said there is “no data to support benefits above SPF 60” – and tighter restrictions on the types of ultraviolet rays sunscreens block.

But none of that should be used as an excuse not to slather up, “given the recognized public health benefits of sunscreen use,” Gottlieb said on a conference call Thursday.

Lisa Quale, health educator for the University of Arizona Skin Cancer Institute, said the proposed regulations seem “great” and that the changes should make buying sunscreen easier for consumers. Quale was most excited by the proposal to cap sunscreen labels at SPF 60, a move the FDA has been talking about “for years.”

Currently, she said, when consumers buy a sunscreen labeled as SPF 100, “In their minds they are getting 100 percent. Which it isn’t.”

Calls seeking comment from industry groups on the proposed regulations were not immediately returned Thursday. But an official with the Environmental Working Group said the regulatory review is long overdue.

“After more than 40 years, the FDA is at last taking serious steps to finalize rules that would require sunscreen companies to make products that are both safe and effective,” David Andrews, an EWG senior scientist, said in a statement.

Among the proposals, the FDA said it plans to include sunscreen sprays, oils, lotions, creams, gels, butters, pastes, ointments and sticks as being generally regarded as safe and effective and eligible for over-the-counter sale. It said wipes, towelettes, body washes, shampoos, insect repellents and other products containing sunscreen will not be on that list without additional data showing them to be both safe and effective.

Besides the two harmful ingredients, the FDA found two other ingredients – zinc oxide and titanium dioxide – to be safe. But it said it needs more data to determine whether 12 other commonly used ingredients can be categorized as both safe and effective.

Theresa Michele, director of the FDA Division of Nonprescription Drug Products, said the proposed regulations would also rein in a manufacturers’ ability to make claims about the effectiveness of their sunscreens.

Sunscreen testing returns a range for the SPF, or sun protection factor, of a product and manufacturers are currently allowed to claim the highest SPF from those tests. The new rule would force them to use the lowest SPF number on their labels.

Since current tests return a “fair amount of variability” in SPF, Michele said, requiring the lowest number in the test will make it easier for consumers to know what they are buying.

“You can’t merge those two things easily,” Quale said, but increasing broad-spectrum protection is “just a matter of putting in the right ingredients.”

Quale, who said sunscreen is “kind of my thing,” welcomed the review but echoed Gottlieb’s call for people to continue to use sunscreens. She said the need is greater in Arizona because of the state’s proximity to the equator and because the heat means people are not typically as covered up.

“It’s more important here, we are getting more intense heat year-round,” she said.