Senate Bill 1046 would prohibit voters from dropping off their early ballots on Election Day. Sen. Michelle Ugenti-Rita, who sponsored the bill, said that this would reinforce voting by mail and voting in-person. (File photo by Jesse Stawnyczy/Cronkite News)

PHOENIX – The Arizona Senate is considering a measure that would prohibit early voters from dropping off their mail-in ballots on Election Day, a move advocates say would simplify elections and opponents say would hamper voter rights.

The change would mean Arizonans who receive an early ballot would have to mail it before Election Day or vote in person. The move comes as the trend of early voting in Arizona and the rest of the U.S. is on the rise.

Sen. Michelle Ugenti-Rita, a Scottsdale Republican who sponsored Senate Bill 1046, pointed to days-long delays in counting votes in the 2018 election as one reason for the change.

She said the bill would ensure the public gets timely results, necessary for public trust in the election process.

Ugenti-Rita described the last election cycle as “chaotic” and “dysfunctional” and said the early ballots dropped off on Election Day delayed results. It took six days for Democrat Kyrsten Sinema to be declared the winner of Arizona’s U.S. Senate seat.

Ugenti-Rita added the bill would simplify the ways Arizonans could cast their ballots and reinforce the mail-in ballot system and in-person voting systems.

“You get it sent to you and then you return it,” she said of a mail-in ballot. “If that’s something that’s not working for you then become a in-person voter.”

Ugenti-Rita said if voters know their option of dropping off their early ballots was no longer valid, they simply wouldn’t drop them off.

“I take umbrage with this characterization that this is going to be more confusing and because it just won’t,” she said. “It’s not nearly as dramatic as it’s being characterized.”

Those with mail-in ballots who do show up at the polls could decide to cast what the bill calls a “standard” ballot at that location. She added polls are open for weeks for people to cast their vote. Or a voter could simply mail-in the ballot in time for election officials to receive it by Election Day.

“There are a lot of options to accommodate many people who have different voting styles as we can while still maintaining election efficiencies and, of course, the election integrity,” she said.

Several people at a recent hearing voiced support for the bill.

Opponents argue the bill is a form of voter suppression.

“This bill is still one of the worst voting rights bills I’ve seen in my time following the Legislature,” said Joel Edman, executive director of the Arizona Advocacy Network, which works to expand access to the ballot.

“If we’re sacrificing the choice that voters have had for a long time and that hundreds of thousands of voters exercise in every election just to satisfy the impatience of a smaller group of political junkies, is that really a tradeoff worth making?” he said. 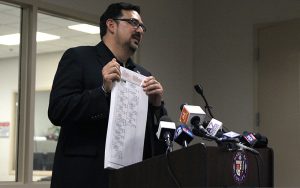 Maricopa County Recorder Adrian Fontes says Senate Bill 1046, which would prevent early voters from dropping their ballots off at the polls, will create a “logistical nightmare” in administering elections. (File photo by Daisy Finch/Cronkite News)

Edman said people may feel more secure that their ballot will be counted if they hand-deliver it. Some voters may also delay returning those ballots by mail because it takes research to make educated decisions about candidates and issues.

Mailing ballots in early also runs the risk that certain candidates may not even be in the race by the time Election Day arrives. Angela Green, a U.S. Senate candidate, pulled out of the race just days before the election. Her name still was on the ballot.

“It’s a solution to a problem that doesn’t exist, and a bad solution at that,” he said. “Under this legislation, a voter would have to completely fill out a totally new ballot, which effectively defeats the purpose of early voting.”

More Americans than ever are taking advantage of absentee and early ballot voting across the nation.

Michael McDonald, an associate professor at the University of Florida who runs the United States Elections Project and tracks early voting, says early voting as a share of the electorate, has increased since states began adopting more expansive early voting options.

More than 1.5 million people in Arizona mailed in early ballots in the 2018 general election.

In the 2018 general election, the early vote surpassed the entirety of all votes cast in the 2014 midterms, according to Garrett Archer, an analyst for the Secretary of State’s Office.

Sophia Solis, a spokeswoman for the Maricopa County Recorder’s Office, said in an emailed statement that during the 2018 midterm primary election, it took seven days to count nearly 700,000 ballots.

But she said it took about the same amount of time to count those ballots as it did in the 2014 primary elections with its fewer ballots.

Counting ballots in Arizona is riddled with complexities, affected by such matters as the type of polling place and what county is conducting the election. Maricopa County has the latest technology to give election officials detailed information about early voters. Some counties still rely on paper rosters.

One of the few standards shared across the state is that voters can drop off their early ballots at any polling location within their county if they miss the mail-in deadline, the Secretary of State’s Office said.

But in Maricopa County, there are thousands of different ballot styles for school districts, city councils, water districts or other types of races in its hundreds of precincts.

Fontes said if the bill were to pass, the county would have to stock every ballot style, of every race, at every polling place to accommodate voters who didn’t know they were no longer allowed to drop off ballots on Election Day. He called that an impossibility.

That’s just in the state’s most populous county. Other questions were raised about how the bill would affect other counties.

Maricopa County and several other counties have electronic poll books that can tell in “live-time” whether a voter’s ballot has been received. A voter with a mail-in ballot who shows up to the polls on Election Day could have their early ballot voided and be given a new one.

But it doesn’t work that way in Pima and rural counties because they use paper rosters, Edman said.

“It’s not about the law being any different. It’s literally about technology and what resources the counties have,” Edman said. “We’re totally for efforts to standardize that. But if you’re going to do it, you have to provide those counties the resources to catch up to where Maricopa County is.”