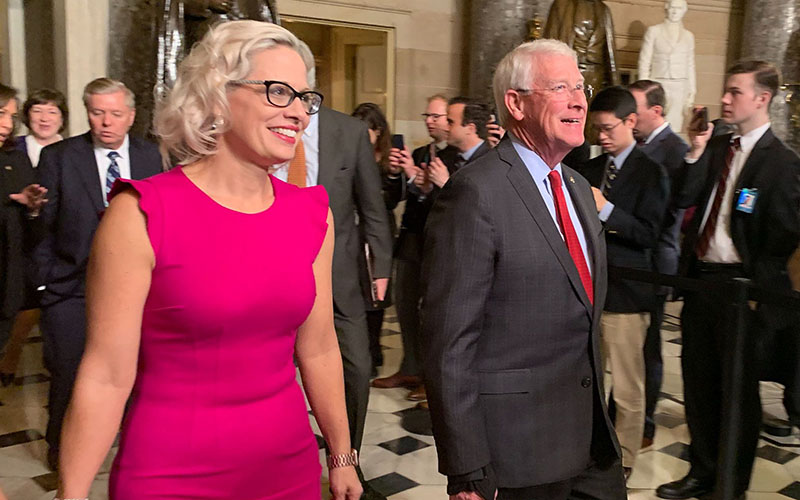 Sen. Kyrsten Sinema, D-Arizona, on her way to the State of the Union address this month with Sen. Roger Wicker, R-Mississippi. In one of her first big votes in the Senate, Sinema sided with Republicans to confirm William Barr as attorney general. (Photo by Andrew Howard/Cronkite News)

WASHINGTON – Arizona Sen. Kyrsten Sinema was one of just three Democrats who crossed party lines Thursday and voted to confirm William Barr as attorney general, despite critics’ concerns that Barr might interfere with probes of the Trump administration.

The Democrats were not the difference for Barr, who was confirmed with a nine-vote margin, and Sinema’s vote was no surprise – besides announcing her intentions this week, she campaigned on a pledge to cross party lines as needed.

“Kyrsten Sinema has shown she is a very smart politician, and knowing that she is a recently elected senator in a traditionally Republican-heavy Arizona, I think it’s not going to be much of a surprise … where she breaks with party ranks,” said Mike Noble, a political analyst based in Scottsdale.

Sinema’s office declined to comment Thursday, instead referring to her statement after her Tuesday meeting with Barr. She said then that she evaluates nominees “based on whether he or she is professionally qualified, believes in the mission of his or her agency, and can be trusted to faithfully execute and uphold the law as it exists.”

“After meeting with Mr. Barr and thoughtfully considering his nomination, I believe Mr. Barr meets this criteria,” her statement said.

Only one Republican, Kentucky Sen. Rand Paul, opposed Barr in the 54-45 vote while Democrats Sinema, Joe Manchin of West Virginia and Doug Jones of Alabama supported his confirmation. Sen. Richard Burr, R-North Carolina, did not vote.

Barr came in for sharp questioning from Democrats during his Senate Judiciary Committee hearing over concerns that he might protect the White House against Special Counsel Robert Mueller’s investigation of possible Russian meddling in the 2016 election.

Many were like Sen. Dianne Feinstein, D-California, who questioned Barr on a 2018 memo he wrote that was highly critical of the Mueller investigation. She said the next attorney general must “be willing to resist political pressure and be committed to protecting this investigation.” 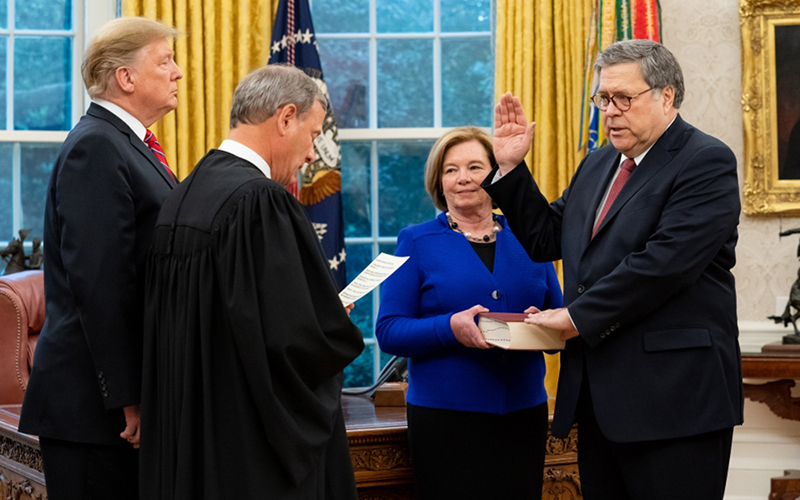 When asked if he would release the findings of the Mueller probe, Barr testified that “under the current rules, that report is supposed to be confidential … (as) in any other criminal case.”

“The attorney general, as I understand the rules, would report to Congress about the conclusion of the investigation,” he said in testimony to the committee on Jan. 15. “And I believe there may be discretion there about what the attorney general can put in that report.”

That did little to satisfy advocates like People for the American Way, which said Barr has “declined to give concrete assurances” about the fate of the investigation.

“With Barr in place, it is also absolutely critical that Congress does everything that it can to protect the Mueller investigation and to ensure that the findings are shared with the public,” said a statement from Marge Baker, the group’s vice president.

Sinema’s predecessor, former Arizona Republican Sen. Jeff Flake, unsuccessfully pushed a resolution last fall to protect the Mueller probe from interference. But that measure never got a vote, even though Flake joined Democrats to block the confirmation of all judicial nominees in an attempt to force a vote.

But partisanship is no reason to oppose a nomination like Barr’s, he said.

“For crying out loud, who do they expect Trump to nominate?” Rose said. “She succeeded Senator Flake, and he took a similar approach.”

“You could see more votes like this,” Noble said. “However she will be a wild card frankly when it comes to certain issues.”

Even though Sinema will not face re-election for another five years, Rose said. “it’s never too early to start defining yourself on your own terms.”