The Metropolitan Water District of Southern California, which has already signed a drought contingency plan, started to withdraw its allocation of water from Lake Mead in January, and is storing the water in Southern California reservoirs. Hoover Dam, as seen from the Mike O’Callaghan-Pat Tillman Memorial Bridge, forms Lake Mead, the largest reservoir in the nation. (Photo by Jordan Evans/Cronkite News)

SANTA MONICA, Calif. – Arizona and California aren’t done with finalizing a plan that would establish how states in the Colorado River Basin will ensure water for millions of people in the Southwest, Bureau of Reclamation Commissioner Brenda Burman said Friday.

Despite Arizona lawmakers meeting Burman’s deadline to sign off on a plan to keep Lake Mead’s water levels from hitting critically low levels, agreements with Native American tribes and other water users still need to be signed.

The legislation Arizona Gov. Doug Ducey signed authorizes the Arizona Department of Water Resources to execute the relevant interstate DCP agreements, Burman said, adding, “Arizona is unique in the need for state legislative action to approve the DCPs, and this important step may indicate that finalization of the DCPs is imminent.”

Even so, Arizona and California need to complete “necessary work,” Burman said in a conference call Friday with reporters.

One challenge comes from the Imperial Irrigation District, a water utility that serves the Imperial Valley in southeastern California. It hasn’t signed California’s plan because it wants $200 million to restore the vanishing Salton Sea, the state’s largest lake.

The Interior Department has requested the governors of the seven Colorado River Basin states to submit recommendations for steps the agency should take to handle severe and prolonged drought. Arizona, California and Nevada still are working on a drought plan for the Lower Basin; Colorado, Wyoming, Utah and New Mexico reached an Upper Basin agreement in December. The Interior Department will intervene if states can’t agree to a plan by March 4.

Burman acknowledged the Jan. 31 deadline she set in mid-December was aggressive, but said, “Unfortunately … the DCP in the Lower Basin is still not complete. Like I told the seven basin states in December, close isn’t done.” 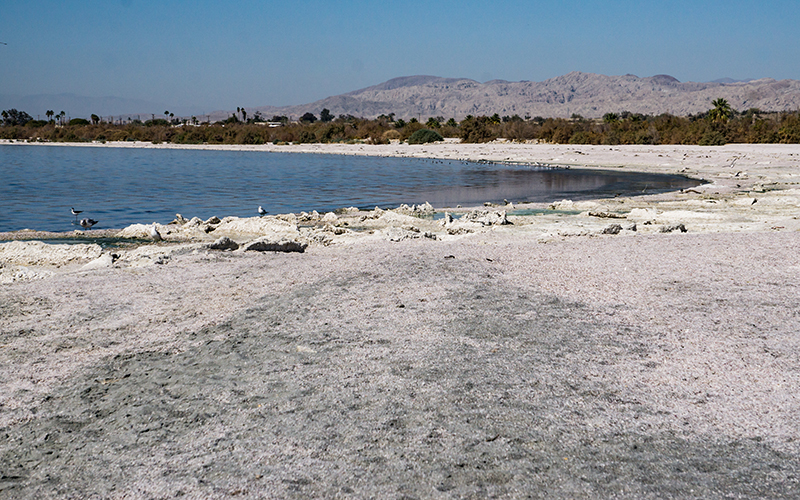 The shallow, briny Salton Sea, which is California’s largest lake, has high levels of pollution. It is a major recreation area and a key stop for migrating birds.(Photo by LindaDee2006/Flickr)

Why the Salton Sea is a sticking point

The Salton Sea, which spans 8,360 square miles in the low desert of southeastern California and northern Mexico, formed in 1905 when the rampaging Colorado River flooded and broke through an irrigation canal. For 18 months, the Salton Basin filled with river water to create the lake. Since then, the lake has been sustained primarily by agricultural runoff.

More than a century later, it’s drying up. According to the Desert Sun, the briny lake is becoming a toxic dust bowl, causing human health problems. The evaporation and exposed toxins also pose a threat to sport fishing, migratory wildlife and the Salton Sea State Recreation Area.

Robert Schettler, a representative of the Imperial Irrigation District, said the district is invested in the Lower Basin drought contingency plan and isn’t trying to stop it.

“We’re partners, (with California) and we’re trying to help, but people need to see how important the Salton Sea is,” Schettler said. “Conservation is great, but it’s having a negative impact on the sea.”

Farmers are using less water, which means less runoff flowing into the lake, he explained. Schettler said pollution and an increase in dust as the shoreline recedes is a major health concern in the region and needs to be addressed.

California approved a project to build wetlands and to control dust, but the state estimates the cost would be more than $400 million. The state needs an additional $200 million, which it wants in exchange for agreeing to the DCP.

In an email, Henry Martinez, Imperial’s general manager, said the district “will continue to work diligently to reach agreement on outstanding DCP issues.”

Why California is taking water from Lake Mead

As Arizona deliberated over its drought contingency plan, the Metropolitan Water District of Southern California already had begun withdrawing about 250,000 acre-feet of Lake Mead water for storage in California reservoirs. The utility, which is entitled to the water under current agreements, had limited the amount it had taken from Mead in the past two years, and it was able to store a record amount of water in 2017, a very wet year.

The decision by Metropolitan to withdraw water from Mead was a pressure tactic and defensive measure. Nineteen million people in Los Angeles, Orange, Riverside, San Bernardino, San Diego and Ventura counties depend on water from Metropolitan, which has stated the water would be returned if the drought contingency plan isn’t passed.

California encourages residents to conserve water through policy, outreach and promoting technology that uses less water. Despite steady population growth in Southern California, Metropolitan’s peak demand for water was in 1990.

“It’s a remarkable story of basically 25 years of concentrated investment in drawing down demand,” Jeffrey Kightlinger, Metropolitan’s general manager since 2006, said in a Metropolitan podcast. “All the devices in your house, getting people to transform the landscapes in their gardens have really turned Southern California into good stewards of water and driven down our demand to the point that we can balance with a lot less imported water.”

Despite the strides to secure California’s future water supplies, Kightlinger believes more needs to be done.

“An emergency is coming,” he said. “We already take more (from the Colorado River) than what’s put in. We (Californians) don’t have the luxury of waiting.”

Kightlinger said storing water for dry years and reducing demand are the best ways to address the dwindling water supply in the Colorado River.

Lake Mead, south of Las Vegas, is the largest reservoir on the Colorado, followed by Lake Powell on the Arizona-Utah line. Utah, Colorado Wyoming and New Mexico depend on water from Powell. Arizona, Nevada and California draw water from Mead.

As of Feb. 1, Lake Mead’s water level stood at 1,085 feet above sea level, according to USLakes.info, 143 feet below full pool. If it drops below 1,075 feet above sea level – which could occur next year – the Bureau of Reclamation will declare an official shortage and mandate water cutoffs. At 1,050 feet, stricter cutoffs would be imposed.

The Bureau of Reclamation projects that Lake Mead’s water will drop to a critical level by 2020, regardless of Metropolitan’s withdrawal. Scientists say the dwindling water levels are a result of nearly 20 years of drought, growing populations in the Southwest, increased use by farmers growing year-round crops and climate change.

In the worse-case scenario, Lake Mead would be declared a “dead pool” at 895 feet above sea level. Hoover Dam, which draws water from Mead to provide power to more than 8 million people, would stop generating electricity, and Lower Basin states would be cut off from water supplies.

Water users in Mohave, La Paz and Yuma counties all rely on the Colorado as their primary water source, according to the Arizona Department of Water Resources, and the Central Arizona Project provides on average 1.5 million-acre feet of Colorado River water to Maricopa, Pinal and Pima counties annually.