Marchers at Eastlake Park carried signs as they waited for a march to celebrate Martin Luther King Jr. on the MLK holiday. (Photo by Kelsey Mo/Cronkite News)

PHOENIX – Thousands of people, from families pulling children in wagons to elderly women pushing walkers, celebrated community, connection and Martin Luther King Jr. in a march through the streets of downtown Phoenix on the MLK holiday.

As a single drum sounded in the back of the crowd, a stream of people chatted as they strolled for about two miles, starting near Eastlake Park at Jefferson and 16th streets, winding through downtown Phoenix and ending at Margaret T. Hance Park in central Phoenix. 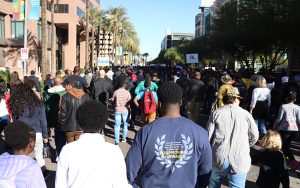 Along the way, a refugee, a family of four, an optimist and a protester against police violence marked the journey.

Ejeck Delphine, 38, who said she fled violence in Cameroon, Africa to come to Arizona nine months ago, said Monday was her first year in the annual MLK march. Organizers said the march has been happening for more than three decades. She was excited to celebrate King, who fought for civil rights for African Americans and a belief all people, regardless of race, creed or color, shared a responsibility to create a more equal world. Marveling at the crowd of black, white, Latinos and Asian-American people at the march, she recounted her time at the Eloy Detention Center as a refugee.

“The church people were coming to the detention encouraging me. They’re white. Encouraging me, a black. I was so impressed,” she said.

While the marchers made their way along Washington Street, onlookers waved at them from apartment balconies.

As the crowd headed along downtown on 5th Street, Albert Summons walked with his three young daughters. As one of them perched on his shoulder, he spoke of talks he has with his family about the struggles and violence involved in King’s battle for civil rights.

“I don’t hide anything from my kids,” he said. “I try to expose them so they are just absolutely aware and don’t do things simply for the purposes of tradition.”

Another marcher, Nekeya Esteen, enjoyed a shirt that read “no walls between friends.”

“Even if there’s a bunch of craziness in the world, at least we can get together on this day and feel some kind of safety and togetherness,” Esteen said.

Although the tone of the march was serene, one woman added a different note to remind others work remains to be done.

Katt McKinney of Black Lives Matter of Arizona yelled into a megaphone about teens whom police have shot this year. McKinney said she was protesting the killing of 19-year-old Jacob Harris, who was shot by Phoenix police during an alleged armed robbery.

“We have children that are on these streets every day. They have the right to be protected too,” she said.