For the Navajo, rez golf is about community, entertainment, family, sport and health – both physical and mental. (Photo by Jake Goodrick/Cronkite News)

It was just about time for the Lowerville Stingers Golf Club’s seventh annual Rez Golf Two-Player Scramble to tee off in Low Mountain, population 700.

“Rez golf” is growing in popularity among the Navajo, but few outsiders know of it. It’s a game unto itself, an innovative sport designed to be played on rugged courses built amid rocks, medicinal plants, and grazing livestock. On the sprawling, isolated reservation, people play rez golf for reasons – community, entertainment, family, sport and health – both physical and mental.

“Can’t go to a movie theater, there’s no bars, there’s no pizza places,” Badoni said of reservation life. “The only way to deal with it is probably the bottle, that’s probably what I would be doing if golf wasn’t around.”

Badoni, 46, a tall man with a tidy goatee, is a heavy-equipment operator from nearby Piñon. For tournament play, he wore a gray T-shirt and slacks and a black baseball cap. His brother and golf partner, Llewellyn Badoni, 36, wore a bandanna around his head and a white tournament T-shirt – sporting the Lowerville Stingers logo of a bee holding a golf club – and comfortable dark sweatpants.

More players gradually arrived, parking their cars and trucks on each side of the dirt driveway leading to the gritty course. In T-shirts, shorts, sunglasses and baseball hats, they toted their mostly secondhand clubs as they registered at the home of the Ben family, who designed and built the course.

Several years ago, Marvis Ben, a Michael Jordan fan, learned the retired NBA star is an avid golfer. Ben decided to take up the game, so, he found an empty tin can at the trash dump and sank it into the dirt behind his family’s home in Low Mountain.

The family had only one golf club, so they shared, Ben recalled.

He was inspired to design the nine-hole course after visiting the rez golf course called Wagon Trail to Lonesome Pine, in nearby Steamboat.

Ben designed the Lowerville Stingers Golf Club course organically, using hazards that naturally occured in the landscape. One hole features a steep drop-off behind the green, which adds character to the design.

To emulate the texture and speed of grass greens on traditional courses, Ben put down patches of old carpeting – sand-flecked black or gray – discarded by a nearby school.

“It’s hard, hard cleaning,” Marvis Ben said on the day of the tournament. “It took like two weeks for me to clean it. Cows and the horses, they just walk on it and everything.”

The tournament players were grateful for the clean course. They jumped with their clubs onto a flatbed truck, and members of the Ben family drove them to their opening holes for the 18-hole event.

Badoni recalled growing up in a broken home and being placed as a child with a churchgoing white family in Phoenix for about two years.

“If I didn’t get into golf, I would be a bum,” Badoni said. “There’s nothing more to motivate you out here. You’re isolated from the world. Knowing that, that’s a scary feeling, you know? Because most of the people I grew up with, they’re just walking around bottling it up.”

Like many in his community, Badoni had played basketball, or “rez ball,” in his younger years. It was a way for him to be a part of the community and stay healthy while having fun. But now he has issues with his knees. Golf, which he took up 20 years ago when he was living in Las Vegas, is one of the few ways he can stay active, he said.

Lacking golf carts, it took time and energy for Badoni’s group to find each player’s ball amid the sand, rocks, sagebrush and tall grass. They took their next shots mindful of avoiding unnecessary damage to living things.

“The landscape here, it’s not just meant for us, it’s meant for the cattle and the livestock,” Badoni said. “There’s food for them all around. I mean, we’re literally stepping on it as we go from hole to hole.

“That’s rez golf,” Badoni said. “They’ve got handicaps on (traditional) golf courses; here, you’ve got handicaps all around you. You’ve got sheep! That’s the rez golf part of it. And the dirt. You’re actually playing on dirt.”

As the group neared the ninth hole, an old pickup caked with dirt bounced across the fairway. A young boy plopped down from the truck’s cab to deliver brown-bag lunches to the players.

Four hours later, all nine holes were played. Badoni’s group returned to the hole where they started, to begin a second circuit to complete the 18-hole event. A noticeable fatigue had set in. It had been a long day and they were only halfway done.

“That’s rez golf for you, right here,” said Badoni’s brother, Llewellyn, watching his ball roll past the cup before rolling back, Sisyphean style, to the spot where the putt began. 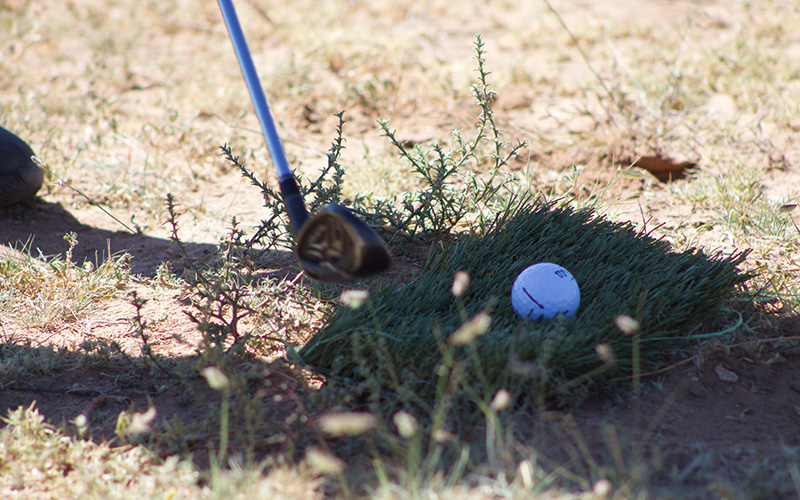 Playing rez golf means improvising, whether that translates to adding patches of carpet or plastic turf when needed. (Photo by Jake Goodrick/Cronkite News)

It is unclear how many rez golf courses there are on the Navajo Nation. The two best-known annual tournaments are held at the Lowerville Stingers Golf Club and the Wagon Trail to Lonesome Pine Golf Course.

Traditional golf and rez golf share the same objectives, clubs and, for the most part, rules.

In rez golf, each hole has a designated tee box, along with an indication of par and the hole’s total distance. However, when the ball leaves the tee, it could whiz over a horse or a sheep before landing on anthills or cow pies – challenges not found on a country club course.

Showdown on the Rez: ASU women's basketball trip rewarding for all

But it differs, too, because the land holds special meaning to the players. Rez golfers respect the land, keeping human impact on it to a minimum. Tall grass remains untouched, so animals can graze while the course is in use. Balls that roll under sagebrush, a medicinal plant respected in the Navajo culture, are moved the length of one club, without penalty, to avoid harming the plant.

“If the ball is interfering with the sagebrush or its interfering with your backswing you cannot start stomping the sage brush. Sagebrush stays as is,” said Donald Benally, creator of course at Wagon Trail to Lonesome Pine.

The cost of equipment is one factor that keeps people away. At Dick’s Sporting Goods, for example, new clubs sell for $150 to more than $1,200.

For the 174,000 residents of the Navajo Nation, about 38 percent of whom live below the poverty line, that’s all but out of reach.

But some rez golfers have found a way around the high cost of clubs.

On a crisp November morning, the Wagon Trail to Lonesome Pine course in Steamboat, about 24 miles from Low Mountain, was hardened by frost, but the sun shined bright enough to warm players so late in the season.

Donald Benally, a 53-year-old carpenter, stood outside the course clubhouse he built himself – a two-story structure with a wide balcony. He greeted kids leaping out of a school bus with a kind smile and a shy, one-handed wave, while keeping his other hand tucked into the camouflage vest that covered his neon green hoodie.

The students, in grades 3 through 6, had just arrived from First Mesa, a Hopi community about an hour’s drive from Steamboat, to learn about golf. They had been visiting the course twice a month as part of an initiative to help Native students develop an active, healthy lifestyle and new skills.

“We don’t have the lush green lawns to play golf on. It’s just like rez basketball, we make do with what we have to enjoy a passion,” said Francelia Tom, a teacher at First Mesa Elementary.

Kids laughed, swung clubs wildly into the gritty dirt with little regard for accuracy or touch, half-listened to the guidance of their instructors, and explored for themselves a game that could one day become a passion.

This is what Benally envisioned when his brother, Joe,and his cousin, Freddie Yazzie, dreamed up a nine hole golf course on their land about 15 years ago. For nine years, the Benally brothers have hosted an annual tournament, a model for the tournament hosted in Low Mountain.

As a child on the reservation, he recalled, there were limited opportunities growing up. 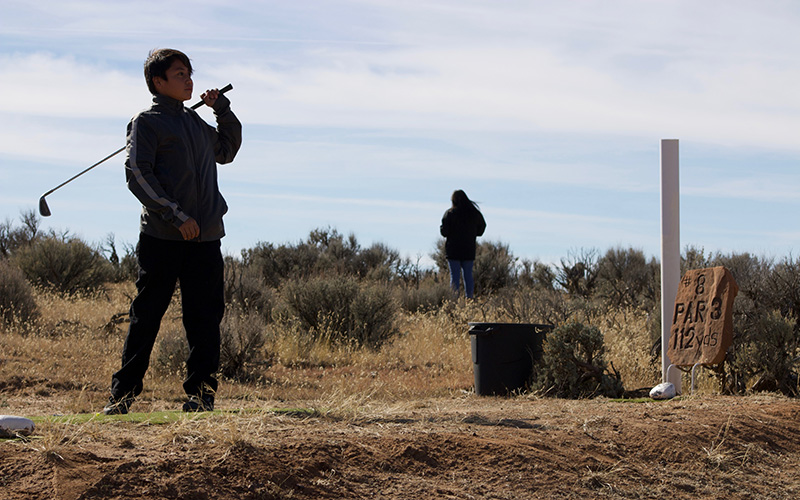 Rez golf is growing in popularity among the Navajo, but few outsiders know of it. More community elders and rez golfers are sharing the experience with children. (Photo by Jake Goodrick/Cronkite News)

“We had to struggle through life,” he said.

Rez golf can be a gateway to sports for kids living in Native American communities.

As noon approached, community elders, rez golfers and students gathered around folding tables outside the clubhouse to share a lunch of fry bread and lamb stew. Benally soaked up the scene through thin-framed glasses shaded by the brim of his camo hat.

As the huddle dispersed, it morphed into a single-file line headed toward Benally. One by one, each student put a small hand into Benally’s large hand and thanked him for letting them use the course.

As the bus drove away, Benally stared past the clubhouse and golf course, and rested his dark eyes on a distinguished pine tree alone on a distant hill.

Days like this – when children, elders, friends, family and community members come together for rez golf on a course he helped build – filled him with satisfaction. The potential for golf to impact his community, to give young people opportunities he never had growing up, had come to pass in his own backyard.

For Benally, this was what rez golf was meant to be.