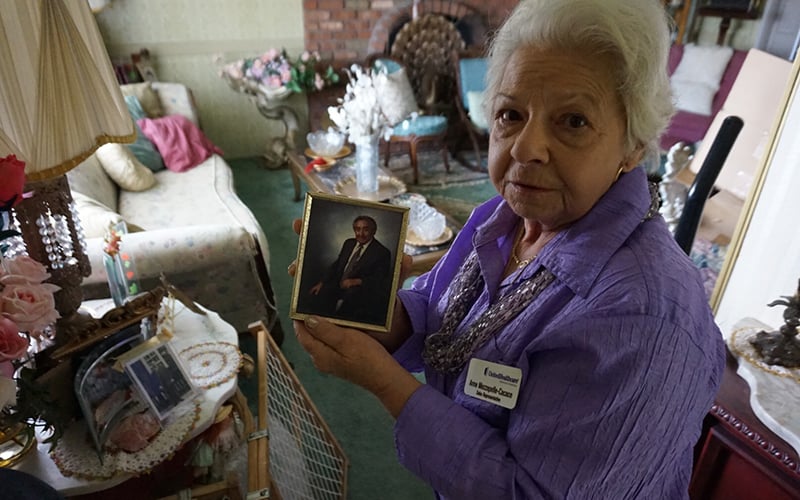 Anne Mezzapelle Cacace, 85, was one of 11,000 investors who lost a combined $580 million when the Baptist Foundation of Arizona, a registered nonprofit, filed for Chapter 11 bankruptcy in 1999. (Photo courtesy of James Pettigrew)

PHOENIX – It’s 5 a.m. and Anne Mezzapelle Cacace, 85, is getting ready for another day at work.

She sits up in faded powder-blue sheets and slides on her clear-framed prescription glasses before getting dressed, putting on a number of dainty gilded necklaces and rings that catch the light in small clusters of diamonds.

She eats alone at a kitchen table littered with yesterday’s newspapers, then grabs her keys, packs up her Ford Fusion and heads to her job as a licensed insurance broker for UnitedHealthcare, selling Medicare and Medicaid supplementary benefits.

Cacace is still working at 85 because she can’t afford to retire. In 1998, she and her husband, Joseph, invested more than $100,000 in a fund run by the Baptist Foundation of Arizona, lured by its promise of 6 percent returns and the backing from a highly respected religious institution. 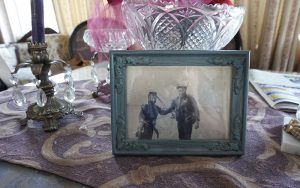 Anne Mezzapelle married Joseph Cacace when she was 16, a year to the day after they had met. They spend more than 60 years together, and she still fondly reminisces about their travels together. (Photo courtesy of James Pettigrew)

“It dampened my whole life in a way that we never recuperated from,” she said.

The Cacaces were among 11,000 investors who lost a combined $580 million when the Baptist Foundation of Arizona, or BFA, a registered nonprofit, filed for Chapter 11 bankruptcy in 1999 in what prosecutors described as a Ponzi scheme. To this day, it is considered one of the largest affinity frauds in U.S history.

The nonprofit was being run at the time by Bill Crotts, who succeeded his father as president. Originally, the invested money was put into real estate holdings in hopes that it would appreciate over time in Arizona’s booming housing market. A real estate collapse in the late 1990s thwarted those plans, but instead of telling the truth and filing for bankruptcy, Crotts chose to hide the losses and lie to investors.

“He was trying to protect his father’s legacy,” said former Assistant Arizona Attorney General Donald Conrad, the lead prosecutor on the case. “He was the prodigal son taking over the family treasury and got caught up in a real estate collapse that ruined them. I mean, they were ruined.”

The BFA fraud was a unique scheme and difficult to prove, Conrad said, because executives did not steal money and use it to buy yachts, expensive vacations or other personal pleasures. They were not moved out of malice or greed, he said – and, in a way, they seemed to care for their investors.

“Prior to the real estate crash, I do think it was legit,” Conrad said. “They had to start hiding it when the value of real estate plummeted.” Crotts, he added, “didn’t steal for the sake of putting money in his pocket. He wanted his position. He wanted the glory.”

Twenty years later, Crotts is out of prison after serving an eight-year sentence for fraud and racketeering. On his LinkedIn profile, he is listed as a business coach and management consultant for Greyhawk LLC. He could not be reached for comment.

Conrad, who was named prosecutor of the year in 2006 for his work on the BFA case, retired in 2010. He went back to work in January 2015, but he retired again a year later.

After losing their money, Anne and Joseph Cacace began organizing cruises around Europe for seniors so they could still travel, though they had to forfeit a lot of the plans they had made for retirement. The Cacaces lived off of credit cards for a while after the fraud’s unraveling, and they filed for bankruptcy when the debt caught up with them.

She received restitution, but it was nowhere near the $100,000 she and her husband had invested, she said.

That, she said, is one reason why she keeps working. And it “keeps me out of trouble,” she added.

Open enrollment months for Medicare are her bread and butter for the year. From October to December, Cacace works six, sometimes seven days a week, taking house calls whenever they come. If she can, she reserves Sundays for resting and taking care of her two older sisters.

When Joseph received an inheritance left by his parents, Anne wanted to buy annuities, a safer investment but with a lower rate of return. Joseph was swayed, however, by the Baptist couples they often lunched with at the senior center in Sun City, a retirement community west of Phoenix.

The couples had entrusted their savings to the foundation and encouraged the Cacaces to do the same. Joseph’s sisters were on board with the idea too, and Anne said she didn’t want to get in the way of their relationship.

Anne began to suspect something was wrong with the BFA when Joseph fell in love with an eggshell-blue Chevrolet Astro van he saw at a lot in Sun City. They asked to withdraw $6,000 from their investment, but the foundation wouldn’t give them the money. The people who controlled the fund’s assets refused to answer Anne’s calls for weeks, she said.

“So I went to their downtown office,” and when she got there, she was told to leave.

“I’m not leaving,” she recalled telling them. “You’ll have to pick me up and throw me out.”

After the housing market went down, the foundation parked its losing assets in a subsidiary as a way of getting them off the foundation’s books. For each of them, a director at the foundation, who also was the subsidiary’s sole shareholder, would give the asset an IOU.

Conrad believes Arthur Andersen, the foundation’s auditing company, should have been able to find out that the maneuver was just “garbage.”

In 2002, Arthur Andersen agreed to pay $217 million to settle litigation. Conrad said it was out of fear of being criminally prosecuted. It is one of the largest settlements ever paid by an accounting firm of its magnitude, once part of the “Big Five” before its downfall.

In court, Crotts and Thomas Grabinki, the foundation’s general counsel, defended their actions by saying that if the government had not gotten involved, the properties would have appreciated and the money would have found its way back to the investors’ hands. They were charged with fraud, however, because of the lies they told when they knew the foundation was upside down.

“They kept telling everybody how profitable they were and they would wave around Arthur Andersen’s unqualified annual audit of the business all to make people feel secure,” Conrad said.

Conrad said investors “let greed overtake their better sense,” although he said the foundation had something else going for it – something that tugged at an interest more powerful than money.

“The most offensive thing they did was exploit the trust that’s supposed to come from being part of a religion,” he said as he sat cross-legged on the dusty rose couch in the middle of his living room, his hair now the color of snow.

‘Pride cometh before the fall’

The Cacaces come from a long line of Italian Catholics.

Anne was born in the Bronx, New York, in 1933, the peak of the Great Depression, and was raised in a two-story, three-bedroom single-family home on Hart Street in Brooklyn, where the family grew fresh fruits and vegetables year-round in the yard.

By 9, she was writing payroll checks for her father at his factory. He made a living selling the cutlery he crafted, which Anne proudly displays in an antique chestnut cabin in a corner of her pristine living room, adorned with family heirlooms and the elaborate wooden furniture her husband carved. 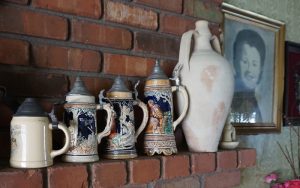 Anne Mezzapelle Cacace keeps a collection of beer steins on the brick mantle of the fireplace in her Sun City home. (Photo courtesy of James Pettigrew)

The green carpets are always freshly vacuumed. She keeps a collection of beer steins on the brick mantle and prominently displays a family Bible dating back to 1874 on an ornate pedestal.

Anne married Joseph when she was 16, a year to the day after they had met. She spent more than 60 years in his company, and she still fondly reminisces about their trips together. Joseph died three years ago of complications of Alzheimer’s disease.

Victims of the Baptist Foundation of Arizona received an undisclosed amount in restitution, paid from whatever assets were left. Many, like Cacace, still lost their life savings.

Conrad still remembers the stories he heard from people in their 80s who had to go back to work because they didn’t have enough money for food.

Although he thinks Crotts was remorseful, Conrad didn’t feel sorry for him.

“Pride cometh before the fall,” Conrad said. “He was too proud to admit that he had made grievous errors.”

CORRECTION: A previous version of this story included misinformation. The article included a misspelling of the victim’s name. Anne Mezzapelle Cacace, 85, in 1998 invested more than $100,000 in a fund run by the Baptist Foundation of Arizona. The story and captions have been corrected, but clients who used earlier versions are asked to run the correction that can be found here.