Catherine Solis, a student in an ADOT program to bring more women into the construction industry, practices building framework for a house at the Gila Community College facility in Miami. (Photo by Karisma Sandoval/Cronkite News)

MIAMI – The Arizona Department of Transportation is working with education and business leaders to change a dismal statistic – more than 90 percent of workers in the construction industry are men, according to the U.S. Department of Labor.

ADOT is working with community college leaders and contractors to integrate more women and minorities into a wide range of construction jobs, including welding, trucking, electrical work and building houses and roads.

Patricia McKinley used the skills she learned at the construction academy to launch a Phoenix business, KHAVL Transport, in 2016 with just one truck. She now has four semi-tractor trailers in the trucking company, which she co-owns with her husband.

McKinley said women need to lean toward their ambitions.

“I think we put our own fear on ourselves, not knowing we can do it,” she said. 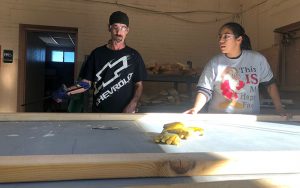 McKinley said it was intimidating at first being the only women in her class, but she wanted to see it through.

“It showed me that there was a great need for promotion, encouraging other women to get moving forward, because we can do it,” she said.

McKinley hopes to soon see more women behind the wheel of their own companies.

“A lot of the contractors are concerned that projects are increasing, opportunities are increasing in the Valley and Arizona, but the workforce does not have the skills that they need to go forth,” he said. “The academy kind of bridges the gap.”

Foster said women also lack access and face discrimination in a male-dominated industry. He said woman have expressed frustrations to him, asking, “Why do I have to interview more, or why am I being vetted more than everybody else?”

Iris Bost, who graduated from the program last year, started her own business teaching safety classes for ADOT at a Gila Community College facility in Miami.

When she first inquired about the program, she asked whether women were allowed to participate.

“As an instructor, I just try to remind my students that I’ve been in their seats, that I know how it is and that there is a way to further their education,” Bost said, “if they just give it a chance and take the time to do it.”

Gila Community College offers a hands-on experience to students participating in the program. They work at various stations, honing such skills such as machinery work, wood building and welding. 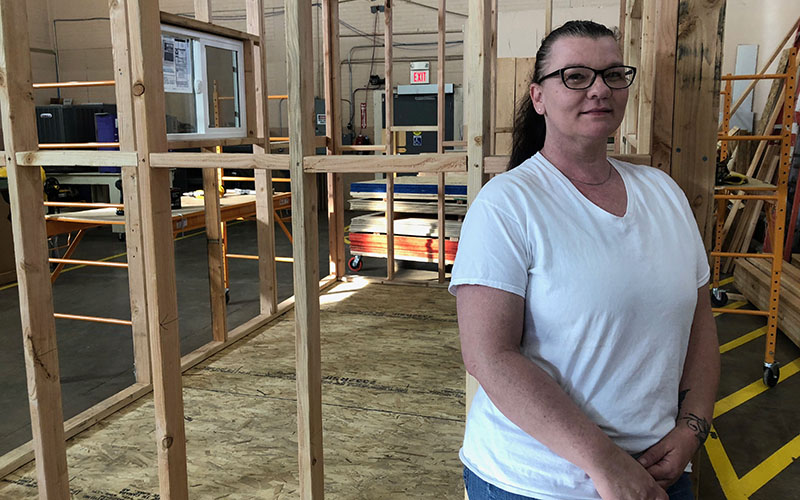 Iris Bost, now a safety instructor for ADOT, teaches classes at a Gila Community College facility in Miami. She graduated last year from ADOT’s construction academy, which aims to bring more women and minorities into the industry. (Photo by Karisma Sandoval/Cronkite News)

“I got the building trades and skills that I need to be on the job,” Bost said.

Programs are tailored to people’s schedules, preferences and how much training they need. Sessions range from a week to 16 weeks and are offered in the evenings. Each person is able to choose specific courses, such as mathematics or blueprint reading, that correlate to the job they seek.

Graduates receive certifications and all the equipment they need to be successful at their next job. That could be a hard hat or safety boots.

McKinley of KHAVL Transport said the program is a building block for more women to be involved in construction.