Pat Kinnerup, left, and Bill Haggard reminisce before boarding an Honor Flight in Phoenix. The two have been friends for seven decades. (Photo by Lillian Donahue/Cronkite News) 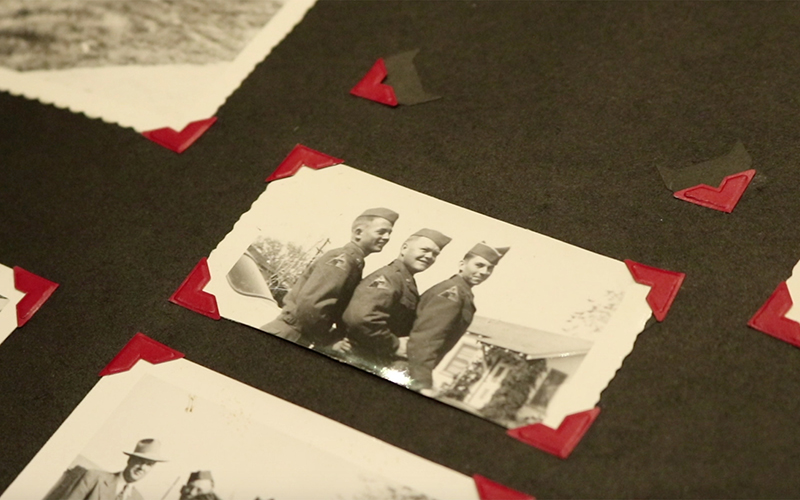 A photo shows Bill Kinnerup, left, and Pat Haggard, center, together before being seperated when they shipped out to Korea in 1951. (Photo courtesy Pat Haggard) 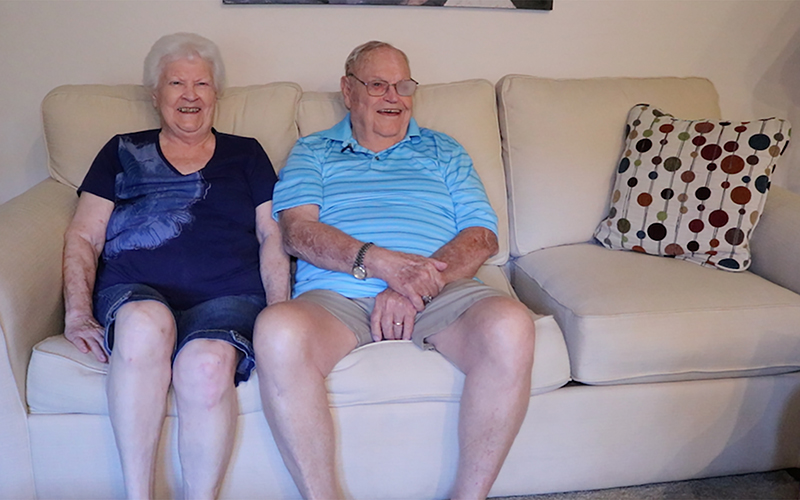 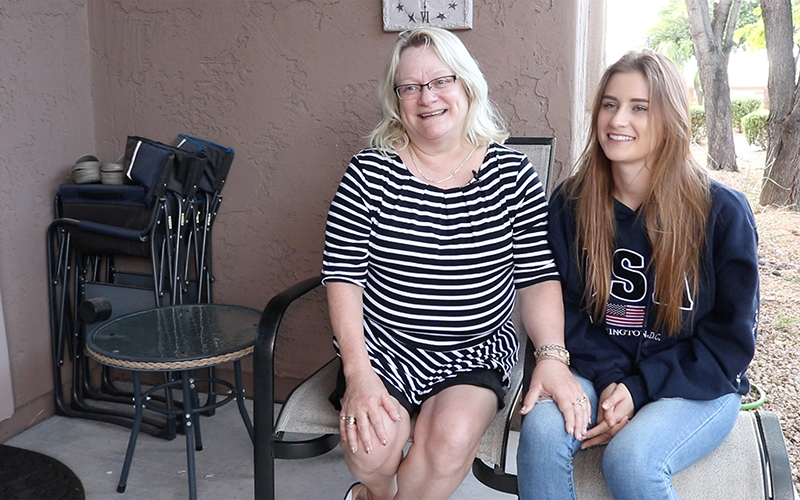 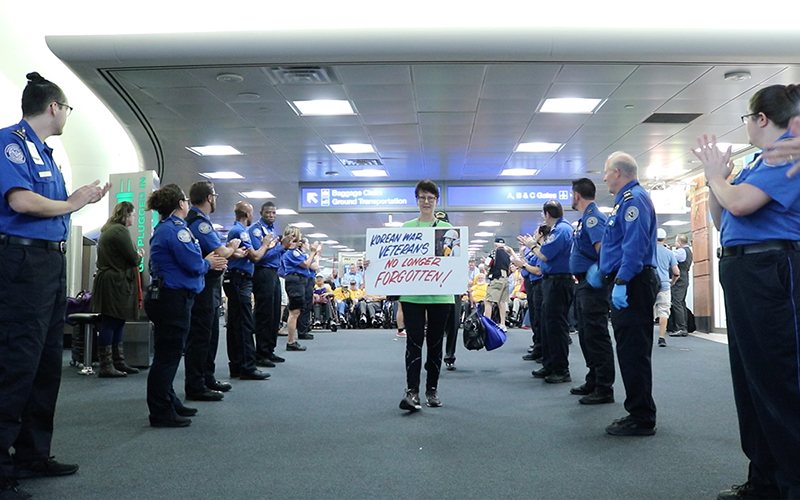 MESA – Pat Haggard spent almost his whole life in Arizona. It’s where he went to college at Arizona State University, where he met his wife, Jo, had three children and became a grandparent.

Haggard, now 89, was 21 years old when he left the state to fight in a war thousands of miles away in Korea.

“I was drafted along with four of my friends into the Army in Jan. 13, 1951,” Haggard said recently at his Mesa home. “I was toting a machine gun all through the rice paddies every night, or two or three nights a week.”

The memories, and the stories, came out in last month as Haggard prepared for the last Arizona Honor Flight of the year, when he joined four dozen other veterans and their guardians on a trip to Washington to honor their service in a once-forgotten war.

“This was the first time I’ve thought of Korea in 15 years,” Haggard said as he paged through the scrapbooks and photo albums with family members.

It’s taken him decades to finally share with loved ones who never even knew he carried the weight of a machine gun – much less a war – all these years.

Like the story seared into Haggard’s memory. One night, his platoon was bogged down while pushing up the 38th Parallel. Haggard, who took over the machine gun when the gunner was shot, was the last to leave the fight alive.

One reason Haggard took the honor flight to Washington, to see the Korean War Veterans Memorial and others, was to make sure his story and those with stories like his aren’t forgotten.

Robyn Rohla, medical director and trip lead for the Oct. 23 Honor Flight that Haggard was on, said the trip affects veterans and volunteers alike.

“This resets my whole life and puts into perspective what’s important out there,” Rohla said.

Haggard was flying with one of his closest friends, Bill Kinnerup. The two graduated together from Phoenix Union High School in 1947 and they were drafted together. And last month, they took the honor flight together.

“It’s just like old home week to be going with Pat,” Kinnerup said. “Like something I never dreamed could happen.”

Haggard said they were particularly happy for the chance to take the trip with friends. “You know this is going to be much, much better and happier and more to tell,” Haggard said.

Haggard’s daughter and granddaughter have both seen the Korean War Veterans Memorial and hope the experience can help him, and veterans like him, open up about their service.

“I know it’s hard for him to talk about it from what I saw, but I think it’s really cool to know that in my family I have a hero that I can look up to,” said Haggard’s granddaughter, Jackie Traughber. 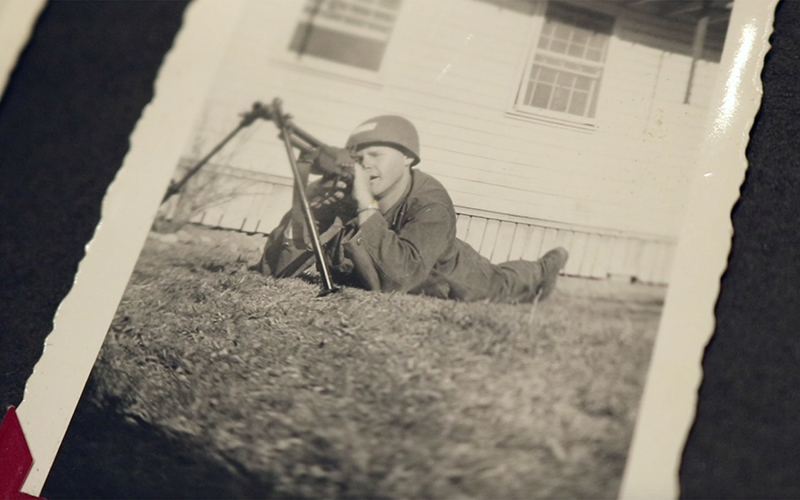 A young Pat Haggard looks through a gun scope during his time in the Army in the early 1950s, when he served in the Korean War. (Photo courtesy Pat Haggard)

Once in Washington, the stories start flowing with the memories. Like Donald Bols, who served on a Navy minesweeper and was searching for his ship in the National Museum of the U.S. Navy in Washington’s Navy Yard.

“That’s the same ship I was in Korea with, isn’t that something?” Bols said while pointing at a small, 50-crew ship.

And Doyle Porter, a former Air Force pilot who finds his plane etched into stone of a wall at the Korean War memorial.

“We could outshoot them, outfly them even in the F-51s,” Porter said while pointing out a common bomber used in the war.

It’s Haggard and Kinnerup’s first time seeing the Korean War Veterans Memorial – a moment frozen in time that lets them look back at themselves almost 70 years ago.

“This was every night,” Haggard said, looking at the statues of soldiers on patrol that are a focus of the memorial. “These guys depict the raining weather and you wore your poncho. It’s emotional, but it’s something that we dealt with at the time and proud of it.”

Haggard’s daughter, Patty Traughber, notes that what was long known as the Korean conflict, “Now they say it’s a war, but for years they didn’t even claim it as a war.”

“He’s always been my hero, but he is just a hero to (have) gone and do the things he did,” she said of her father.

Those at Honor Flight Arizona hope to continue the tradition and start bringing Vietnam Veterans along as early as next year.

“I can’t see it ever ending,” said Dale Blomker, Honor Flight Arizona treasurer and trip lead. “With all the facets of the veterans that we have, World War II, Korea, Vietnam and I’m sure we’ll go beyond that when the time comes.”

The Korean War is not lost on Haggard, Kinnerup or their companions. But as they pass away, they hope their legacy is engrained into America’s memory.

“Most of us can’t forget it. I just hope that history doesn’t leave it as the forgotten war and remember the job that was done then,” Haggard said.