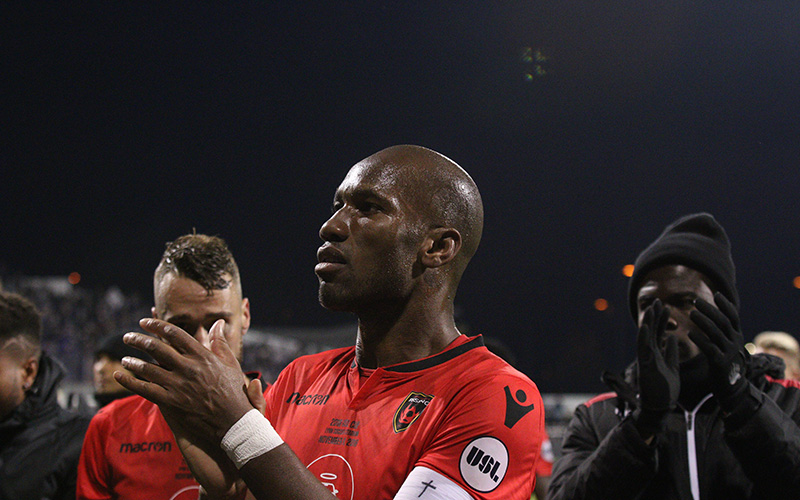 After their loss, Didier Drogba led Rising players as they congratulated their rivals, thanked their fans and stayed on the field while Louisville City received and raised the USL Cup. (Photo by Ricardo Ávila/Cronkite News)

LOUISVILLE, Ky. – The confetti shot into the air as the newly crowned 2018 United Soccer League Champions lifted the cup. After a playoff run that included hefty wins at home, the team held the league’s top trophy surrounded by fans and media. One of its team leaders had scored the game winner.

Phoenix Rising FC hoped to be the protagonists of that story, with Didier Drogba as their main star.

Only in real life, the confetti was purple, the fans were for Louisville City FC and Drogba stood on the sideline watching the celebration.

After the final whistle, Drogba led Rising players in congratulating their rivals, thanked their fans and stayed on the field while Louisville City received and raised the USL Cup.

“The fire that’s burning inside me right now to get to work and start preparing for next year is something that I know is going to help me,” Rising coach Rick Schantz said. “I’ll always be able to remember watching them raise that cup. It’s a moment I’ll never forget. It’s burned in my memory.”

In 2018, the Rising achieved a record-high of regular season points, goals scored and wins, reaching the USL Cup final for the first time in club history.

“I couldn’t be more proud of our players,” Schantz said.

On a cold evening before a crowd of 7,025 at Lynn Stadium, Louisville City become the first USL club to win two consecutive championships.

Akin to the strategy in other playoff games this year, the Rising allowed Louisville City to exert more pressure on them, aiming to strike back via a counterattack.

The Rising were playing with fire. And they got burned.

Even though the Rising had a chance to take the lead in the first half with a deflected Jason Johnson shot, the team failed to produce dangerous chances on Louisville City’s goal during the rest of the game.

Even Drogba, who had scored in every playoff game in Rising history, seemed to be a bit off. He had six shots, only one of them on target. He was in charge of taking free kicks, and again, only one was on target. The rest? Over the opposing goal.

Even though this game was supposed to be Drogba’s last-ever game as a professional soccer player, his Wednesday press conference casted a shadow of doubt as to when he would retire. 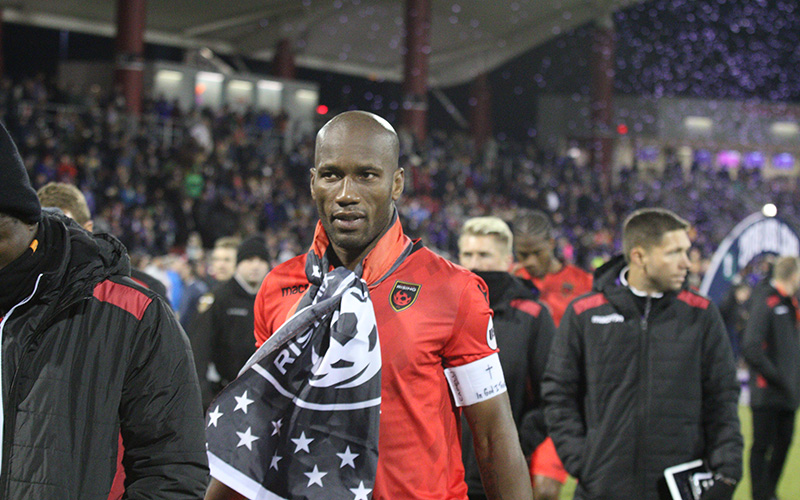 Phoenix Rising FC standout Didier Drogba has hinted at retirement but not completely confirmed it. (Photo by Ricardo Ávila/Cronkite News)

When asked about his last-ever game, Drogba said, “Maybe not,” and the press conference room chuckled. When he followed up, he said, “Let’s see how it goes,” as Schantz smiled. Drogba said he received calls of interest after his performance against Orange County Soccer Club in the Western Conference Final a week ago.

Schantz didn’t confirm whether Drogba would retire or play another season.

“That’ll be a separate press conference for him. … We haven’t had that much of a discussion.”

Schantz apologized to Drogba for not giving him the cup, to which Drogba replied, “Well done coach, keep your head up.”

Goalkeeper Carl Woszczynski said Drogba’s talent on the field speaks for itself.

“He treats everybody like an equal, with respect. That says a lot from the guys he played with. One of the most valuable things I’ll take from him is no matter the level you can still be humble and treat everybody with respect.”.

The only change to the Rising’s lineup was a major one. Chris Cortez, the club’s highest goalscorer this season with 19, was left out of the match after suffering a hamstring injury against Orange County last week.

He was replaced by Kevaughn Frater. Schantz said they knew pretty early Cortez wasn’t going to play and that when he called on Frater, Frater smiled and said, “I got you, coach.”

“I thought you had two really fantastic teams,” Schantz said. “(And) 1-0 was the way the result was going to go either way.”

Woszczynski was impressed by Louisville City.

Schantz said the team experienced peaks and valleys but that the group was resilient.

“Something that I don’t know if I’ll ever be able to replicate it. I’ll do my best,” he said. “I’d love to play that game again.”

Woszczynski was grateful for the strong support of Rising fans.

“These fans expect a lot from us and we want to give back to them.”

About 1,000 fans traveled to the Orange County game last week and a smaller number made their way to Louisville for the final.

The team also held a viewing party at the Phoenix Rising Soccer Complex in Scottsdale Thursday night. Fans were able to access the stadium and sit on the field, watching the game on giant screens.

Those fans saw their team, which was eliminated in the first round of the playoffs a year ago, make it all the way to the final.

The Rising were close to bringing a trophy back to Arizona. The season that also saw the team set a home record attendance average of 7,707, ended in heartbreak.

Afterward, as Drogba left the field, with purple confetti falling in the background, he stopped. He touched the grass for what could be one last time, before disappearing into the locker room.