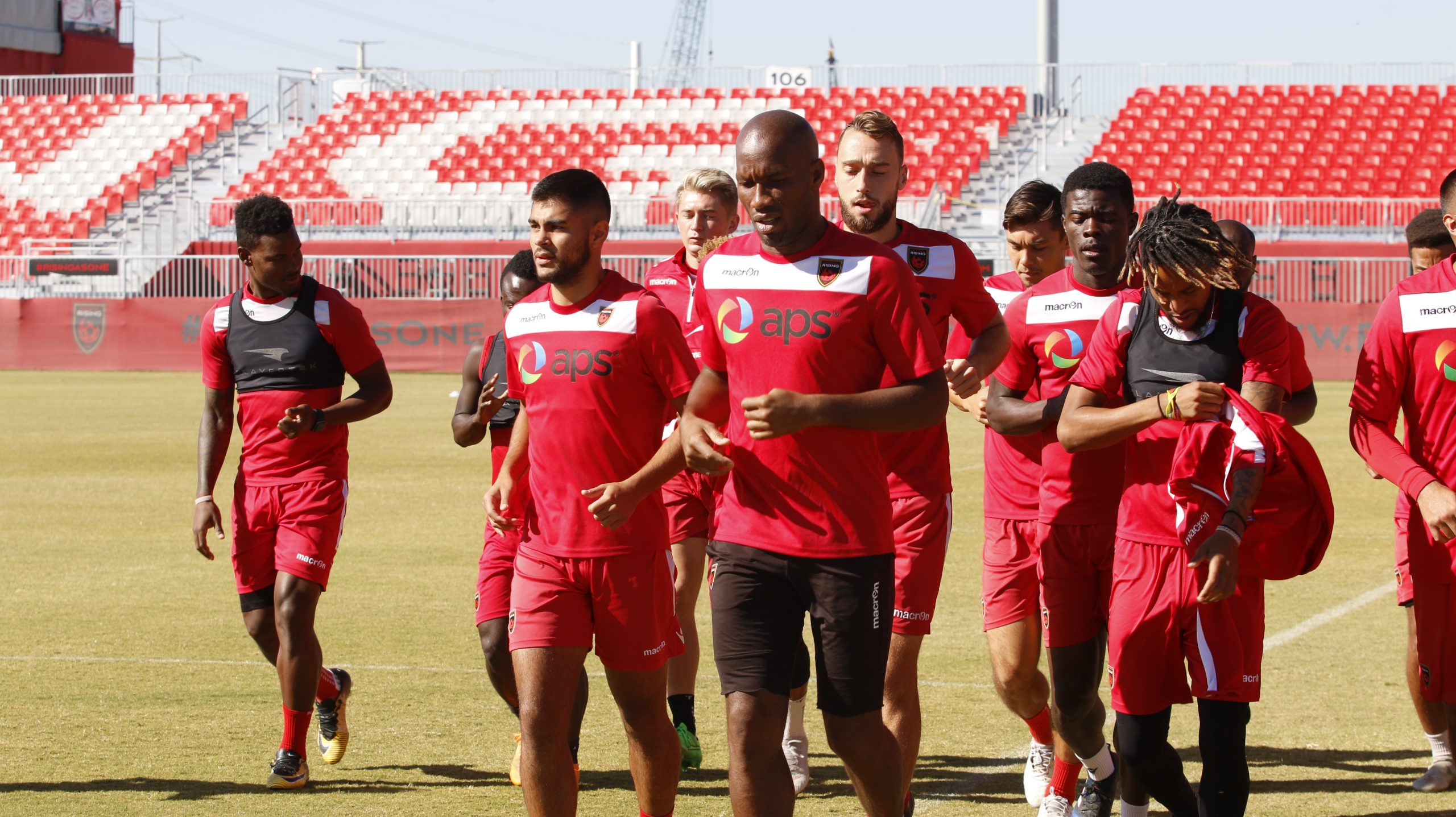 SCOTTSDALE – Phoenix Rising is on the verge of winning the United Soccer League Cup and giving Didier Drogba a fairytale farewell as a professional.

After an intense and hard-fought, 2-1, win over Orange County Soccer Club, the only team between the Rising and the USL Cup championship in only the club’s second year of existence is Louisville City FC.

However, amid the excitement of the Rising’s championship chase, the team and its followers will have an eye on an election in San Diego, Calif., that threatens to dampen the mood around the Rising’s playoff run.

A pair of measures on the ballot in San Diego could decide whether Major Soccer League awards a franchise to San Diego.

San Diego voters will consider two measures that could decide the future of MLS soccer in the city. They will decide between two measures Tuesday.

Measure E, known as SoccerCity, would allow for the development of the land that served as the practice facility of the NFL’s Chargers, who moved to Los Angeles. It would include a soccer stadium, homes and hotel rooms.

But voters also will have the option of voting for Measure G, known as SDSU West, which would allow sale of the land to San Diego State University to expand its campus and build a new football stadium.

If both measures get 50-percent of the vote, the one with the highest vote total will get the land. If voters don’t give either measure 50-percent approval, neither plan will be enacted. 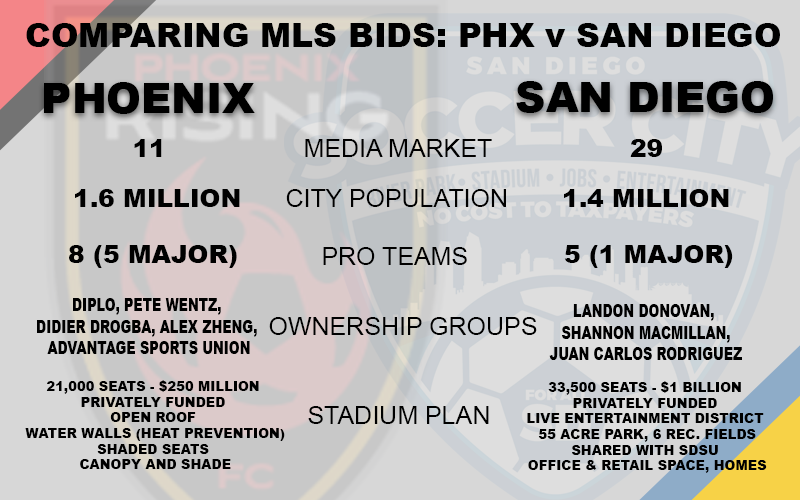 This is what the cities of Phoenix and San Diego have to offer if either was to be chosen to become an MLS franchise. (Graphic by Isabella Sisneros/Cronkite News)

As that voting unfolds, the Rising will prepare to travel to Louisville, Kentucky to face Eastern Conference champion Louisville City at Lynn Stadium on Thursday at 6 p.m.

“We know one way or another, Friday we’re coming home and we plan on coming home with a trophy,” Rising coach Rick Schantz said.

It would deliver a strong message to the MLS about the Phoenix club.

When the referee blew the whistle to end the game against Orange County that propelled the Rising into the final, Schantz raised his hands in the air and turned around to face the team’s ownership group that was present at the game.

“I told them that this is the team that they built and they should be proud,” Schantz said.

The matchup for the Cup Final looks even on paper, although statistics-based prediction site fivethirtyeight.com gives Phoenix only a 30-percent chance of winning. The Rising have an away record of 9-5-3 while Louisville has a home record of 9-3-5.

The match might come down to playoff experience, or a lack thereof.

“Well, we have a Champions League Winner on our team,” Rising midfielder Collin Fernandez said. “The experience we have is special as well. For them it’s the experience of winning the USL Cup. We have the experience of players that have played at a high level.”

That Champions League winner is Drogba, who has scored in every game in Rising playoff history. He secured the game-winner against Orange County last week and looks as energized as ever.

In the last 15 minutes of the Western Conference Final, Drogba was running around like a 25-year old, Schantz said. A man who is all smiles in training and after the games, Drogba’s storied career includes winning a UEFA Champions League title, four Premier League and a Turkish league title.

Louisville City is the defending USL Champion after beating Swope Park Rangers 1-0 with an 88-minute Cameron Lancaster goal in 2017.

Cortez scored the first goal of the Western Conference Final game against Orange County in only 66 seconds, making that the quickest goal in USL Cup playoff history.

Cortez was subbed out of the game in the 62nd minute because of a hamstring injury. Schantz said Cortez will travel with the team and will be part of the 18-player roster, and that his inclusion in the starting 11 will be a game-time decision.

Fernandez said the players are excited and the USL Cup was the team’s vision from the start of the season.

“You’re fighting for your life in those four games. To be in the final games, it’s special. We can’t wait,” Fernandez said.

At the end of the Orange County game, Rising fans rushed the field, celebrating with the players. Hugs, tears, and chanting enveloped Championship Soccer Stadium.

“It’s crazy,” Fernandez said. “I kind of tried to run the other way, almost, because I was a little scared, but it was awesome.”

Fernandez hopes to win the title for the team’s fans.

“It would be amazing for them, for the city, for us. For everyone in Arizona,” he said.

Rising defender Devante Dubose said winning the cup is more than just a game, and that he feels the state’s support.

“It’s a sense of pride. And we feel that,” said Dubose, who had high praise of the Rising fans.

“They’ve been the realest. They’ve been to more games than I have. It’s difficult to stay in games if you don’t have that 12th man. We need them as much as they need us.”

“That’s why we want to work hard. It means so much to us,” he said.

A few days out from the most important game in the club’s history, Schantz said the players were happy and excited, and that it was the coaching staff’s job to calm the mood a little bit and analyze Louisville City.

“If you want to win a Cup, you want to go through the best,” Schantz said. “The lights will be shining bright. We just have to show up.”

Schantz said the Rising is showing the MLS’s needs that the organization and the Valley are ready for an MLS franchise.

“All the boxes are checked off,” he said. “My goal as a coach is someday to be walking out into a brand new MLS stadium with 25,000 season ticket holders here.”

The competition is stiff. As many as 10 other cities are likely in the running to land a franchise, including Phoenix and San Diego.

MLS has not officially declared the teams taking spots No. 27 and 28, but in recent weeks there have been strong links between the owners of the Cleveland Browns and the Columbus Crew.

The Crew were originally moving to Austin and being rebranded as Austin FC. If they remain in Columbus, MLS said they are still interested in bringing MLS soccer to Austin. Which would grant Austin spot No. 27.

The vote in San Diego could give SoccerCity the inside track and throw a shadow over the Rising’s playoff thrust ahead of the USL Cup final.

In an interview with KUSI News in San Diego, Univision’s Rodriguez said he is “fully confident” that if Measure E passes, San Diego is getting an MLS team and added that his team would have shovels in the ground by 2019.

The Rising MLS bid centers around a proposed 21,000-seat, $250-million soccer-specific stadium that will include heat-mitigation features. The San Diego MLS bid includes a 35,000-seat, $1-billion stadium project. Both stadiums are to be privately funded.

San Diego doesn’t have a USL team, but Rodriguez said the proximity to the U.S.-Mexico border and the large latino community near San Diego bode well for SoccerCity’s bid.

“There’s a huge opportunity there that we should not miss in San Diego,” Rodriguez said. “San Diego loves soccer.”

The Rising issued a statement last week that said the team would not comment on bids from other cities and is focusing instead on the playoffs.

And focus they will, according to Schantz.

“There’s only two teams in the country this week training at this level, and we’re one of them,” Schantz said. “We know it ends on Thursday and we might as well give everything we have.”