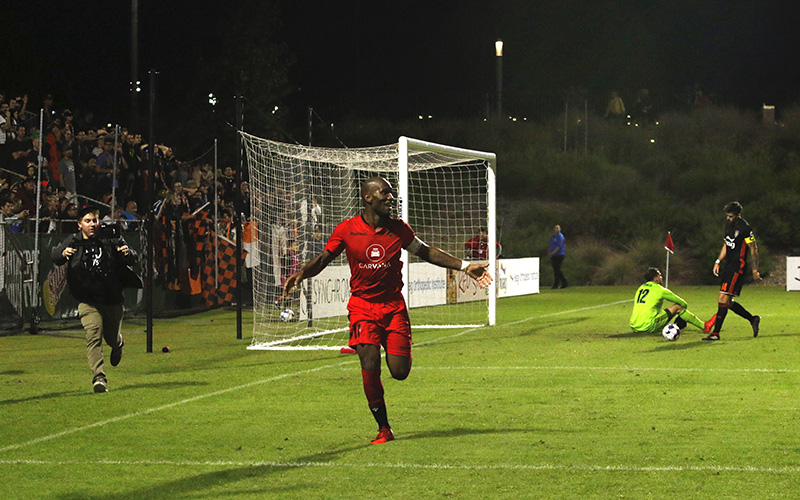 Didier Drogba celebrates his goal as he runs toward the corner flag Saturday night in Phoenix Rising FC’s playoff game. Drogba has scored in every USL playoff game in Rising history. (Photo by Ricardo Ávila/Cronkite News)

A Chris Cortez first-half goal and one by Didier Drogba in the second half gave the Rising the USL Western Conference championship as they eliminated Orange County Soccer Club 2-1 Saturday night.

With the help of numerous fans traveling from Arizona, the Rising and Drogba knocked out the USL Western Conference regular season champions in their own stadium.

Afterward, Rising fans, players and co-owners all jumped, sang and celebrated as one. The players took turns lifting the Western Championship trophy. And in the middle of it all was a smiling and singing Drogba.

A man who has won almost every trophy at club level has a chance to retire from the game as a champion.

Schantz said Drogba dictated the match, dropping back to help defend after Cortez was substituted in the 62nd minute because of a hamstring injury.

“The lights are shining the brightest, and the stars come out,” Schantz said.

Drogba has scored in every USL playoff game he has played in, including last year’s contest against the Swope Park Rangers.

“We get emails, calls and texts every day from players around the world that just want to play with him,” Schantz said.

Schantz said he talked to former Rising coach Patrice Carteron over the phone and thanked him for the opportunity and the support. Carteron is the coach of Egyptian giant Al-Ahly.

“I followed in Patrice’s footsteps and said to our players: Help win Didier the cup and they will be legends. They will be the last guys to play with Didier Drogba.”

Seven buses of Rising fans came in from Arizona, in addition to some fans who drove to Southern California on their own.

The Rising don’t quit when they have the kind of support they had at the game, Schantz said.

Goalkeeper Carl Woszczynski agreed and said he felt like he was playing a home game. 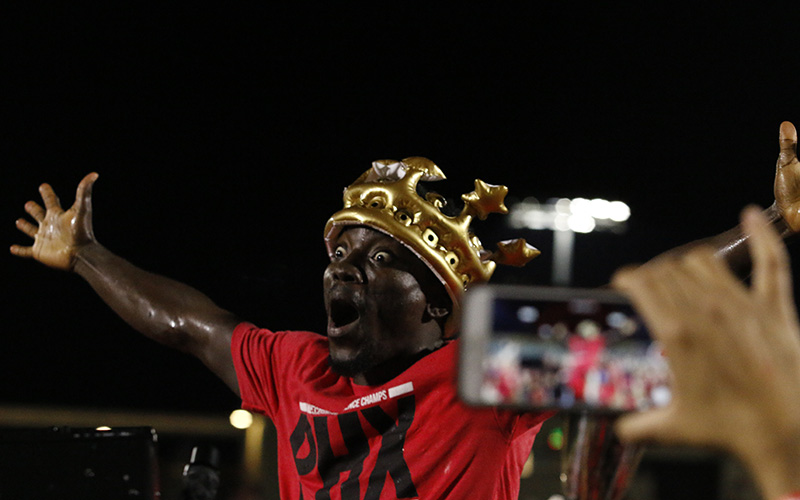 Solomon Asante celebrates as he puts on a crown a Phoenix Rising fan gave the players. The 2018 season is Asante’s first with the Rising. (Photo by Ricardo Ávila/Cronkite News)

This game was the fourth meeting of the year between the clubs. The previous three ended with a win for each team and a tie.

“We struggled a little bit in midfield in the first half, closing down some passing lanes,” Woszczynski said.

The Rising’s first goal came at just 66 seconds, courtesy of Cortez, who extended his all-time leading scorer tally to 31. It also became the fastest goal in USL playoff history.

A Kevon Lambert pass found Cortez’s left foot, sending fans into a frenzy and confetti strings onto the field.

The Rising managed to keep Orange County at bay, even though the home side held onto the ball for 70 percent of the first half.

The second 45 minutes served a clear purpose. Orange County attacked, and the Rising sat back awaiting a perfect moment to strike.

Trouble came knocking but the Rising didn’t answer the door.

“I’ve talked about it the whole season. My defense has been incredible in front of me,” Woszczynski said. “They did all the work for me.”

In the 60th minute, Cortez fell to the grass. Drogba asked him if he was OK and Cortez just shook his head, later leaving the game due to a hamstring injury.

About 10 minutes later, Drogba scored his third USL playoffs goal in as many games this season after a rebound found his feet.

An Orange County goal from Koji Hashimoto in the 82nd minute put the Rising on high alert.

And even though the referee awarded six minutes of added time, no more goals were scored.

Schantz enjoyed seeing the players celebrate the way they did.

Celebrate they did. After the final whistle, several hundred Rising fans stormed onto the field to celebrate with their idols.

Even though the situation turned contentious at times with Orange County supporters also on the field and confronting their rival fans, the scene in Irvine was memorable, reminiscent of a time when fans celebrating with players on the field was the norm, not the exception.

Next up for the Rising? Louisville City FC. The Rising will travel to Kentucky to play for the USL Cup at Lynn Stadium on the University of Louisville campus Thursday.

Louisville City’s usual stadium, Slugger Field, is home to a minor league baseball team and has been entangled in controversy because of the state of the field. Slugger Field has patches of grass, turf and baseball infield visible, complicating regular soccer play.

The championship match-up pits the best offense against one of the best defenses in the USL.

Louisville City is the highest scoring team with 82. The Rising are tied for first in clean sheets with 17.

Cortez’s possible absence could be balanced out by Cameron Lancaster’s injury.

Lancaster is the league’s top scorer with 26 but had to abandon the Eastern Conference Final early in the game due to a leg injury.

The Rising are aware the next game is the most important one this season.

“This isn’t the final, it’s a semifinal,” Woszczynski said. That’s what Schantz told them.

The Western Conference championship is Woszczynski’s first-ever trophy as a professional.

“We were joking with Didier, he’s got the cup pose down, but for some of us it’s the first chance,” he said.