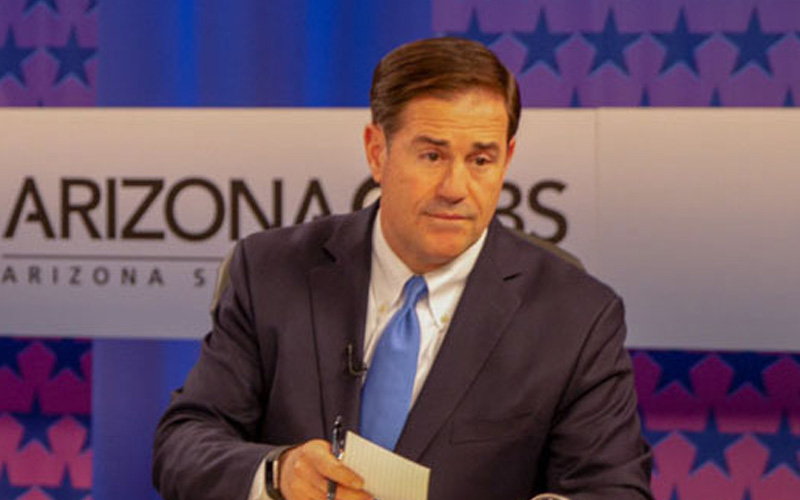 “The biggest issue in Arizona is education,” Ducey said. “We want our kids, the 1.1 million schoolchildren in our public education system to have an education of value so that they can go out into the marketplace.”

In addition to traditional K-12 education, the governor said he wants to focus on trade and technical education. “Classes that were called ‘shop’ when I was in high school – we’ve got a lot of opportunities in our economy with the skilled trades,” he said.

“We are a border state, so we want to make sure that we have a good relationship with our No. 1 trading partner, Mexico,” he said.

Although trade traffic needs to flow freely and safely across borders, “at the same time, there’s things like drug cartels, human trafficking and sex trafficking that happen at the border,” he said. “We want to focus on safe neighborhoods, safe schools and safety for the public at the border.”

Ducey, 54, referred to water as being a critical issue. And with Arizona’s population at roughly 7 million – and Maricopa County being the fastest-growing county in the country – infrastructure is also vital, he said.

“Roads and bridges, airports, the way that we move our goods and services – think of it as the backbone of our economy,” Ducey said. “When you have a growing economy, you’re going to have a lot of transport of goods and services, and that’s where infrastructure comes in.”

When it comes to child safety, Ducey explained that the state can’t let down “those (who) are the most vulnerable among us,” particularly children whose parents might have a drug addiction or are otherwise “unfit to raise their child.” He said in those cases, the government has the responsibility to provide care for the child, and the state budget should include funding for those children.

Beside serving four years as governor, Ducey touted his time as a businessman and former CEO of Cold Stone Creamery. He said he has tried to bring that business experience and those business principles to state government.

“Four years ago, our budget was broken. We had a $1.1 billion deficit in the state of Arizona, our education system was mired in lawsuits, and our economy was flat,” Ducey said. “Fast forward three-plus years later, our budget is balanced. We’ve got a record surplus in our general fund. Our economy is booming. We’re among the fastest-growing economies in the country – and we’re taking those dollars and giving a 20-percent pay increase to our teachers in K-12 education and restoring all the cuts that were made during the Great Recession.”

Ducey said his personal challenge is always about focus.

He said there are many things he’d like to improve in Arizona. “But I know from my past experience as a business leader that it’s about prioritization and what’s most important right now,” he said.

He said the challenge is figuring out “what are we going to do,” and then effectively communicating that to residents and getting buy-in from them. He said it’s important to listen to what the people want, but the government must focus on priorities first.

“Just like that first year, we came in and we had just a bunch of tough decisions to make, and there was no additional money to spend – quite the opposite. We had to tighten the belt in the state budget,” he said. “Had we not prioritized getting the budget balanced first, we would have never been able to get the (20 percent pay) raises to the teachers or restore additional assistance to K-12 education.”

The governor said that as someone who needs to stay up-to-date on current events, he most values “some of the news apps,” and that “if you construct Twitter the right way,” it’s a good way to keep up with the news.

Ducey said Democratic opponent David Garcia “would like to double income taxes in the state of Arizona, roll back a lot of the public safety that I put forward (and) increase some of the regulations.”

All of that, Ducey said, would make Arizona “a carbon copy of California.”

(In a written response to Ducey’s comments, Garcia’s spokeswoman Sarah Elliott told Cronkite News that Garcia “will not raise taxes on middle class and working families as governor.” She said Garcia would look at “smarter ways” to keep the public safe, and he would examine regulations individually.)