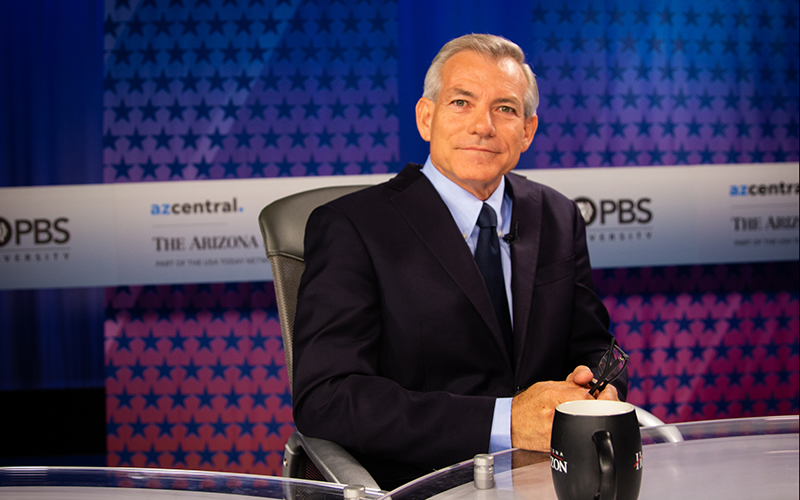 David Schweikert has represented Arizona’s 6th Congressional District since 2013, and before that he served one term as congressman from District 5. He faces Democrat Anita Malik on Nov. 6. (Photo by Anikka Abbott/Cronkite News)

Schweikert describes himself as having a “fixation on retirement security.”

He said he wants to ensure that each Arizonan can age gracefully and feel confident they will have their needs met. Schweikert wants to protect the finances and health care of retirees, and he understands the impact of changes to programs such as Social Security and Medicare.

Schweikert, who has a business degree and a master’s degree in business administration from Arizona State University, said he wants to ensure lawmakers keep promises made to seniors and Baby Boomers.

Schweikert, 56, said he wants to undo the “malaise of the last decade.”

He views border security as being a top campaign issue. Schweikert said he agrees with the Trump administration’s proposal of a merit-based immigration system. He said such a system would promote American vitality and trade.

Economic growth is a huge concern as well. Schweikert said he would like to create a much more flexible tax code that will allow the U.S. to compete economically with other countries.

In addition, he would like to focus on health care and the opioid crisis.

Schweikert cited his extensive experience in government – from local to national politics.

“This is what I’m good at,” Schweikert said.

Schweikert began his political career in the Arizona House of Representatives. He served as the chairman of the State Board of Equalization from 1995 to 2003, helping oversee billions of dollars in Maricopa County.

From 2004-07, he served as chief deputy treasurer of Maricopa County. He joined Congress as representative for District 5 in 2011. After redistricting, he has represented District 6 since 2013. That district includes most of northern Phoenix, as well as Scottsdale, Paradise Valley and Cave Creek.

Schweikert said he is inherently shy and would be “more comfortable in a corner with a book” some days, but he understands that public appearances and tough conversations come with the territory of holding office. And it’s hard not to take criticism personally, he said.

Schweikert said he can’t imagine life without FaceTime. While in Washington, D.C., he connects with his 3-year-old daughter multiple times a day. If he could, he’d like to give the creator of FaceTime an enormous hug, he said.