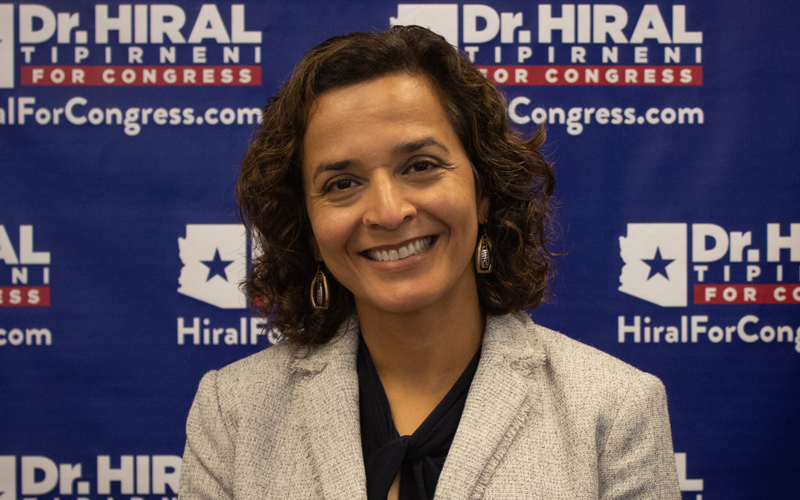 Dr. Hiral Tipirneni is running for the U.S. House of Representatives in Arizona’s 8th District. She narrowly lost a special election for the seat in April to Debbie Lasko, who’s again her opponent in this election. (Photo by Kailey Broussard/Cronkite News)

As a doctor, Tipirneni said she’s seen the struggles of families who do not have access to health care. If elected, ensuring people have affordable health care is “at the top of her list.”

Tipirneni, 51, said she would take steps toward expanding Medicare, as well as “stabilizing some of the negative steps” the Trump administration has taken, such as removing the individual mandate and removing protections for people with pre-existing conditions.

“One of our big steps forward is turning Medicare into that public option – making sure that people can buy into Medicare, letting it compete in the marketplace,” she said.

Accessible health care is connected with education and economic opportunities, Tipirneni said. She sees disparities between schools in District 8, which includes much of the north and west parts of metro Phoenix, and schools in other wealthier areas.

“You can’t really have success in one area sometimes without the other two at least being stable,” she said. “What happens is that a lot of these families, we hear, are struggling with all three of those things, and they really negatively feed into each other.”

She said she has many constituents who struggle to stay afloat and work multiple jobs to support their families.

Ultimately, she said, she would like to match the economic growth seen in the East Valley.

“There are a few steps we can take to adjust this crisis and to keep our community safer,” she said. “Most of these common safety reforms are things that Americans agree with across the board, regardless of political affiliation.”

Tipirneni, who called gun violence a public health crisis, doesn’t see anyone in the U.S. Capitol aggressively addressing the issue outside of offering up prayers for victims. She said although a definitive answer to quelling gun violence is not clear, the hesitation of leaders to broach the topic is ridiculous.

“We’re talking about lives at stake,” she said. “Families are being destroyed. Lives are being cut short. There are so many things we can do.”

Tipirneni now works as a cancer-research advocate after years of working as an emergency room physician. From her work in cancer research advocacy to her time spent in the emergency room, Tipirneni said she has nurtured a sense of empathy. She said the ability to connect and resonate with others is in short supply, which is why she’s running.

“I don’t feel like we have representation in this district in the sense of anyone really feeling that they’ve connected with the families throughout the district and said, ‘Hey, I’m fighting for you. I’m fighting on your behalf. I’m going to be your family’s champion,’” she said.

Her years of residency at the University of Michigan Medical Center, Tipirneni said, were the toughest of her life physically and mentally, as she learned how to “dig deeper and work harder.” Those lessons apply to her campaign for Congress.

“You are constantly having pressure put on you from all sides and you’re striving to do your absolute best and the learning curve is steep,” she said. “There’s a lot at stake.”

“When you know better, you do better” is Tipirneni’s mantra. She also uses the phrase to encourage people to use their gained knowledge to their benefit – and the world’s.

“It’s important to seek out what you don’t know. Once you know, let that guide you to do better,” she said.

Tipirneni uses a family calendar app to stay connected with her two daughters and son, coordinating their schedules to determine the best times for phone calls or FaceTime chats.

“Especially because I’m so busy, it makes me feel very turned in to their lives and their schedules,” she said. “I can check in very easily.”