PHOENIX – Amanda Blackhorse, grasping burning sage in one hand and a bullhorn in the other, prepared to protest at a costume company’s Phoenix headquarters.

Blackhorse and her small group carried signs, shouting “People, not costumes!” and “You’re on stolen land!” as they walked around the parking lot, several of them wearing traditional skirts.

They were backed by an unseen contingent: More than 23,000 people across the country have signed an online petition calling for Yandy.com of Phoenix to stop selling more than 40 Native American costumes that organizers say misrepresent and sexualize indigenous people. 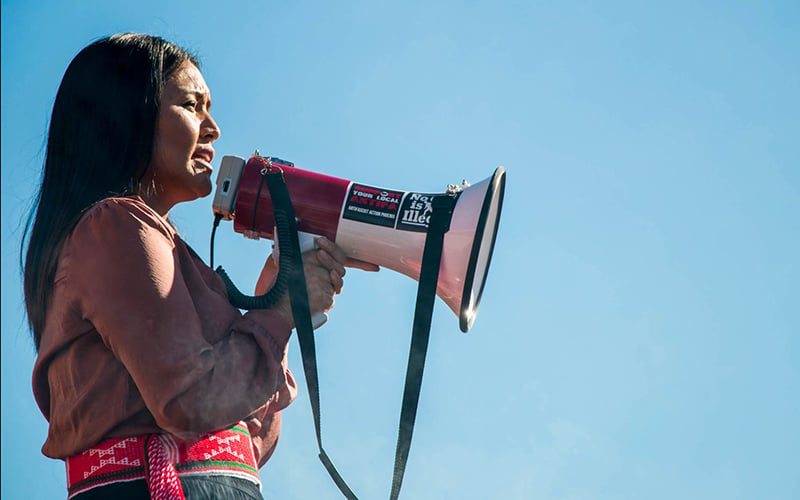 “Native women are opposed to the use of our image as costume,” Blackhorse said at Wednesday’s protest. “This is the era of Native people not putting up with cultural appropriation and using our identity for profit.”

The movement, which includes a Phoenix area woman who designs traditional clothing as a counterpoint to such costumes, is among a spate of controversies in recent years involving allegations of cultural appropriation and mistreatment of indigenous people. The discourse involves whether names of sports teams like the Washington Redskins are homage or humiliation, and whether a Phoenix street name that’s considered a pejorative for a Native woman is historical or hurtful.

The perennial debate over Halloween costumes involves a holiday that is a major economic draw, with retail sales estimated to reach $9 billion this year. Conflicting opinions weigh in on whether costumes fashioned out of feathers, headdresses and moccasins are fun – “Native American costumes Halloween” are sold on a slew of online sites – or siphon values from an indigenous culture.

Blackhorse, a Diné tribe member, said the costumes appropriate sacred native symbols and promote the perception that tribes are monolithic.

Pointing to a photo of a costume featuring a headdress, she explained the variation in traditional apparel among different tribes. The Diné do not traditionally wear headdresses, but Blackhorse emphasized the spiritual nature of feathers. 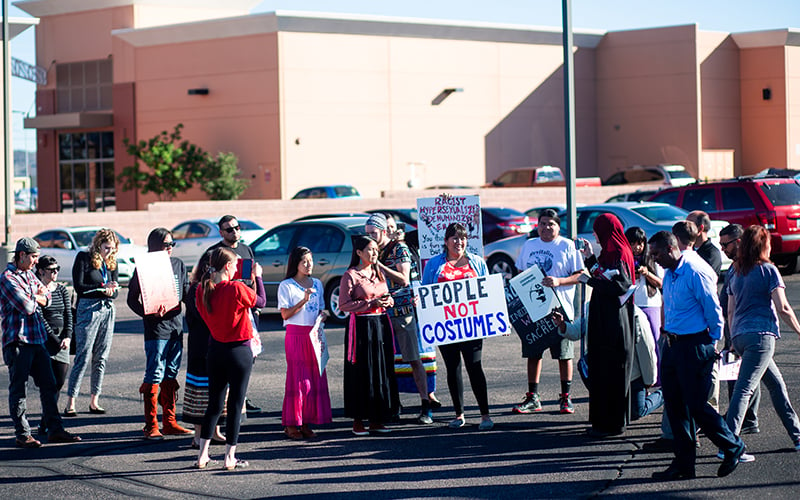 Amanda Tachine, a member of the Navajo Nation, holds up a sign during the protest against Native American Halloween costumes sold by Phoenix-based Yandy.com. They said Yandy has a history of producing sexualized Halloween costumes. (Photo by Anya Magnuson/Cronkite News)

“In my tribe, we do use eagle feathers as a form of prayer, and when people are mocking our culture in that way, using our spiritual images, to me that’s appropriation,” Blackhorse said. “That’s violence toward our people.”

Taté Walker took part in the costume protest out of concern for her preteen daughter. She said the sexualization and cultural appropriation of indigenous peoples lead to erasure, violence and voter suppression for indigenous populations.

“I have a 10-year-old who is a beautiful indigenous girl, who is going to grow up in a world that doesn’t respect her at all. It shows us at every corner that it doesn’t care about her at all.”

Walker, who lives in Phoenix, has tribal citizenry with the Miniconjou Lakota tribe in South Dakota.

‘Could you please leave?’

When protesters stepped onto Yandy’s parking lot, they were met by members of the Phoenix Police Department’s community relations team and a woman who identified herself as an human-resources representative for the company.

The woman, who would not comment on the costumes and did not give her name, asked protesters to leave the property.

“We appreciate your sentiment and understand your right to express your opinion,” she said. “Could you please leave?” 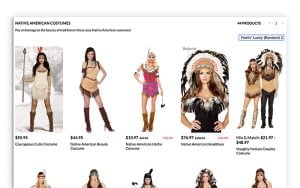 The protesters left the parking lot but stayed near the building.

Company representatives did not respond to multiple requests for comment.

In 2017, Jeff Watton, co-chief executive of Yandy, told Cosmopolitan magazine the company did not plan to remove the costumes from the site without “significant protest.”

The magazine quoted Watton as saying many young women “grew up with Pocahontas as a figure that they idolize or wanted to dress as.”

Opponents said they deserve the same respect Yandy gave others in September by removing for sale a costume depicting a character from the book and Hulu TV show, “The Handmaid’s Tale.” The series depicts a dystopian future where women are used as vessels to bear children.

The costume received mixed feedback on social media, with some saying it promoted feminism while others said it symbolized women’s oppression.

Yandy issued a statement apologizing for the costume to its 15,600 Twitter followers.

“Our corporate ideology is rooted in female empowerment, and gender empowerment overall,” the statement reads.

“A fictional TV character was able to get the respect that we’ve been asking for, for generations,” she said.

Halloween heightens attention on the ongoing debate over wearing costumes of different cultures shows appreciation or appropriation. The petition on Change.org that has been signed by more than 23,000 people asks Yandy to stop selling Native American costumes has helped the issue gain national traction.

Zoe Dejecacion, who lives in San Diego and is a member of the Chocktaw Nation of Oklahoma, created the petition in September. 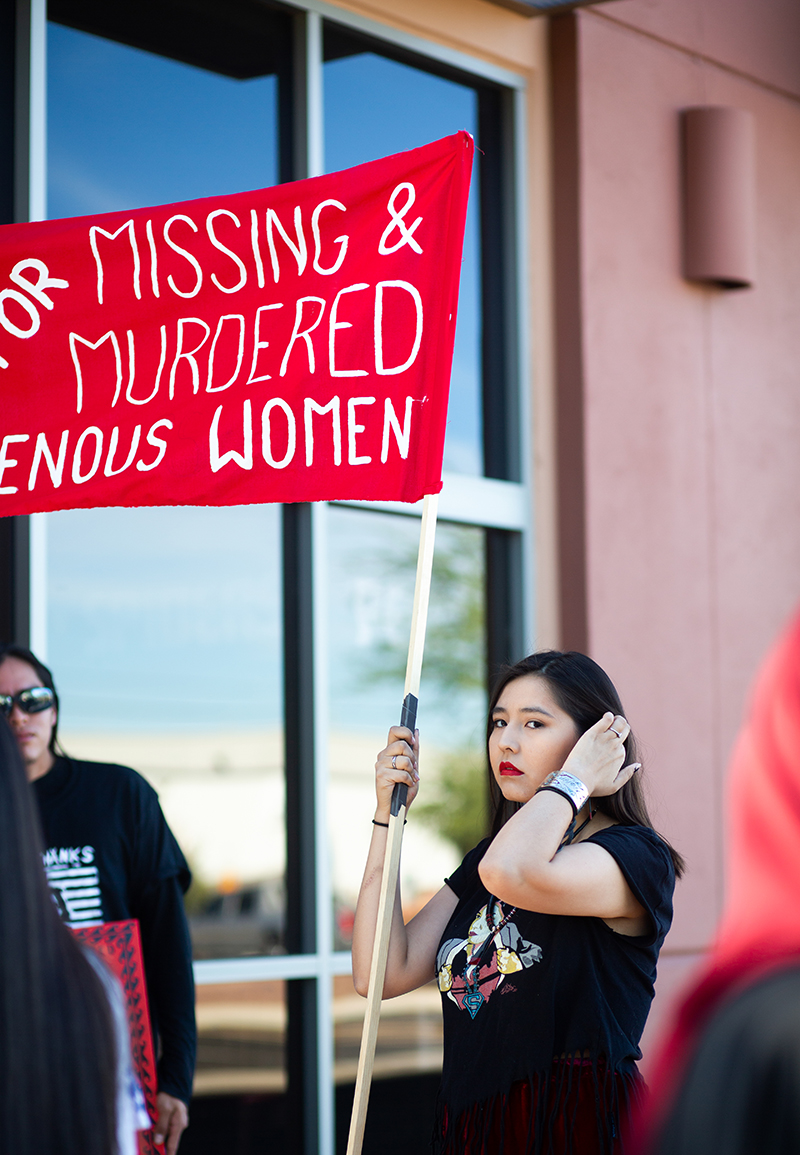 Dejecacion said she was not surprised the petition was well-received within the indigenous community but appreciates it has gained thousands of signatures. She called the costumes dehumanizing.

“They create this narrative that we are a fairy tale costume and not real people and not a real culture,” Dejecacion said.

The costumes also contribute to the disproportionately high rates of sexual assault and violence Native American women experience, she said.

Trevor Reed, an associate professor at the Sandra Day O’Connor College of Law at Arizona State University, said many people question the connection between the sexual nature of Native American costumes and the epidemic levels of violence against indigenous peoples.

“The stereotypes that these costumes are drawn from developed during periods of tremendous violence against indigenous peoples,” said Reed, whose work focuses on intellectual property rights and Native American sovereignty.

Reed, a member of the Hopi Tribe, said Native American costumes are further complicated by the fact that tribes likely would not claim Halloween costumes as part of their cultural traditions even though indigenous elements and symbols, like tomahawks and headdresses, often are incorporated in costumes.

“One of the fundamental problems with cultural appropriation is that it harms Native groups,” Reed said. “If somebody can simply just take on and take off a stereotype or an image representing a whole group of people at will, what else can they do to violate the rights of Native people?”

Sewing together a star quilt in her childhood bedroom turned sewing studio, Thomas reflected on the traditional Native American clothing she’s made professionally for seven years.

Cher Thomas wants people to respect Native American values rather than snatch pieces of a culture and twist it into inaccurate, painful depictions. “Somewhere between John Wayne and Disney’s Pocahontas, it became OK to objectify Native women,” she said. (Photo by Anya Magnuson/Cronkite News)

Cher Thomas designs and sews traditional Native American clothing to celebrate milestones in people’s lives. "You want your clothing to represent how and what you are,” she said. (Photo by Anya Magnuson/Cronkite News)

Cher Thomas works on a quilt in her home near Laveen. She usually works in her bedroom and hangs the finished clothes on a rack in the living room. (Photo by Anya Magnuson/Cronkite News)

A dress Thomas designed for her cousin’s upcoming sunrise ceremony – an Apache tradition when a girl transitions into womanhood – hangs on a clothing rack in Thomas’s living room. She doesn’t know when the ceremony will happen but the dress hangs ready.

Thomas said creating with intention is important. Many of the elements she adds to her customer’s clothing originate from family history and tribal tradition.

She wants people to respect those values, rather than snatch pieces of a culture and twist it into inaccurate, painful depictions.

“Somewhere between John Wayne and Disney’s Pocahontas, it became OK to objectify Native women,” she said.