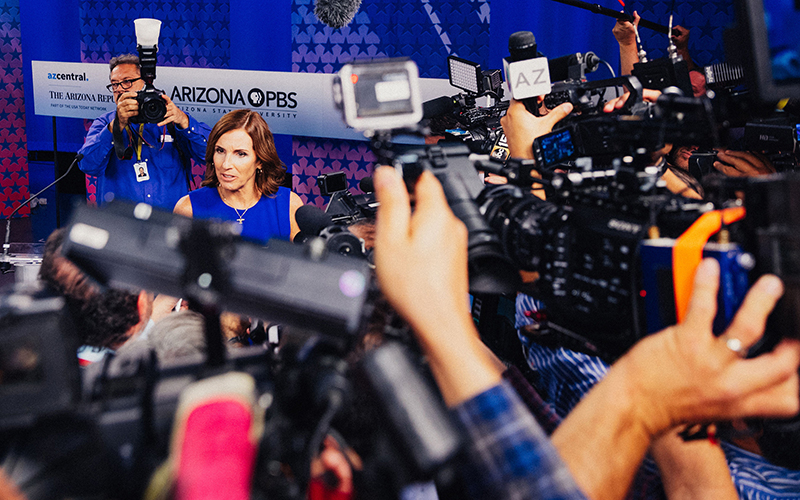 National security, particularly the security of the U.S.-Mexico border, is the top issue she hears from people, regardless of political party, the congresswoman said.

McSally said her congressional experience as chair of the House Border and Maritime Security Subcommittee has given her the chance to work closely with President Donald Trump’s administration and help lead the country’s path on border security, which she hopes to continue in the Senate.

But to her, the key to national security is to understand what the military requires, and she noted that fewer than 100 people in Congress have served in the armed forces.

“I know firsthand what our military needs in order to keep us safe,” said McSally, who was in the Air Force for 22 years.

“The Senate gives you a bigger platform to be a leader on national security and international security, but as a veteran, I also know specifically (that) we need to be fighting for the equipment, the training (and) the readiness crisis, which we’re starting to turn around,” McSally said.

She also said the country needs to prepare for “future threats and future capabilities,” listing nuclear deterrents, a space program and cybersecurity under that theme.

What other issues are important to you?

The congresswoman noted that economic security is a high priority for her campaign, especially with an economy she said is “on fire right now.”

“It’s more about jobs, opportunity,” McSally said. “You work hard, you can get ahead, you can provide for your family, get a pay raise, bring an idea to market, start your own business, have your kids move out of the house after they graduate from college to get a good job, and save for retirement.”

That matters to people regardless of voter registration, McSally said.

What in your past work, political or volunteer experience makes you a better choice for the Senate?

McSally, 52, said her military background gives her a mindset different from most politicians in Congress.

Valuing “country-first, service before self, integrity first” has specifically helped her focus on getting things done in the House, she said.

She expressed pride in having sponsored 20 bills that passed the House, two of which were signed into law.

“That sort of ‘no-nonsense, action-oriented, results-oriented’ mindset, in the midst of kind of a crazy Washington, D.C., environment,” motivates her, McSally said. She said still gets up every day and asks, “How do I get the mission done?”

McSally said her “deployment mode” helps as she campaigns for the Senate seat, which she said a lot of other candidates have not experienced.

“I have a lifetime of having to go seven days a week, for long periods of time for long hours,” she said. “To be able to function well and think straight and take care of yourself and don’t get sick. All of that experience in the military helps me right now. You can’t do it forever, but you can do it for pretty long periods of time because you just train yourself to, so I’m taking that same approach.”

“There’s only so much time in the day, and nobody wants to meet with me between midnight and 5 a.m.,” McSally said. “The challenge that we all have is that I can only be in one place at one time.”

Working on the campaign trail, in addition to being in session at Congress until the end of September, led McSally to ignore a few things back on the homefront.

“There are things breaking around my house right now that I’m going to have to just fix after Election Day because I don’t have time,” McSally said. “I just literally don’t have time to do hardly anything.”

McSally said she has called on the second part of the Bible verse Esther 4:14 for a long time.

“I don’t want in any way to compare myself to Esther,” she said, “but she was in a situation where she was given an opportunity and she had to take some risks and, when she was making her decision, this was the advice she was given. At many of the decision points in my life, to include running for Congress and now running for the Senate, it has been something that has inspired me and propelled me to action.”

She uses Wunderlist, which allows users to manage their tasks in the virtual cloud and access them from a number of devices.

The congresswoman said voters should look closely at the path the two candidates running for U.S. Senate have taken.

In contrast to her military background, McSally called her opponent devoted to “radical-left activist stuff.”

“You spend your life giving your passion and your leadership to something, look at that contrast, and then ask yourself, ‘Which is better lined up to who represents Arizona’s values?’ Because the contrast is pretty clear.”