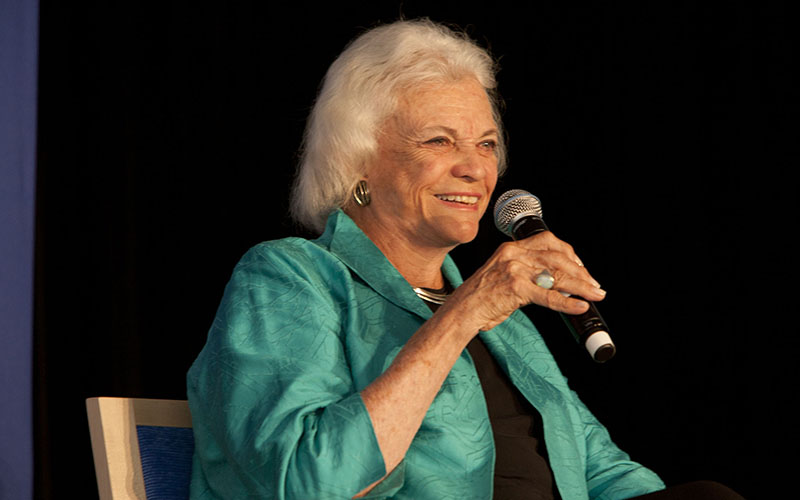 Retired Supreme Court Justice Sandra Day O’Connor, an Arizona native and the first woman on the court, announced her withdrawal from public life Tuesday after a diagnosis of early stages of dementia. (Photo by The Aspen Institute/Creative Commons)

WASHINGTON – A flood of professional and personal tributes poured in Tuesday for former Supreme Court Justice Sandra Day O’Connor following her announcement that she was stepping away from public life after receiving a diagnosis of dementia.

O’Connor, an Arizonan and the first woman to serve on the high court, said in a letter released by the court that she is in the early stages of what is likely Alzheimer’s disease. But she urged others to pick up the commitment to civic education that has been her mission since she left the court in 2006.

“I can no longer help lead this cause, due to my physical condition,” O’Connor wrote. “It is time for new leaders to make civic learning and civic engagement a reality for all.”

Friends, colleagues and others from legal and political circles in Arizona and beyond paid their respect to the legacy of the woman that one described as “the most powerful woman in the country” during her quarter-century on the high court.

Chief Justice John Roberts praised O’Connor for “the many paths she has blazed” for the women who followed in her footsteps in the legal profession. His was one of 12 statements, from all nine current and three retired justices.

“She broke down barriers for women in the legal profession to the betterment of that profession and the country as a whole,” Roberts said in a statement Tuesday. “She serves as a role model not only for girls and women, but for all those committed to equal justice under law.”

Those who knew her alternated between remembering O’Connor for her political and judicial legacy, and admiring the woman who was able to have a demeanor that was simultaneously authoritative yet sunny.

“She’s one of the most significant Americans of our time,” said Grant Woods, the former Arizona attorney general who praised O’Connor’s independence as a jurist. “I think that she was the most powerful woman in the country during most of the time she was on the U.S. Supreme Court.”

O’Connor was nominated to the Supreme Court in 1981 by President Ronald Reagan, who had promised to nominate a woman to the high court during the campaign in an effort to appeal to women voters.

“It was important that a woman do a fantastic job and she did,” Woods said. “For all the chauvinists out there who thought a woman couldn’t do the job, that was quickly dispelled by Justice O’Connor.”

Described as a swing vote during her time on the court, many likened her to the recently retired Justice Anthony Kennedy. Paul Bender, a professor at the Sandra Day O’Connor College of Law at Arizona State University, said liberals could hope to get either O’Connor or Kennedy on their side when the two were on the court.

“I don’t know why Reagan appointed her, I think he thought she was very conservative,” Bender said.

That was echoed by Woods, who said O’Connor “was not a hardcore ideologue. She was often the swing vote and the person who could establish consensus.”

Prior to her appointment to the court she served as majority leader in the Arizona Senate, the first woman to do so in any state. Bender said he believes that background had a large impact on her judicial style.

“She is as far as I know the only Supreme Court justice in recent years who had any meaningful political experience,” Bender said. “I think that was a tremendously important thing for her on the court … and I think you see that on a lot of her opinions, they’re very down to Earth, commonsense.”

Former Rep. Jim Kolbe, R-Tucson, said he worked closely with O’Connor shortly after she left the Legislature in 1974 for a Maricopa County Superior Court judgeship, a position she held until she was elevated to the Arizona Court of Appeals in 1979. He praised her “razor-sharp” mind which he saw on display when she and him worked to rewrite Arizona’s criminal codes.

“She was one of those people when you met her and saw her you knew this was somebody who really knew what they were doing,” Kolbe said. “And yet she was always cheerful … friendly and yet authoritative at the same time.”