VENTURA, Calif. – Arizona is no stranger to gigantic wildfires, such as the Wallow Fire in 2011, which burned more than half a million acres and destroyed dozens of buildings. California has experienced two of the largest fires in its history within the past year.

These wildfires are going to become more of the norm in the decades to come, according to new research from the University of Arizona.

Don Falk, a professor at the university’s School of Natural Resources and the Environment, along with a team of experts, used 35 years of climate and forest-fire data to study the relationship between seasonal climate and how much land wildfires destroy.

Their published research shows Western states will see an increase in how much land will burn within the next two decades. Falk said this spike is created by fires of all sizes, not just catastrophic fires such as the 2017 Thomas Fire in Southern California, which killed two people and destroyed more than 1,000 structures and 281,893 acres in Santa Barbara and Ventura counties. It took six months to extinguish.

“Will we see California-type fires in the future?” Falk asked. “I don’t want to be a prophet of doom. I’m a scientist, but I would have to say yes.”

Longer fire seasons play a role in his predictions. His team’s research shows that fire season in many parts of the West now begins in March and continues through October.

“You’ve got maybe 50 percent more time during each year for a fire to continue to burn. So that’s part of why the area burned could be increased dramatically in the future,” he said.

Falk said it all boils down to one thing: climate change.

“This is why the study, we think, is so important, because it clearly ties the increase in wildfire area to the inescapable reality of climate change,” he said.

Wildfires multiply the effects of climate change because trees quickly die off and animals are displaced, Falk said. This usually takes decades to happen.

“Wildfires can make that happen literally overnight,” he said.

Suzette and Tom Privitelli of Ventura, California, know all too well the power of these huge wildfires. They lost their home of 18 years, and everything in it, to the Thomas Fire last December. 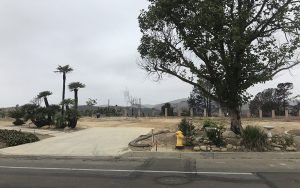 Suzette and Tom Privitelli of Ventura, California, lived in a house on this land for 18 years. Their home burned to the ground in the Thomas Fire last December. They plan to rebuild on this land. (Photo by Emily Fohr/ Cronkite News)

Suzette Privitelli remembers watching the fire climb over the mountains behind their home.

“They’re (fire officials) going to tell you, ‘Walk out of your house,'” she said. “You’ve got one little duffle bag, you lock your door and you never go back.”

The Privitellis are renting a home while they rebuild on their property.

“You can’t live your life in complete fear,” Suzette Privitelli said. “I’m not going to let this ruin my life.”

Falk said the West isn’t necessarily an unsafe place to live just because the threat of increased wildfires exists.

“We can certainly build and site our developments in areas that would be safe,” he said. “That would provide ways to get out, and we’d be less likely to be exposed to fire in the first place.”