WASHINGTON – A federal appeals court let stand its earlier ruling against an Arizona death row inmate who brutally murdered his new wife near Phoenix just before Christmas 1988 – one day after a $400,000 insurance policy on her took effect.

A panel of the 9th U.S. Circuit Court of Appeals had ruled in December that even though Michael Apelt’s attorney failed to investigate his abusive childhood, that evidence would not have been enough to prevent Apelt’s death sentence.

The full court declined this week to reconsider that ruling, despite a sharp dissenting opinion that the earlier ruling wrongly treated Apelt as an “irredeemable ‘monster'” whom no amount of mitigating evidence could have saved.

“Rather than substantively engage with the mitigating evidence that Apelt presented, the panel characterizes him as an irredeemable ‘monster’ and suggests that no amount of mitigation could have outweighed the nature of the premeditated murder of his wife,” Judge Richard Paez wrote in his dissent Thursday.

“This was no true balancing analysis by the panel,” Paez wrote. “This was judicial condemnation.”

Apelt was convicted for murder and conspiracy in the stabbing death of his wife, Cindy, less than two months after they were married in October 1988. 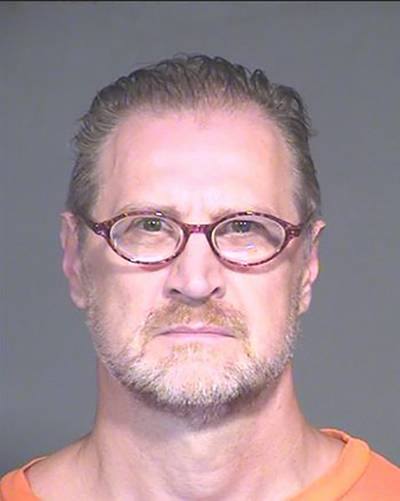 Michael Apelt was sentenced to death for the 1988 murder of his wife of less than two months, who was killed near Apache Junction the day after he got a $400,000 life insurance policy on her. (Photo courtesy Arizona Department of Corrections)

Court records said that Apelt, then 25, came to the United States from West Germany with his brother, Rudi, his brother’s wife and Michael’s ex-girlfriend, when the two brothers began “‘courting’ numerous women.” They were in Phoenix on Oct. 6 when Michael met Cindy Monkman – concocting a series of stories that led to her marrying him three weeks later.

Shortly after their marriage, Michael tried to take out a $1 million insurance policy on Cindy, later settling for $400,000 in coverage when the first policy was denied. They got the policy on Dec. 22, and on Dec. 23 Michael and Rudi drove Cindy to the desert near Apache Junction where she was found beaten and stabbed to death after Michael reported her missing.

The Apelts were arrested in early January. Michael was convicted in 1990 and sentenced to death, while Rudi is serving a life sentence.

A federal district court later agreed that Michael’s attorney at trial and at sentencing was ineffective for failing to investigate and present evidence of his client’s troubled history.

Court records said Apelt was “a child of rape,” hated by both his parents and raped on at least two occasions as a child. His father, an alcoholic and former Nazi, would chain Michael and his brother in the basement and beat them to the point of unconsciousness, and raped Michael’s sisters. The courts said that when Michael got a tattoo from a friend, his father burned it off and punched the boy in the mouth when he screamed in pain.

Paez said Apelt’s attorney, Michael Villareal, was aware of that mitigating evidence, but did not look into records from hospitals, employers and social service agencies, or interview witnesses who could have attested to that history. The attorney did not get “readily-available medical health records from the Pinal County jail” that would have shown Apelt was medicated and on suicide watch.

But the 9th Circuit in December overturned the district court ruling, saying that while Apelt’s attorney was ineffective, there were “reasonable arguments” that any mitigating evidence presented from his childhood “would not have changed Apelt’s sentence.”

Paez took issue with that rationale, saying that such mitigation evidence must be considered because it allows the jury “to make a ‘reasoned moral judgment’ about whether a defendant deserves mercy in spite of his conduct.” By the court’s standard, he said, “defendants convicted of premeditated murder can never demonstrate prejudice” in their trials.

Attorneys for the state and for Apelt did not respond to calls for comment.