PHOENIX – Forty-six years have passed since Title IX of the Education Amendments Act was enacted by the federal government, requiring equal opportunity for women in educational institutions.

Although it opened doors for female athletes, women who coach women’s sports have not experienced the same growth.

“I think we still live in a society where sports is a fairly male domain, and the decision-makers are male,” said Amy Wilson, director of inclusion at the NCAA. “A lot of times, they hire people they are comfortable with.”

Despite higher participation numbers among women in college sports, the coaching jobs in those sports often go to men. The NCAA report also found more men than women are serving as assistant coaches in women’s sports.

The NCAA monitors hiring practices and has partnered with the Tucker Center, which issues a yearly report card, grading universities on their efforts to hire female coaches. The three Division I universities in Arizona have a combined 36 women’s sports, with 12 women leading those programs.

Seventy-seven percent of athletic directors across the country are male, Wilson said, and she believes they tend to hire people with whom they are familiar – often other men.

“I’m not saying that they don’t hire women,” she said, “but there is research to show that they hire people that they are used to. I think women are still trying to enter a largely male-dominated system within the NCAA structure.”

Ray Anderson, Arizona State’s vice president for university athletics, believes one factor is the growth in salaries for coaches in women’s sports.

“The women’s positions financially are starting to pay more and more, and the pay gap is decreasing,” Anderson said. “Therefore, men are more inclined to apply and take those jobs if offered.”

Wilson has other theories about why women don’t get coaching opportunities.

“The lack of work-life balance in coaching does discourage some women from either going into it or staying in it, I think, more so than men,” she said.

Turner Thorne, who has three sons, said the workload that comes with coaching makes finding that balance difficult.

“Coaching is a very unhealthy profession,” she said. “We work every day of our lives. Every day. If you’re going to be successful, and you’re any good, you always have your team that you’re responsible for. You’re always recruiting, every day. And I just think sometimes women that want to start families, occasionally, will opt out more than men.”

Turner Thorne has an all-female coaching staff in assistants Jackie Moore, Angie Nelp and Briann January. Among the 65 Power 5 conferences women’s basketball programs, her coaching staff is one of just 11 made up entirely of women.

She believes it can be an advantage to have female leadership in women’s sports.

“I think it’s a real positive for women to be coaching women because I think we’re role modeling for them,” Turner Thorne said. “I’m not anti-men coaching, I want to be clear about that. But I do feel like women provide perspective. When you’re coaching women at the collegiate level, you’re like a surrogate mom. So there’s a lot of things you provide.”

A simple solution, some believe, could be the implementation of a rule forcing institutions to interview minority candidates similar to the NFL’s Rooney Rule.

Established in 2003, the rule requires NFL teams to interview at least one minority candidate for head coaching and football operations positions.

However the NCAA, when it explored the idea, ran into hurdles.

“We hit a roadblock when we did a legal analysis of it,” Wilson said. “This is how the NCAA and NFL are different. We’re a nonprofit, membership-driven association, and the NFL is a private entity. They can set that kind of rule for their membership. We would have ran into some legal issues for something similar to the Rooney Rule and this is why we ended with the voluntary pledge.”

Without the option of something like the Rooney Rule, the NCAA believed a way to curb the trend away from hiring women to coach was the creation of the NCAA Presidential Pledge.

The document states that each institution and member that voluntarily signs it “commits to establishing initiatives for achieving ethnic and racial diversity, gender equity and inclusion, with a focus and emphasis on hiring practices in intercollegiate athletes.” 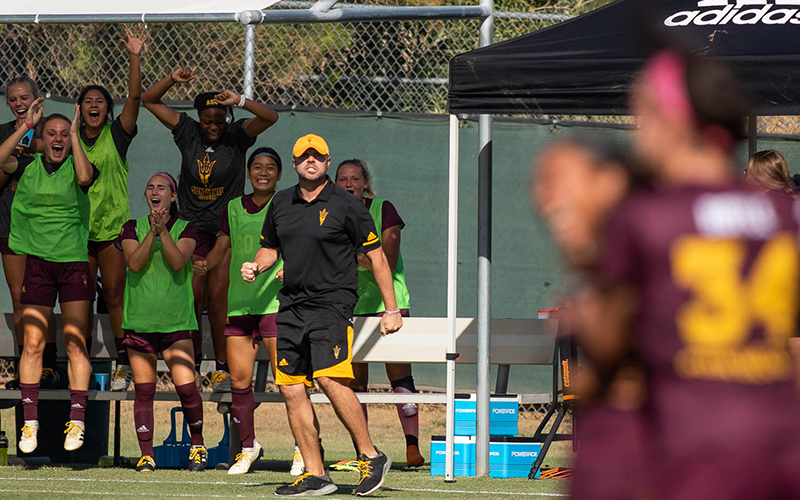 ASU women’s soccer head coach Graham Winkworth celebrates a goal in a match against Colorado on Thursday. He is one of nine men who coach women’s sports at the university. (Photo by Celisse Jones/Cronkite News)

Although neither Anderson nor Mike Marlow, Northern Arizona’s vice president for intercollegiate athletics, cited specific initiatives aimed at hiring more women, both said they are committed to honoring it.

“It’s very important to us that we have a diverse pool of candidates that we’re considering for, not just head coaching positions, but also within the staffs of our female and male programs,” Marlow said.

Anderson said University President Michael Crow also is committed to the pledge, and added that the school is recruiting and hiring female coaches whenever they are the best available candidate for ASU’s student athletes.

Wilson said it is up to each institution to live up to the pledge.

“It’s one thing to sign it, and almost 80 percent of our schools did,” Wilson said. “It’s quite another to actually commit to (it with) actions.”

Marlow, who took over as vice president for athletics at NAU in January, expressed a desire to help improve diversity.

“I wasn’t here at the time those hires were made,” Marlow said of the Lumberjacks coaching staff. “I do have an opportunity in the near future to hire our women’s tennis coach, and we’ll try to get the very best candidate and have a diverse pool to choose from.”

Anderson isn’t concerned about the numbers as much as he is the quality of his coaches.

“We’re hiring the best we can for the position,” he said. “I can tell you that in all positions where we have men coaches in female sports, the candidate pool included female candidates and were taken seriously. We are going to have an open and inclusive process, but at the end of the day, we’re going to hire what we think for our team and our culture is the absolute best fit.”

Marlow believes the implementation of a mentorship program can open the door for more women to go into coaching.

“I think a lot of it is role models and mentoring,” Marlow said, adding that mentoring bonds can be established with student volunteers in coaching or administration and with graduate assistants to help guide future coaches.

Turner Thorne believes mentoring other women can be a driving force, helping increase the number of women entering the profession.

“The women that are coaching encourage the mentoring and hiring of their players, and it starts at hiring them at young positions,” she said. “You see a lot of coaching staffs who have males in their video positions, and they have them as their managers. In my growth positions, I pretty much exclusively look for women.

“I think, in general, it’s important for the WBCA – the Women’s Basketball Coaches Association – and the women’s basketball community to recruit and mentor women to coach women.”

Turner Thorne said women need to hold those positions to be mentors.

“One hundred percent of the people playing women’s basketball are girls. If you want to have role models and offer a great female mentoring perspective, then you better have some women.”

Wilson suggests that conferences and institutions should track the diversity of hiring pools and hold institutions more accountable. Ultimately, she said it is up to university presidents or chancellors to live up to the Presidential Pledge.

Wilson recalled a university president telling her that he was provided a list of candidates for his open athletic director position and told Wilson, “It only took me once to say, ‘I don’t accept that candidate pool, since it doesn’t have enough diversity.’ I want more people of color and I want more women. I want you to bring that back to me when there’s more diversity.”

It takes leadership like that to create opportunities for women in coaching, Wilson believes.

“Once the president or chancellor sends that message, it usually trickles down, and you’ll see that there’s going to be better pools in terms of diversity coming forward,” Wilson said. “I think it takes decisive actions by the key leaders if we’re really going to see the needle move in this space.”