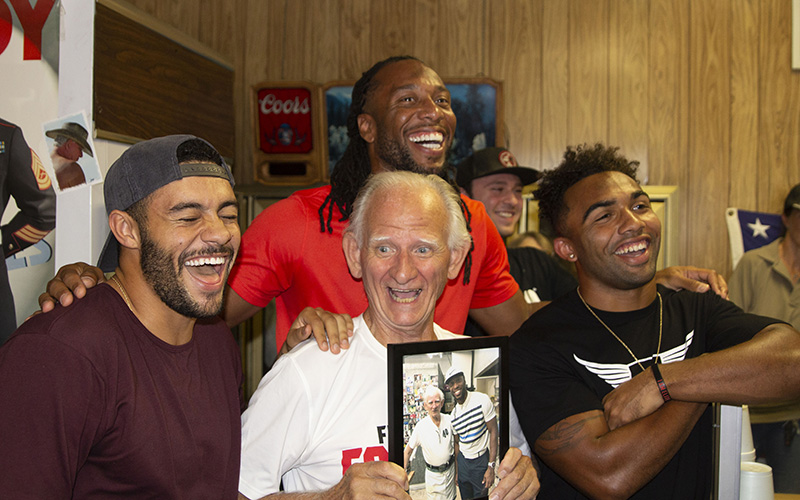 SCOTTSDALE – Joe Casella opened the doors to his deli in 1976, just a few blocks from Saguaro High School.

Forty-two years later, the two remain equally important to one other, with Casella’s Deli a mainstay in the lives of Saguaro High families for decades.

That was evident after Casella learned in August that he has terminal colon cancer. On Sept. 18, Saguaro alumni D.J. Foster and Christian Kirk, along with their Arizona Cardinals teammate Larry Fitzgerald, who’s a Casella’s regular, bought lunch for all patrons during a five-hour stretch to raise money for the family’s medical bills.

Word of the fundraiser had spread quickly. When the family arrived to begin prep work that morning, money from an anonymous donor already had been slipped under the door.

“Community” is the first word that came to Saguaro High School Principal Ann Achtziger’s mind when she thinks of the Casella family.

“This is my ninth year in the Saguaro learning community, and coming into this community, everyone knew Casella’s Deli,” she said. “They’re a staple here at Saguaro High School.”

The family atmosphere is evident.

Patrons who enter Casella’s are greeted by a chorus of people shouting orders and the sight of sandwiches being made fresh, not to mention family members who treat visitors like one of their own. 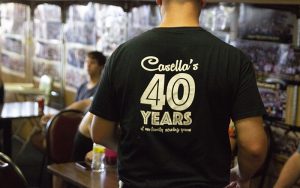 Family is important to Casella, and to most of his workers – some of whom are Saguaro alums.

“Any time I say I want to change the ‘I’ to ‘we’ because it’s family, it’s just not about me,” Casella said.

When Casella was diagnosed in August, the announcement shook the Saguaro High community. As word spread about Cardinals players helping the cause, the community responded.

For most, the wait time for lunch that day was a small price to pay to help the Casellas. For the next few hours, the line extended out the door and along the strip mall where the deli is located. More than a thousand people cycled through the restaurant, some waiting hours to get their free lunch.

Like clockwork, Casella would go outside, greet everyone in line and do a little dancing with the DJ playing music outside before heading back inside to check in with his family.

“The Saguaro community is special,” football coach Jason Mohns said. “People that don’t know much about it don’t realize that people take a lot of pride in the people that support us.”

For years, Casella has been an integral part of the Saguaro community. The deli provided platters of sandwiches for the school’s 50th anniversary a few years ago, and has been providing food for Saguaro families for years.

At any Saguaro football game, chances are you’ll find Casella among the crowd.

“I go to the football games (and) I take food and cannolis and cookies and give them out to whoever is sitting around me,” Casella said. “I give them them to the announcers and at halftime they say, ‘And don’t forget Casella’s Italian Delicatessen for what he does for us and everybody at Saguaro High School.’”

Those in the crowd aren’t the only one benefiting. Casella also has been providing free food to the football team after home games, and for Foster, it was a memorable part of his Saguaro career.

“It’s an unbelievable feeling, especially after a win,” Foster said. “It’s always a treat getting his food. The food is amazing. That’s the one thing about it, it’s good food.”

For Foster, Casella’s was a staple of his high school experience playing football at Saguaro.

For Fitzgerald, Saguaro alumni and the community, the motivation was clear. They wanted to help a man and a family who has done so much to help them.

“Be there for the Casella family right now during this time,” Achtziger said, “as they have for us for all of these years.”