Hikers, cyclists and even those riding horses share space on Phoenix’s many trails. The large crowds have frustrated some. (Photo by Isabella Sisneros/Cronkite News) 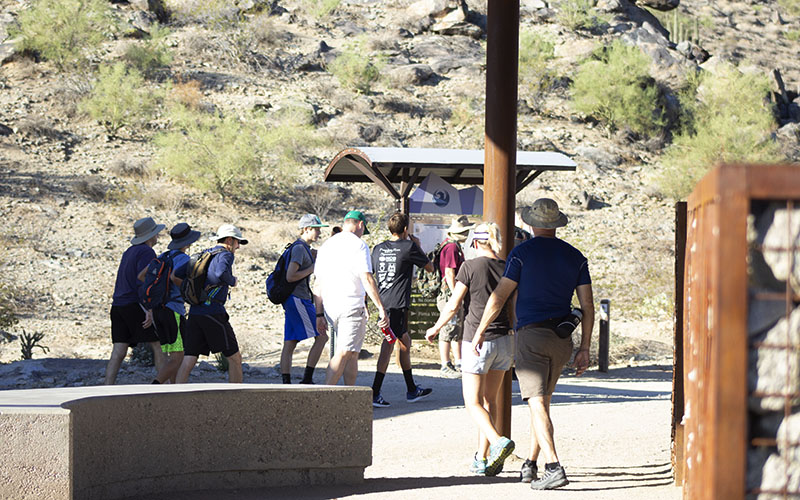 Counters placed by Phoenix Parks and Recreation at the 41 trailheads the department maintains tallied more than 3.45 million users in 2017. (Photo by Isabella Sisneros/Cronkite News) 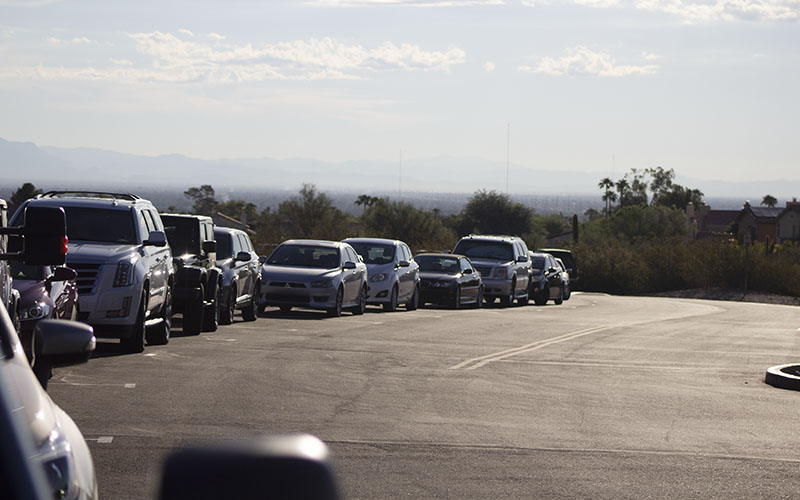 Long car lines like this one to get to the Pima Canyon Trailhead at South Mountain Park are not uncommon, especially on weekends. (Photo by Isabella Sisneros/Cronkite News) 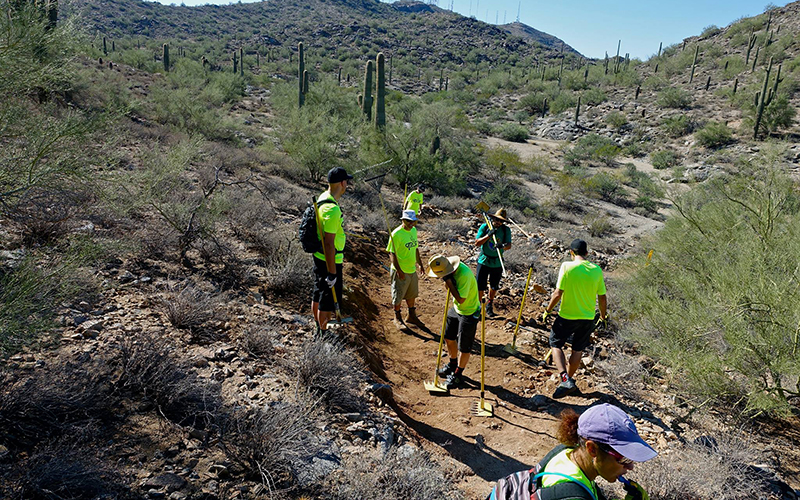 Volunteers, including these with the Gravity Riders Organization of Arizona, are essential to the care and maintenance of the more than 200 miles of trails in the Phoenix Mountains Preserve. (Photo courtesy of Ken Bennett/GRO-AZ)

PHOENIX – Heavy street traffic in Phoenix is common. With more than 4.7 million people now calling the metropolitan area home, it is no surprise people seek solace on the hiking, biking and horseback trails across the city.

Crowds, however, have become an issue on some of the more than 200 miles of trails that wind through 41,000 acres of desert and mountain parks and preserves within the city. That has caused tension among some users and encouraged some to venture off official trails into areas where they’re not supposed to be.

“Bikers – not all, but pretty close to the majority of them – have one thing on their mind and that is to get their ride in as fast as they can, challenging themselves all the way,” said Roy White, who has been hiking Arizona trails for the past 11 years. “That is not a good combination for hikers.”

Counters placed by Phoenix Parks and Recreation at the 41 trailheads the department maintains tallied more than 3.45 million users in 2017. Gregg Bach, public information officer for department, believes the actual number of users is much higher because of unofficial access points.

“We like to say that our trails are loved to death,” Bach said.

According to the most recent U.S. Census Bureau report, the population of metro Phoenix has increased nearly 13 percent since the last full census in 2010. The area also is a popular vacation destination in winter.

“So, it’s an increase in visitors, and also that increase of population, that I think all plays a part in that (overcrowding),” Bach said. “We have a lot of people that visit here during the winter or spring. Maybe they are trying to escape the cold back East or coming out here for spring break or spring training.”

Bach said major events taking place in the Valley, including the Super Bowl, college football national championship games and the Final Four basketball tournament have contributed to the uptick in trail use.

Some tensions among users

Signs along most multi-use trails have a triangle that shows the expected etiquette: Riders on horseback aren’t required to yield to bikers or hikers because horses can be unpredictable. Hikers must yield to horses. Bikers must yield to all other users.

“It’s just a situation where you ask people to be respectful, same as if you were driving on the street,” Bach said.

Many hikers like White contend a lot of mountain bikers play by their own rules.

“Sometimes (the mountain bikers) ride up behind me and then get mad because I didn’t move,” said Scottsdale resident Erin Parker, a longtime hiker. “I didn’t even hear them coming but they’re yelling at me.”

Some bikers rely on popular cycling apps that use the Global Positioning System (GPS) to record distance and speed to track their routes. Many of the applications are paired with a social media platform so users can post their rides for others to see. It creates competition to post the fastest time up an incline or over a route.

Despite the need for speed, avid Arizona mountain biker Carlos Martinez said he has had a good experience with all types of trail users and that tensions are resolved with positivity. 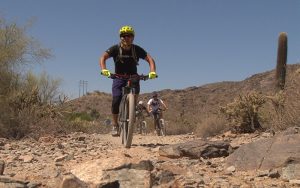 Mountain bikers on one of the Valley’s busiest multi-use trails, the Desert Classic Trail at South Mountain. (Photo by Jake Trybulski/Cronkite News)

“Everything is about attitude,” Martinez said. “Horses get scared, so knowing that, if I see somebody on horse, I stop and let them go by. If I don’t see them, and I kind of come in hot, I stop and I apologize and have a conversation, whether it is a hiker or an equestrian. If you have a good attitude, everyone stays positive and you are good to go.”

Mountain biker Ken Bennett has been riding in Arizona since he moved from Louisiana in 1994. He’s part of the Gravity Riders Organization of Arizona, or GRO-AZ, a group committed to trail advocacy.

However, Bennett thinks there’s a stigma attached to mountain bikers because of the nature of the sport.

“You have a little bit of a negative aspect from a lot of people,” he said. “They see you with a full-face helmet, body armor and a big bike and it looks scary. So it helps to be an ambassador to land managers and to the other groups to show we are just more trail users.”

GRO-AZ volunteers help make the Valley’s trail system sustainable. With the increased population and use, along with natural erosion from the weather, Phoenix trails demand regular maintenance.

Dan Gronseth, manager at South Mountain Park and Preserve in Phoenix, spent 28 years as a Phoenix park ranger before taking his current job in 2016. He emphasized the importance of volunteer work.

“Volunteer work is huge, huge for us,” Gronseth said. “I don’t have the numbers, but there are a lot of volunteer hours that we get every year, and we could not operate without that.”

Although some trails are roughed up, others are changed to accommodate the new users migrating to the area.

Alan Shelton, trails advocacy director of the Mountain Biking Association of Arizona, said features on some popular trails have been altered by beginner mountain bikers.

“You get this whole big flux of new riders, or what we call ‘dirt roadies,’ people who are transitioning from road bikes to mountain bikes, and they have trouble with that,” Shelton said. “So they will kind of dumb down the feature to where they can ride it rather than advancing their own skills … so to me that’s a big problem.”

Maintaining existing trails is one issue. Keeping people on them is another.

As congestion clogs such popular multi-use trails as Desert Classic at South Mountain, more and more users are heading off sanctioned paths and constructing their own “social trails.” This a safety concern and damaging to the environment.

It is not uncommon to see trampled plants damaged by hikers and cyclists on these unsanctioned trails. 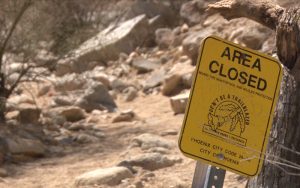 A sign along Kiwanis Trail at South Mountain warns against trailblazing. Damage to landscape off the beaten path can take decades to return to natural condition without proper repair. (Photo by Jake Trybulski/Cronkite News)

Marked trails on Phoenix preserves are tagged with Quick Response (QR) barcodes placed on posts that help trail users be located if they are lost or injured. With unmarked trails, it becomes extremely difficult for rescue teams to find a person in distress. And the farther a user ventures off a marked trail, the harder it can be to find a cell signal to phone for help.

In addition to being unsafe, wandering off marked trails harms the fragile desert landscape.

Wildlife in the Sonoran Desert includes the desert tortoise, lizards, coyotes, javelins, jackrabbits, bats and rattlesnakes, along with a plethora of cactuses, mesquite and palo verde trees and other desert plants.

The ecosystem is sensitive and with people continuously trampling through unsanctioned parts of Phoenix Mountains Preserve, it could take decades for the land to return to its original condition.

“Sometimes we will do an entire trail day and that’s all we’re doing, repairing damage from people cutting around things,” Bennett said.

Often, trail users are not even aware they are on an unsanctioned trail or shortcut. Many social trails are so beaten into the landscape that they look like a sanctioned trail. It just takes one person to start the social trail and others follow.

Along with signs, park rangers may place fencing or move large boulders across a social trail to prevent users from leaving designated paths. But that can also alert users that there is a social trail trail there, and they will explore it.

Ranger Taylor Riske has been researching the most effective way to keep people on sanctioned trails. As part of his study, he was perched in a lookout over Kiwanis Trail at South Mountain Park to observe hiking patterns.

These are photos of Kiwanis Trail at South Mountain before and after mitigation work by Phoenix park ranger Taylor Riske, who is completing a study to find the most effective way to keep people on sanctioned trails. (Photo by Taylor Riske/City of Phoenix)

“The trail forks in two different directions, and people would just stand there with their hands up and be like, ‘OK, which way do I go now,’ because the social trail looks like a regular trail,” Riske said.

After speaking with other rangers and reading previous studies, Riske believes the process of trail mitigation is the best way to fight rogue trail users. Trail mitigation involves moving rocks and sand around to disguise the unsanctioned trail so that it looks like the surrounding desert.

“The problem is, I come back a week later and someone tried to come in and remove the mitigation,” Riske said. “That’s because I’m sure we have a person who’s been hiking the trail for 10 years and says, ‘Screw you, this is my trail.'”

Although unsanctioned trail issues arise in many places around Arizona, South Mountain Park is in the midst of a $23 million renovation process expected to be completed in 2021 according to Bach. It is the first renovation project at the park since 1989.

The improvements will include upgrades to park facilities and a new master trail plan.

Outdoorsmen are curious by nature, so park rangers know people are going to try to explore off-trail areas. However, repeat rogue users can receive a citation and fine if they’re found off marked paths.

“People do have a mindset, and they will do what they are going to do,” Gronseth said.

“But If you explain it, and then they choose to do it, then it really puts it more on them.”