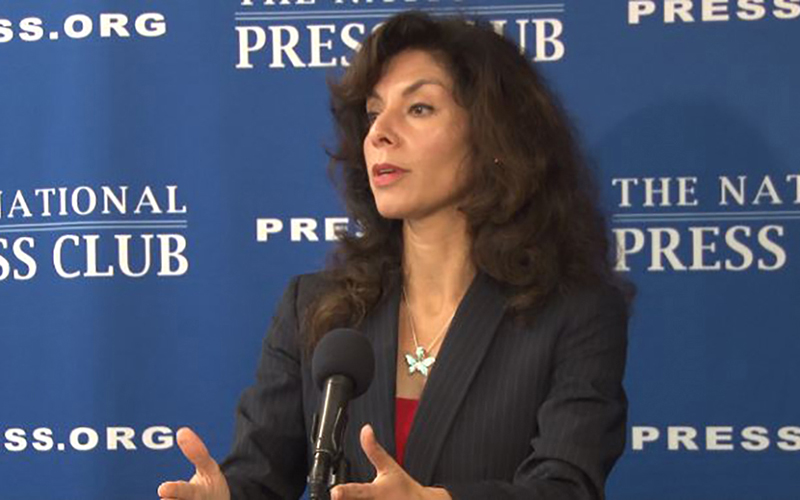 Judge Ashley Tabaddor, president of the National Association of Immigration Judges, called new Justice Department quotas on the number of cases judges have to hear a “lose-lose” situation for immigration courts and those who come before the courts. (Photo by Daniel Perle/Cronkite News)

WASHINGTON – The president of the National Association of Immigration Judges criticized Attorney General Jeff Sessions on Friday for what she called unrealistic standards his Justice Department has set for immigration courts.

Judge Ashley Tabaddor also renewed calls for immigration courts to be independent of the Justice Department, so judges are not in the “untenable” position of trying to satisfy a politically appointed attorney general while ensuring due process for those who come into their courts.

“Independent courts and judges in our American judicial system rely on numbers to address questions such as staffing or training,” Tabaddor said in a news conference at the National Press Club. “But never do they use numbers in such a manner to pit a judge’s livelihood against the interests of the parties before the court.”

A request for comment from the Justice Department was not immediately returned Friday.

The push by the Justice Department to set quotas and deadlines on immigration judges comes as those courts face a backlog of 750,000 pending cases nationally, with an average wait of more than two years for a case to get a hearing.

In Arizona this year, there are 10,635 pending cases, and the average wait time was 619 days, according to data from the Transactional Records Access Clearinghouse. TRAC data said that more than 8,000 of the Arizona cases were in Phoenix courts, with the rest split between Eloy, Tucson and Florence.

Against that backdrop, the Justice Department has set quotas that are scheduled to kick in on Oct. 1. Tabaddor said the department’s expectation that immigration judges should handle 700 cases a year is unrealistic, given the wide variance in cases on any one judge’s docket.

She called the implementation of quotas an “unprecedented act, which compromises the integrity of the court” and “undermines the decisional independence of our immigration judges.”

Quotas create a lose-lose situation for immigration judges and those who come before them in court, Tabaddor said. If a judge cannot process the number of cases set by the quotas, it puts his or her job at risk, but making it a priority to meet quotas could threaten the parties’ due process rights.

Tabaddor also said that quotas ignore the fact that many immigration cases have life-and-death consequences for those involved. Not only are defendants appearing in immigration court often having their first experience with the American legal system, which can be overwhelming, but 85 percent of cases require an interpreter, she said.

Tabaddor said her organization has raised its concerns about quotas with Justice Department officials, with little response.

Friday was not the first time Tabaddor’s association has called for immigration courts to be taken out from under the oversight of the Justice Department, and it is not unique to the Trump administration. But any such move would require an act of Congress.

Tucson-based immigration attorney Mo Goldman said he is sympathetic to the judges concerns about quotas, saying the change reflects a “schizophrenic” system in which policy is “completely different” from administration to administration. He said the establishment of the quota by this administration would “definitely not be good for the stress levels of judges.”

“If they’re going to treat immigration court like traffic court, it’s going to be a travesty,” Goldman said.