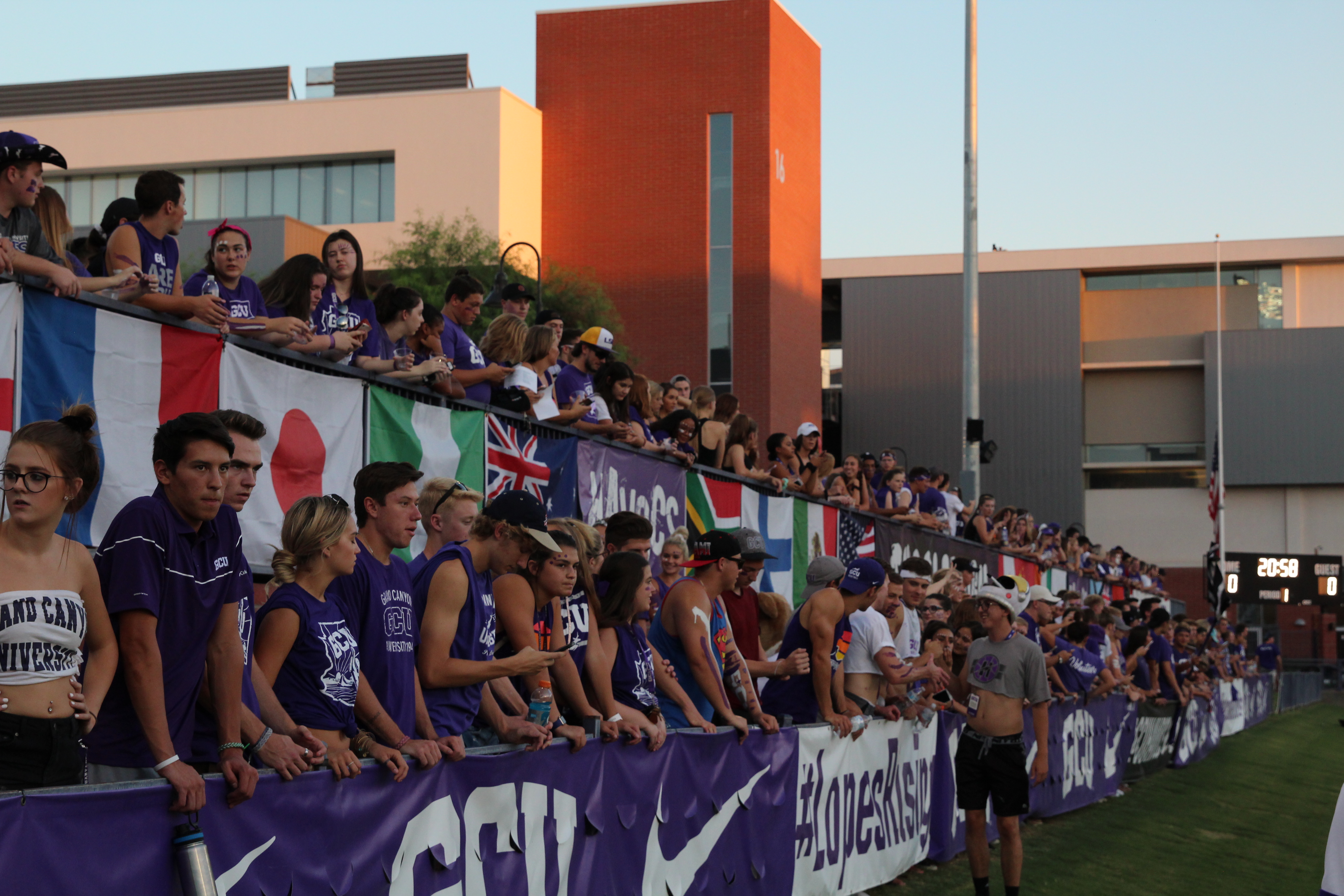 PHOENIX – Grand Canyon University is the definition of a mid-major school. The Lopes, with an on-campus population of about 20,000 students, do not have a football program and the rest of their Division I sports compete in the Western Athletic Conference.

So how does a school with a still-growing athletic profile post some of the most impressive attendance figures for men’s soccer in the country, ranking first among 175 NCAA Division I programs after their first two games of the season?

The answer lies in the school’s student section, the Havocs. The student support group is well known in Arizona, and its reputation is growing nationally.

The Havocs operate more like a family, and it’s a family that has grown significantly in size over the past few years.

“It gets better every year,” said senior Havocs leader Shelby Langston. “Freshman year we started on the practice field, and this year it’s the biggest we’ve ever seen. We beat last year’s student attendance at the first game by 1,500.” 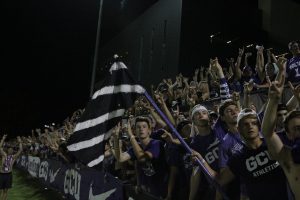 GCU broke the school’s soccer attendance record in its opener against No. 12 Wisconsin, drawing 6,648 fans. It it believed to be the largest crowd ever to attend a college soccer match in Arizona. (Photo by Andre Simms/Cronkite News)

GCU broke the school’s soccer attendance record in its opener, against Wisconsin, drawing 6,648 fans. It was the largest crowd ever to attend a college soccer match in Arizona. The crowd surpassed capacity at 6,000-seat GCU Stadium.

Through two games this season, the Lopes rank first nationally in average attendance, drawing 5,025 fans per game.They are 2-0 with both victories against ranked teams and play Loyola Marymount today.

GCU is known for the raucous crowds at their basketball games, which is where the Havocs built that national reputation. But they make sure that every sport on campus feels the same love.

In their yearly March to the Match, the Havocs first stopped in on a volleyball match on campus. Armed with a band, coordinated chants and hundreds of students, they then paraded through campus like it was the Fourth of July before filling up their half of the field at the soccer stadium.

As the band played its version of “When the Saints Go Marching In,” a flood of GCU purple took over the sideline. With just a few feet separating the throng from the field, the energy was palpable.

Coach Schellas Hyndman, who has coached for four decades and has 487 wins, said GCU has the best environment he’s ever experienced.

“At the collegiate level, there’s no place that I can even compare it to,” Hyndman said. “Even as an opposing coach in some great stadiums, I couldn’t match up to what we see here. John Trask, who coaches Wisconsin said, ‘Wow, you really have something special here. It’s amazing.’”

The Havocs have already propelled GCU to two upsets to start the year. The Lopes took down No. 12 Wisconsin to start their season and beat No. 20 Creighton in their second game, thanks to an 81st-minute winner from sophomore forward Jamie Delor.

The players and fans in the Havocs section know the high-energy crowds are affecting games. 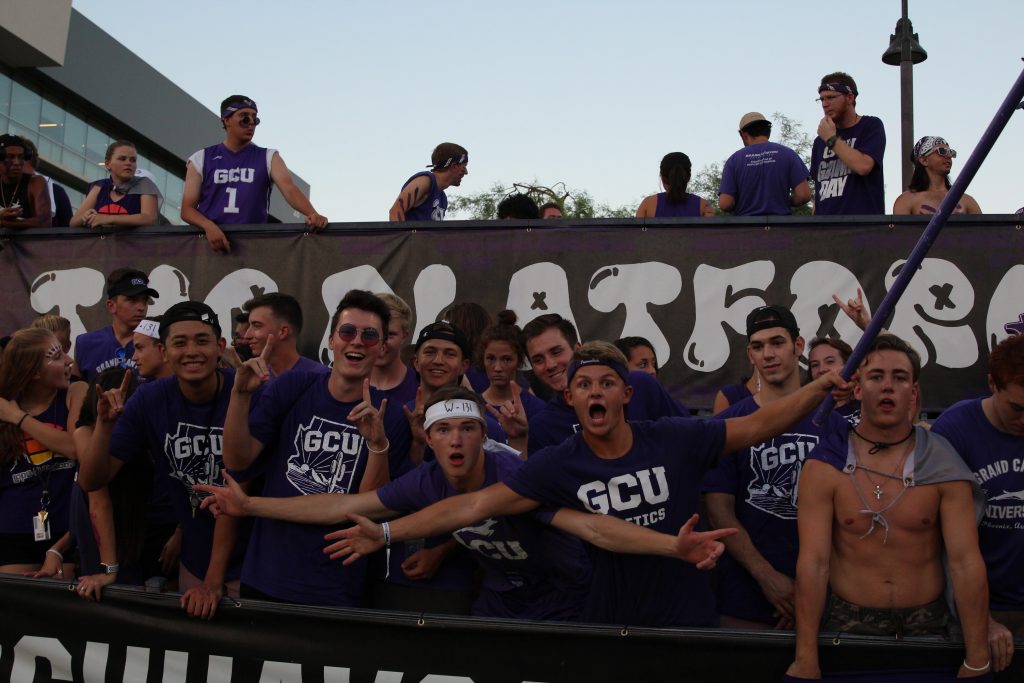 The Havocs fan base made its name at GCU men’s basketball games, but the students have been showing up in force at soccer games as well. (Photo by Andre Simms/Cronkite News)

“They help push us at the end of games when we need the help the most,” redshirt senior Alex Ramirez said. “We need to keep getting good wins and the fans are going to help us do that. Even on Sunday’s (when) homework is due, let’s try to get them out as much as possible because they’re going to help us. And we try to play for them.”

Senior Jake Bradshaw, who has been with the Havocs since his freshman year and now is a group leader, said it’s important for students to feel involved.

“It’s something that (the students) can actually have ownership over,” he said. “They can all show up to a game, have a blast (and) affect that game, and you can change the outcome. Each and every one of them knows that they affect the game, and that’s just a sense of pride.”

The Havocs’ presence creates a positive cycle with GCU athletics. Along with the in-game atmosphere propelling players on the field, the crowds give coaches like Hyndman a recruiting advantage, which in turn helps the very teams the Havocs are supporting. 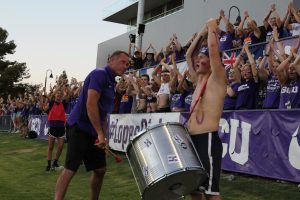 “With some of these international boys that we have, we sent them (video of) our first home game. They see it because they’re unable to make a visit,” Hyndman said. “This past week we had five recruits on campus. Three of them are already committed, so they want to be a part of it.”

What makes the Havocs special is the dedication. Teams that aren’t successful or sports that are less popular often get depleted versions student sections at most schools. That’s not the case for the Havocs.

Soccer, for example, won only seven games in 2016 but still finished among the top 10 nationally in attendance. The Havocs take pride in turning out.

“We really try and let every sport have its supporters,” Langston said. “Students are fans of different sports, and sometimes they learn that they love a sport.

“We just keep trying to make it fun at every game.”