Ben Monterroso, executive director of Mi Familia Vota, said one problem for campaigns is that they don’t know how to make their messages resonate with Latino voters – of any age. (Photo by Vandana Ravikumar/Cronkite News) 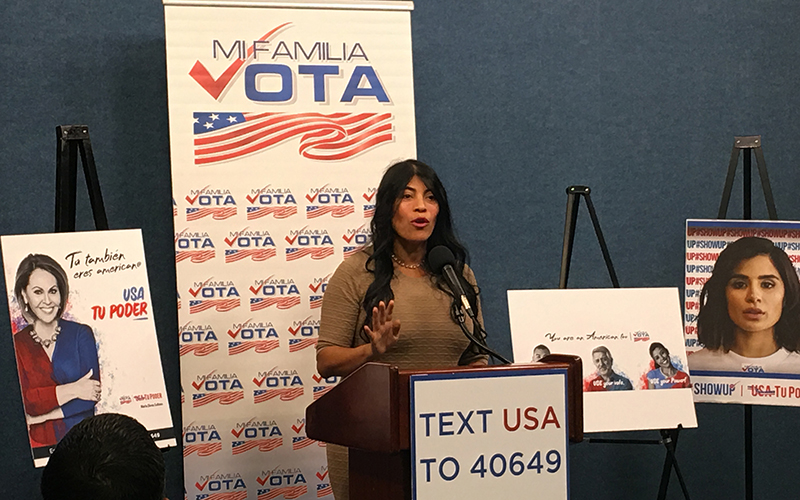 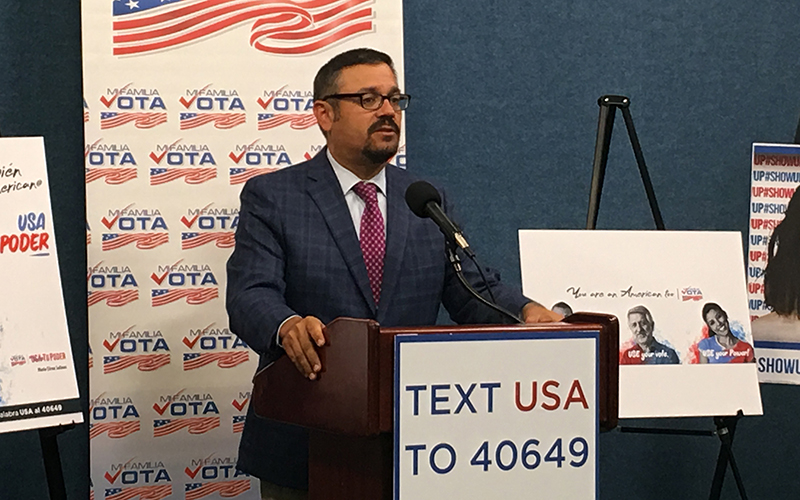 Matt A. Barreto, a UCLA professor and co-founder of Latino Decisions, says the most-effective messages empower Latino voters instead of trying to scare them into taking civic action. (Photo by Vandana Ravikumar/Cronkite News)

WASHINGTON – If you want to boost votership, you go to where the voters are. And in the case of millennials, that’s probably the internet.

So when Mi Familia Vota announced its plan Tuesday to reach millennial Latino voters ahead of November’s elections, it unveiled a campaign heavy on use of social media, text messaging and digital delivery of registration and polling place information.

Some of this messaging in the campaign, USA Tu Poder, includes short videos featuring actress and immigration reform advocate Diane Guerrero, who has nearly 2 million followers on Instagram.

“We are the largest millennial group eligible to vote,” said Ximena Hartsock, cofounder of software company Phone2Action, at the news conference to announce the program. “So it’s no surprise that we’re using technology for this campaign.”

This announcement follows the release last week of an unrelated poll that said 59 percent of Latino voters said they have not been contacted in this election cycle by any campaign or political party asking them to register to vote or cast a ballot in the fall.

That survey, by Latino Decisions and the educational fund of the National Association of Latino Elected and Appointed Officials, said that 85 percent of those contacted were “almost certain” to vote or think they “probably will” vote this fall. And two-thirds said they think it is more important to vote this fall than it was to vote in the midterm elections of 2014.

Advocates said that heightened interest is because of anger among U.S. Latinos over anti-immigrant sentiment, the Trump administration’s separation of undocumented families and a general sense their concerns are not being heard.

Ben Monterroso, executive director of Mi Familia Vota, said that one challenge is that political campaigns don’t know how to make their messages resonate with Latino voters – of any age.

“Often, they don’t know how to talk to the Latino community,” said Monterroso, one of five speakers at Tuesday’s event. “If you notice, the people that are running campaigns often don’t look like us.”

Monterroso, who has worked in Arizona since 2004, said the Latino community is instead spurred to action by uniting on issues that affect it. He noted how Arizona’s SB 1070, the controversial law that let local police check the citizenship status of any suspect they stopped, galvanized younger Latino voters to take political action.

“In 2010, when SB 1070 happened in the state, I noticed that it was a lot of young people crying in front of the Capitol, not knowing what was going to happen to them,” Monterroso said. “Now those young kids are running the campaigns to get out to vote in Arizona. That, to me, is progress.”

He said increased political engagement by Latinos is critical to ensuring that their political interests are heard.

“We know that if the Latinos go out and vote, the politicians are eventually going to be listening to us, because the work that they’re doing depends on our votes,” Monterroso said.

Matt A. Barreto, co-founder of Latino Decisions and a professor at UCLA, said motivating a community from within is important for a group like Mi Familia Vota, that cannot rally voters around a specific candidate. He noted that, among the messages Mi Familia Vota tested for USA Tu Poder, the “community-empowering” ones fared the best.

“That was one of the most inspiring, as opposed to trying to scare people or pressure them. Messages that were community-uplifting were the ones that, in the research, proven to be the most effective,” Barreto said after Tuesday’s event.

Barreto said that greater involvement among Latinos overall is critical to demonstrating their potential influence.

“They still have to make a personal decision on who to vote for, but Mi Familia Vota is just trying to convince people that just by voting, we’re already going to raise our profile,” Barreto said.

But he said that partisan anger is driving at least some voters, particularly in Arizona, which he said is at the forefront of both “the anti-immigrant movement, as well as immigrant mobilizing.”

“The anger is very high in Arizona, there’s no question,” Barreto said. “If you go back to everything since SB 1070, it’s been there.

“2018 is a good test run, because you have a Senate race, you have a governor’s race,” he said. “We’ll see how competitive those are, and a lot of it will be due to the Latino vote.”