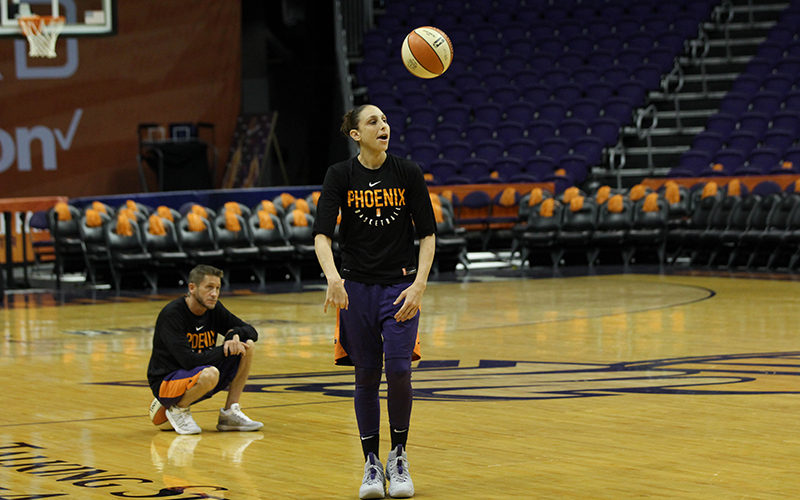 Diana Taurasi prepares to run the offense ahead of Game 3 of the WNBA semifinals. She looks to improve to 14-0 in winner-take-all situations when Phoenix takes on Seattle. (Photo by Kylee Meter/Cronkite News)

PHOENIX – The term “clutch” has no single definition. Fitting, given one of the most broad characteristics in sports has numerous interpretations.

But throughout the WNBA and across basketball as a whole, Diana Taurasi continues to redefine “clutch” and at 36 years old, she shows no signs of slowing down.

“What amazes me about Diana is every time she steps onto the court, she trains probably the hardest of everyone,” coach Sandy Brondello said. “You see her just shooting, it’s always at game speed so she doesn’t do anything half-measures. That’s what makes her special and separates her from others.”

Spanning the course of her career, the Phoenix Mercury guard is near unbeatable facing elimination, sporting a 19-5 mark in those contests. When the scenario shifts to winner-take-all, Taurasi is invincible.

At 13-0 entering tonight’s game in Seattle, her record stands as a precedent for delivering in big moments with consistency while doubling as her entrance into the conversation for the greatest player of all time.

“I just go out there and play. You can’t control the narrative, you can’t control what people say about you,” Taurasi said. “I just like to play basketball.”
Though uneager to accept the greatest of all time title, there is another title that is hard to argue.

Taurasi’s hot streak in winner-take-all games extends well beyond her professional career. After falling in the 2001 Women’s Final Four to Notre Dame, Taurasi and the Connecticut Huskies rattled off 18 consecutive wins in the NCAA Tournament before turning pro. 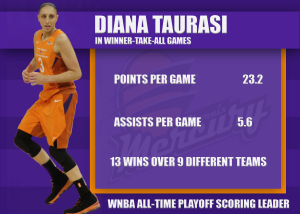 “I just think there’s something about those moments where some players get nervous or scared. Diana does the exact opposite. She gets more confident, more determined and I think what happens is it trickles down to her teammates,” said Seattle Storm guard Sue Bird.

Taurasi and Bird were teammates at Connecticut in 2001, the last time Taurasi was on the losing end in a winner-take-all scenario. To reach 14-0, she’ll now have to get past Bird and the Storm in a decisive fifth semifinal game of the WNBA playoffs.

Having already claimed the title of the WNBA’s all-time leading scorer, Taurasi added to her resume in helping the Mercury become the first team in league history to force Game 5 after trailing two games to none.

Having reached the semifinals in each of the past three years, Phoenix was swept on each occasion. This time, the Mercury recovered. Following a dominant performance in Game 3, Phoenix roared back from a 16-point deficit in Game 4 to deny the Storm their first WNBA Finals berth in eight years.

Generally, playing five games in 10 days would cause fatigue to both teams as a numbers of players spend the offseason playing overseas. However, Taurasi retired from Russian club UMMC Ekaterinburg in December after five seasons to focus on the Mercury.

Brondello credited the rejuvenation of her star player to Taurasi’s premature retirement from UMMC. Against Seattle it might just be the difference.

“How she’s really got here is by not playing overseas. She stopped playing over in Russia in December and spent that next four months getting her body ready. The transformation is amazing,” said Brondello.

Now headed to battle, the Mercury enter Seattle with momentum in their favor and the top general leading the charge.