‘We are a better, stronger country because of him’: Political leaders reflect on Sen. John McCain 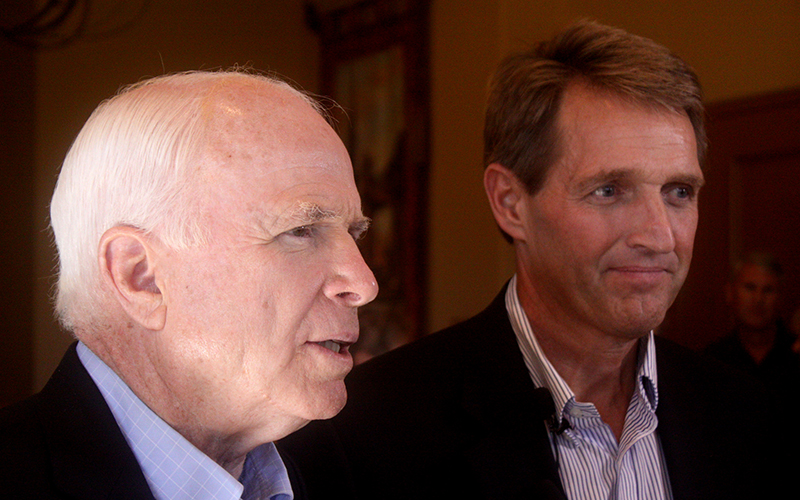 Arizona Sen. Jeff Flake and Sen. John McCain speaking to the media after at a rally in Goodyear in 2002. (Photo by Gage Skidmore/flickr)

PHOENIX – Sen. John McCain, a six-term senator and Vietnam War hero, died Saturday, a little more than a year after being diagnosed with brain cancer and four days before he would have turned 82. U.S., Arizona and world leaders, from the political realm to the sports world, shared condolences and thoughts on McCain’s legacy.

Arizona Sen. Jeff Flake, said in a Washington Post editorial Saturday that for the 30 years he has been in Washington in one capacity or another, there has been McCain and there has been “the other senator from Arizona,” no matter who that person may have been. On Twitter, called his longtime Republican colleague a hero.

Words cannot express the sorrow I feel at John McCain’s passing. The world has lost a hero and a statesman. Cindy and the McCain family have lost a loving husband and father. I have lost a wonderful friend.

I have ordered all flags be lowered to half-staff in honor and remembrance of the incredible life of @SenJohnMcCain. May God rest his soul and look over his entire family. Our state and our nation mourn together. #JohnMcCain #CountryFirst https://t.co/Bj9pgsLIon

My deepest sympathies and respect go out to the family of Senator John McCain. Our hearts and prayers are with you!

Former President Barack Obama, who defeated McCain for the presidency in 2008, issued a statement praising him for a shared commitment to American ideals.

“John McCain and I were members of different generations, came from completely different backgrounds, and competed at the highest level of politics,” Obama said. “But we shared, for all our differences, a fidelity to something higher – the ideals for which generations of Americans and immigrants alike have fought, marched, and sacrificed. We saw our political battles, even, as a privilege, something noble, an opportunity to serve as stewards of those high ideals at home, and to advance them around the world. We saw this country as a place where anything is possible – and citizenship as our patriotic obligation to ensure it forever remains that way.”

Every current Arizona member of Congress also weighed in on the senator’s legacy.

Rep. Andy Biggs, R-Gilbert, tweeted about his history with McCain and offered condolences to his wife, Cindy McCain on the passing of an “iconic leader.”

Cindy and I offer our sincerest condolences to the McCain family on the passing of Senator John McCain, an American war hero. Arizona lost an iconic leader tonight. pic.twitter.com/FEpRqWJoI2

Joyce and I want to share our most sincere condolences and share our prayers with @SenJohnMcCain‘s family. Senator McCain is a true American patriot, who has served the United States and Arizona as a leader and a fighter. All of Arizona mourns the loss of this great man.

Rep. Ruben Gallego, D-Phoenix, said McCain’s lifetime of service, “from Vietnam to the halls of Congress,” and the way he lived “set an example of courage, honor, and love of country that will inspire young Americans for generations to come.” On Twitter, Gallego said the U.S. was “lucky” to have had McCain.

This country was lucky to have Senator McCain. We are a better, stronger country because of him. We will miss him. Fair winds and following seas, sailor.

Rep. Tom O’Halleran, D-Flagstaff, called it an honor to have known McCain for more than two decades.

It has been my deepest honor to have known Senator McCain for nearly 20 years and to have worked with him on issues important to our state and the American people these past two years.

Senator McCain will forever be remembered as a hero. https://t.co/7q7tBdOn1J pic.twitter.com/cNwSFUzlC4

Rep. Paul Gosar, R-Prescott, said McCain will always be remembered for the honorable way he lived.

Senator John McCain led a meaningful and full life. He served his country and his family with honor and respect. He will always be remembered for a life well lived.

Rep. Kyrsten Sinema, D-Phoenix, said in a prepared statement that “Arizona will never be the same” after the death of McCain, which she called a “loss to our great country.”

“You are a statesman, a patriot and our Arizona hero,” Sinema’s statement said. “John McCain’s legacy will continue for generations to come. His commitment to our country, to the pursuit of freedom and truth, and to the values we hold most dear as Americans, have been an inspiration to us all.”

Rep. Martha McSally, R-Tucson, called McCain “an American hero” and said her heart was with the McCain family as “Arizona grieves with them.”

John McCain was one of Arizona’s greatest Senators, one of our country’s finest statesmen, and an American hero who risked his life to defend this great nation. He loved this state, and he loved this country.

#JohnMcCain's life was one of service and sacrifice. I pray for comfort and peace for his family.

Rep. Raul Grijalva, D-Tucson, tweeted that Arizona and the country has lost a man of great conviction.

Today, Arizona and the country lost a strong leader and man of great conviction. Sen. McCain was straightforward, passionate, and dedicated to the values of our country. My thoughts are with the McCain family during this difficult time. 1/2

Grijalva said in a telephone interview that McCain’s death was “a huge loss for the state of Arizona, for the nation, and a much more personal, bigger loss for his family.”

“He’s a man that stood on principle, if you agreed or disagreed with him he didn’t back off, talked straight to people, and has served this country from the military to his days here as a leader in the Senate,” said Grijalva, noting that McCain was not afraid to stand up to presidents or party.

“We worked together, we disagreed, it was never personal, and the friendships continued,” Grijalva said. “I think that kind of a comportment by an elected official and a public figure in this country is something that this country needs very badly and it’s a loss, it’s an irreplaceable loss.”

Jim Kolbe, a Republican who represented the Tucson area in the House for 11 terms, was elected two years after McCain and served for another two decades in Congress with him.

“We lost a great friend, a great statesman, a great American patriot. His was a life of public service and he’s done great things,” Kolbe said in an interview Saturday. “He will be missed most of all by his family and friends, but by the country at large. He will be greatly missed.”

Maricopa County Supervisor called it “a sad day for Arizona.”

“In Senator John McCain, we had a principled fighter whose chief allegiance was to human decency, not party or popularity,” Gallardo said. “He championed comprehensive immigration reform, spoke out against torture and other human rights abuses, and fought to get money out of politics. His leadership will be missed, not just in Arizona but across the nation.”

In Washington, Senate Minority Leader Chuck Schumer, another Democrat who praised McCain’s willingness to work across party lines, said the “Senate, the United States and the world are lesser places” after McCain’s death.

As you go through life, you meet few truly great people. John McCain was one of them. His dedication to his country and the military were unsurpassed, and maybe most of all, he was a truth teller – never afraid to speak truth to power in an era where that has become all too rare.

Schumer said he plans to introduce a resolution to rename the Russell Senate Office Building, the oldest of the office buildings, where McCain had his office, in honor of the late Arizona senator.

Attorney General Jeff Sessions served 20 years in the Senate with McCain and said he watched as McCain’s “presidential aspirations were entirely set aside” to support what was at the time an unpopular position to support President George W. Bush’s military surge in Iraq.

“For John McCain, his country was his life. He was tireless in its service. Courage, determination, and relentless drive made him a great leader,” Sessions said in a statement released by the Justice Department. “His ferocious tenacity for his country was unmatched. America has lost one of its greatest patriots.”