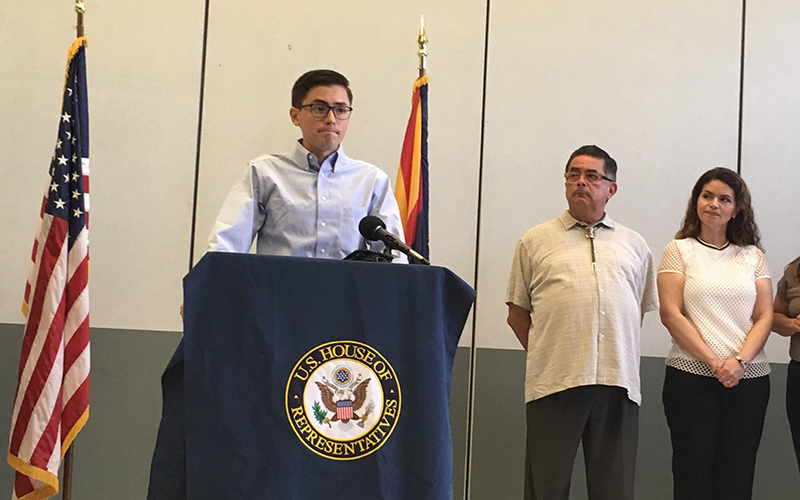 Bill de la Rosa, who fought back tears at a news conference Thursday, told reporters his ailing father was still alive only because he hopes to see his wife, who was deported in 2009, one last time. (Photo by Chris McCrory/Cronkite News)

TUCSON – The Department of Homeland Security on Friday reversed itself and said a Mexican wife and mother would be allowed into the U.S. on a 30-day “humanitarian parole” to visit her terminally ill husband here before he dies.

The change was announced by Rep. Raul Grijalva, D-Tucson, on Friday – one day after he held a news conference with the family in an attempt to bring pressure on Homeland Security Secretary Kirstjen Nielsen. Grijalva said “compassion and hunmanity has prevailed” in the decision to grant the visit to Gloria Arellano Montoya.

Arellano Montoya was deported in 2009 after overstaying her visa and prohibited from re-entering the U.S. for 10 years. When her husband, Arsenio de la Rosa, a U.S. citizen, had a stroke in 2011, she was granted entry for 10 days to care for him and their four children, who also are citizens. The oldest, Jim de la Rosa, is a Marine Corps veteran who served in Afghanistan.

When de la Rosa, 85, had another stroke in early August, doctors said he only had a few weeks to live. Arellano Montoya – who has no criminal record, Grijalva said – again applied for humanitarian parole, but her application was rejected Aug. 21.

“We’re not asking for her status to be legalized,” her son, Bill de la Rosa, said at the Thursday news conference, fighting back tears. “Just a temporary pass for her to come back to the U.S. Five days, three days, one day, one hour. Just for her to see my dad, and for my dad to see her.”

He believes his father is holding on to life in the hopes he’ll see his wife again. 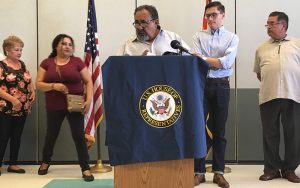 “I think that he wants to see my mom, one last time before he finally lets go,” the son said. “There’s no reason she should be denied another parole, especially in these circumstances.”

Grijalva said Arellano Montoya’s case, although tragic, is not unique.

“It happens all the time. It’s just that in this particular case, it just struck many of us as particularly harsh and hard-hearted and cruel,” he said after the Thursday news conference. “I just think that the rhetoric around immigration and how it’s heightening as we go through towards the election has made the local officials feel like they had to mimic that rhetoric.”

In a letter to Nielsen on Wednesday, Grijalva pleaded on Arellano Montoya’s behalf, laying out the case for overturning the rejection and allowing her a humanitarian parole.

“The letter to Nielsen is saying, ‘You have the authority to overrule this. Would you please show one glimmer of humanitarian gesture and allow this for five days, three days, whatever?'” he said Thursday. “Let (her) come and be with their family and see her husband for possibly the last time.”

By Friday, he had his answer, announcing that the acting director of the Tucson Office of Field Operations, Guadalupe Ramírez, had granted Arellano Montoya the 30-day parole.

“I thank the family for their strength and unwavering spirit during such a difficult and personal time,” his announcement said. “The outpouring of support and prayers by the people of Arizona and the country helped elevate this urgent matter. Without the voices of thousands, reuniting this family would not have been possible.”