PHOENIX – The lights dim, halting the sound of clinking glasses. A spotlight pierces the darkness as whispers bounce around Club Hippo in Baltimore, then collide with a familiar voice.

Aretha Franklin’s “Respect” fills the room as a statuesque woman with golden curls and a high-beam smile appears in the spotlight.

In a sequined skater dress that scatters the light, Lucy Starr, Club Hippo’s resident drag queen, steps forward and isn’t afraid to display all that she is.

But getting there in the first place wasn’t easy for Starr.

From loneliness and frustration to struggling to gain his father’s acceptance, Dutzer grew into a strong-minded individual who wants to give back to his community.

In 2016, he bought the nation’s foremost female-impersonator pageant, Miss Gay America, which he hopes will become a second family for the LGBTQ community and empower young people to be themselves, unashamed of who they are. 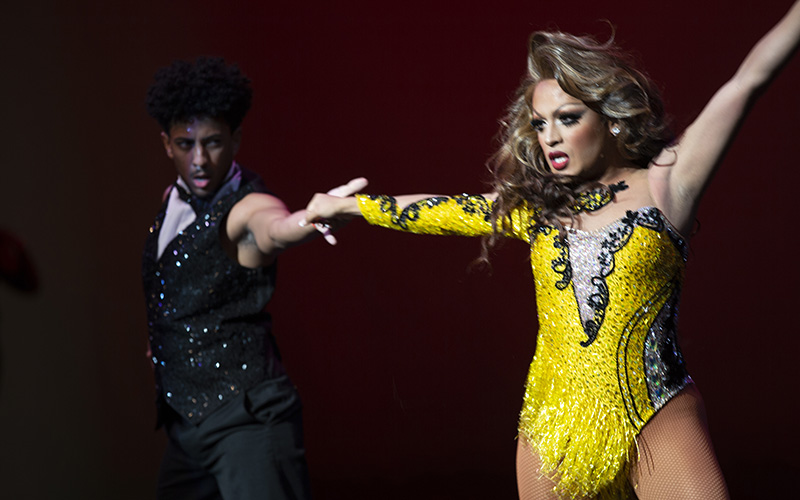 Arizona has an estimated 45,550 LGBTQ youth, with a rate of acceptance that’s slightly below the national average, according to a 2018 report by the Williams Institute at UCLA School of Law.

LGBTQ youth ranked rejection by their families as the most difficult problem in their lives, which can increase the likelihood of dropping out of school, becoming unemployed, living on the streets, committing suicide or abusing drugs, the report said.

Dutzer said a network of support for gay, lesbian and transgender kids is crucial because it’s terrifying to come out and be rejected by loved ones.

Born and raised in a small town in the Pocono Mountains of north-central Pennsylvania, Dutzer attended Catholic school, where he faced a series of challenges not only with the people around him, but with himself.

“It was a big football school in the middle of farm country, so you know growing up gay there you kind of felt out of place in a lot of ways,” Dutzer recalled. “Everyone wanted you to play football, and I never wanted to play football. I kind of wanted to be a cheerleader.”

“I was always 6-foot-3 in school and kind of on the huskier side, so you would get bullied around for being a little more feminine.”

Being the only guy in his school who wanted to be on the cheer squad, Dutzer said his peers often made derogatory comments about his sexuality in hopes of tearing him down.

Dutzer was left to his own thoughts most of the time.

“If I was bullied, dating somebody, had a crush or fell in love, I couldn’t share that with anybody,” he said. “I didn’t really have any friends that were gay or that knew I was gay, so whenever I experienced pain, I had to learn how to deal with it on my own.”

Dutzer’s family didn’t know he was gay until they found out on national television. He took part in the Capital Pride parade in Washington, D.C., in the 1980s and was interviewed by a reporter from CNN.

“Not thinking my parents watch CNN or anything, I made news,” he said.

Dutzer’s family initially wasn’t supportive of his sexuality. He said his mother shed a lot of tears, especially because the AIDS epidemic was starting to grow. His mother feared for his health, but she eventually came around.

Gaining his father’s support was another matter, made more difficult because they weren’t close and shared no common interests.

“I think my dad was embarrassed; he never really told people that I was gay,” Dutzer said. “We were growing up in a small town, and it’s one of those things where straight guys just don’t talk about gay people.

“He worked a lot and we took different interests. He was big into sports, and I was more into ice skating and cheerleading.”

As time went on, he knew his father wasn’t going to change. Dutzer never wanted to be anyone different or wished he weren’t gay, he just wanted to be accepted.

The beginning of Lucy Starr

Despite his struggles, Dutzer became strong mentally and emotionally. He began to promote local pageants in Baltimore, ran a pediatric dental business with his husband and dabbled in the art of drag as a means of self-expression.

One of his best friends encouraged him to try drag and showed him the ins and outs of painting his face and making costumes. 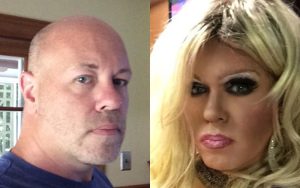 “It was a surreal moment, it was fun,” Michael Dutzer said, referring to his debut as Lucy Starr at a bar in downtown Baltimore. “All of a sudden you’re the big blond girl who’s bigger than life.” (Photo courtesy of Michael Anthony Dutzer)

As soon as Dutzer had his look together, he was asked to perform at a friend’s local shows in a bar in downtown Baltimore.

“Everybody from work came to see me,” he said, “and it was kind of one of those nerve-wracking moments.”

But the evening was empowering.

“The first time you walk out and you’re like 7½ feet tall in a dress, all of a sudden you’re the big blond girl who’s bigger than life.”

It was a surreal moment for Dutzer. He liked the idea that whether people were laughing at him or with him, he was able to take people away from their problems for a bit.

As time went on, a friend asked Dutzer to sponsor them in Miss Gay America, which eventually led to Dutzer buying the whole pageant.

Dutzer considers the pageant an opportunity to provide a sense of hope for people. It was never about gaining money for himself but to help people and become community driven.

Dutzer said LGBTQ celebrities have a responsibility as role models because too many families reject young people because of their sexuality.

“I think it is important to have a network of people to support kids because it (coming out to their family) is a scary thing,” he said. “We are trying to make sure that people know that their lives are valuable, to make a difference in their eyes.”

Many contestants in the Miss Gay America pageant strive to positively impact the lives of young people. For example, Miss Gay Arizona America 2015, Karrington Valenzuela, also known as Nevaeh McKenzie, is no stranger to fundraising for such community organizations as One in Ten, which is dedicated to serving and assisting LGBTQ youth.

One in Ten often gets a help from local LGBTQ celebrities and MGA drag queens, said Sarah Kent, program specialist for the organization. Last year, they raised $76,000 for One in Ten programs by hosting the annual Dancing for One in Ten.

In 2017, Dutzer and his husband, Rob Mansman, established the MGA Excellence Foundation, a charitable organization to help One in Ten and other LGBTQ youth centers mentor young people and provide social-development resources.

For example, she said, bingo with a drag queen takes something fun from childhood and pairs it with something that isn’t so familiar to the general public.

“For the first time, people will be playing bingo and be in the presence of a really beautiful drag queen and think, ‘Oh my gosh, I had no idea this was so fun,'” Kent said.

Despite the stereotype of drag queens being sassy or catty, Kent said, they’re “lovely” role models and do so much for young people.

“Everybody is a person, and if you meet one drag queen, you certainly haven’t met them all,” she said.