TEMPE – Todd Graham was tasked with a difficult challenge when Arizona State hired him to coach football in 2012: Ignite a dormant donor base.

When he walked into the ASU football facility on his first day on the job, he found 14-year-old carpet and horse troughs for ice baths in a badly outdated building.

“I went, like, ‘Wow!’ I was shocked at how poor of a teaching facility we had,” Graham said. “We were behind just in video, just in teaching. Nutritionally, we were probably dead last (in the Pac-12). Budget-wise, dead last.

“People wondered why (the Sun Devils) weren’t winning. There was just no investment.”

He set out to engage boosters and spearhead an effort to upgrade the facilities, but even Graham, who was fired last December, couldn’t have imagined where it would lead. With input from new boosters and greater commitment from previous donors, ASU is turning Sun Devil Stadium into more than a renovation project.

ASU 365 Community Union, the brainchild of private-equity investor Jack Furst, who graduated from ASU in 1981, is designed to transform the stadium into a place that students, faculty and staff members and the community can utilize year around with a wide range of options, from movies to farmer’s markets to cardio classes.

“I said, ‘Look, this is crazy.’ There’s no sense to refurbish a stadium when we ought to reinvent it,” Furst said. “It ought to be a place where we get together 365 days a year instead of eight football games.

Furst foresees digital-expression walls that show what goes on at ASU “all the time,” bands in every corner of the building, a giant Starbucks with Wi-Fi, films at the “best outdoor movie theater in the world,” concerts, runners jogging around the main concourse and a “Freshman 101” class outside that uses the stadium’s giant video board to introduce students “to all things ASU.”

Pilot events will include small concerts on the field, business and corporate events – such as cocktail mixers and receptions – on the stadium’s upper concourse and yoga events on a sun deck, said Victor Hamburger, general manager of the 365 Community Union.

A series of concerts in October already has been booked.

When Graham came aboard, a disconnect existed between many boosters and the football program, in part because of off-field issues and a poor academic record for players.

In 2011, the year before Graham took over, the ASU football team had a team grade-point average of 2.2 and was creeping close to losing scholarships because of it’s poor Academic Progress Rate, according to Sun Devil Source’s Chris Karpman. Many boosters were reluctant to give money to the program.

Graham was determined to instill a new culture in Tempe and sell supporters on it, too. He believed activating donors would begin with building relationships.

To do so Graham said, he made his program transparent to those who wanted to help. He gave boosters unprecedented access. Many were regulars at practice. Some gave talks to the team. He even gave a few of them headsets to wear on the sidelines during games, so they could listen in to exchanges like those between Graham and quarterback Taylor Kelly.

“Our donors saw what type of young men we were developing and how we were building them and teaching them to live a championship life,” Graham said. “I think that’s what activated them. I had nothing to hide – I was so proud of the young men and what we were accomplishing.”

Graham needed to an infusion of donors quickly so that ASU could begin the task of making Sun Devil Stadium a state-of-the-art facility again. When the construction began in April 2014, ASU estimated a price tag of $225 million for the project, according to azcentral.com.

Even with cranes and bulldozers working in and around Sun Devil Stadium, the project still didn’t include what Graham wanted and needed most: a new student-athlete facility.

About five months later, the Arizona Board of Regents approved a $256-million renovation plan that included funds for a Graham’s dream student-athlete facility. The plan called for a fund-raising effort to supply $85 million toward the project, according to azcentral.com. 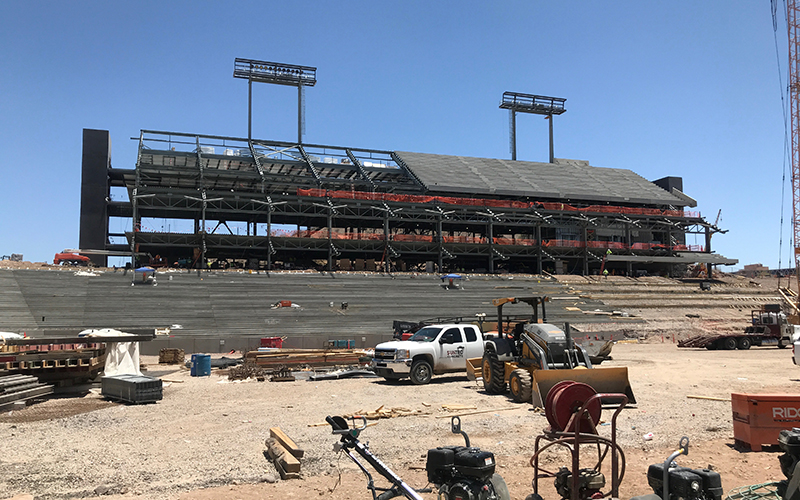 Graham was introduced to Furst by Tom Gardner, a Sun Angel-level member of the Sun Devil Club (donors who provide gifts of more than $50,000 to the university).

“I think it was not until a year later with him just being around the program – I invited him in. I opened the doors,” Graham said.

He did the same for many significant donors including Bill Kent, Joe Cosgrove, Steve Butterfield – who passed away in April.

“I fell in love with what he was doing with our players in terms of what we were doing in the classroom, how competitive we were in the classroom,” said Furst, who added that he liked Graham’s philosophy about college football “being part of a community and being a good citizen.”

Furst became involved with the stadium renovation, but his vision for the project went far beyond what was laid out initially. He wanted to see the stadium transform into a “community union” instead of just a football stadium.

Graham wasn’t shooting for the stars at that time. He just wanted a first-class student-athlete facility.

“Jack was kind of talking about this community center and his vision for 365,” Graham said. “And I was kind of like, ‘Hey man, I just want to get us to par.’ ”

Furst replied: ” ‘You know what? We’re Arizona State. We can do both.’ And that’s what we did.”

Furst was the spark plug for a lot of the giving, helping ignite excitement and generate donations with his passion for the project.

“I think what gives Jack – and Debra, his lovely wife – joy in giving back is that they can help lead their colleagues and friends in this kind of effort,” Anderson said in a video honoring Furst with ASU’s 2017 Philanthropist of the Year Award.

Graham had gained a financial commitment from the donors but, in a bit of a role-reversal, they wanted one from him. Graham had bolted to Tempe after just one year with the University of Pittsburgh, and donors wanted to make sure he wouldn’t do the same to ASU.

They wanted Graham to get financially involved in the project. So he did. He and his wife, Penni, committed $500,000 to the project, a donation that was matched by Anderson shortly after.

Graham embraced Furst’s vision. He wasn’t concerned with people messing up the field or hanging around the Devils’ facilities. He said he understood the advantages 365 would bring to the Sun Devil community, as well as the leg up it would give ASU in recruiting.

Graham said he knew that when he brought recruits to the ASU campus, they were going to see a state-of-the-art stadium complex incorporated into the community that would be different from anything in the Pac-12 or around the country.

“And then it just started building from there,” he said.

Isaac Manning, manager of the Sun Devil Stadium renovation project, said that a 365 team has been working for the past three years with ASU’s Herberger Institute for Design and the Arts on ideas for the project and how to implement them.

Each year, the Herberger Institute holds a Cluster Project, a competition that allows students to collaborate to solve real-world design projects. ASU 365 is one of the projects, and Manning and Furst told the students that they will eventually benefit from the project they’ve designed.

According to Manning, Furst asked them, “How many of of you guys have been to a football game?”

Hamburger, general manager of the 365 Community Union, said Furst’s plan made a lot of people wonder why the stadium wasn’t already being used for more than just football games and other events.

The project, though, would require a change in how the facility is managed. Instead of trying to implement all their ideas at one time, Furst said, Crow came up with the term “Lego into it,” a reference to the plastic building blocks.

“We’ll get started and if it’s real successful, we’ll do the next piece, and (then) the next piece to manage the risk of (whether we) can we operate a community union that’s open 365 days a year,” Furst said. “We can literally stage our way into ultimate success.”

Furst is eager for the project to “move away from bricks and mortar” and get to the point where planning begins on all the possible activities that can take place at Sun Devil Stadium. Hamburger says the project will begin pilot events in fall 2019.

The stadium’s amenities are meant for yearlong use. As part of a budget that has ballooned to $307 million and was approved in September 2017, an indoor fourth-level for corporate and student activities was added to the construction plans, according to azcentral.com.

Manning said Crow thinks of the 365 Community Union as a lab space, one that could be used as a sociology lab or a crowd-control lab.

“Now, when you go and talk to the deans of the 16 colleges,” Manning said, “they are all going, ‘Well, this is pretty interesting. We’d love to have access to the building and start doing things.’ ”

Anderson said, “(He) wants the reinvention of this stadium. (He) wants this venue to belong to all of ASU, all of the community, for purposes way beyond just seven or eight football games a year.” 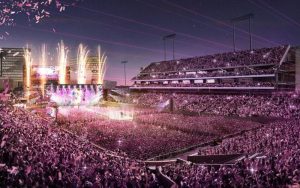 Because the building is “vertically segregated,” Manning said, it allows for a range of multifunctional spaces. A dinner event can be held on the 300-level of the east sideline for more than 500 people while others are walking along the main concourse.

Manning – who was part of a group that designed the Dallas Mavericks’ basketball arena, American Airlines Arena – wants Sun Devil Stadium to become a porous part of ASU’s campus.

On American Airlines Arena, planners never were able to draw a security line that would allow for accessible restaurants inside the stadium, he said, but Sun Devil Stadium will be open from 6 or 7 a.m. until as late as midnight. For security, Manning wants the building “fully loaded” with people at all times.

“People don’t like to go places where there aren’t people,” he said. “You feel safe at the (Memorial Union) all the time because there’s always someone running around that building all hours of the day and night.”

Furst, Manning and Hamburger were not egocentric about their ideas. The trio understands that they’ve only scratched the surface of the creative ways to use the stadium. The consumers and visitors will dictate what the group expands upon and ultimately adds.

“We don’t know where it ends,” Hamburger said.