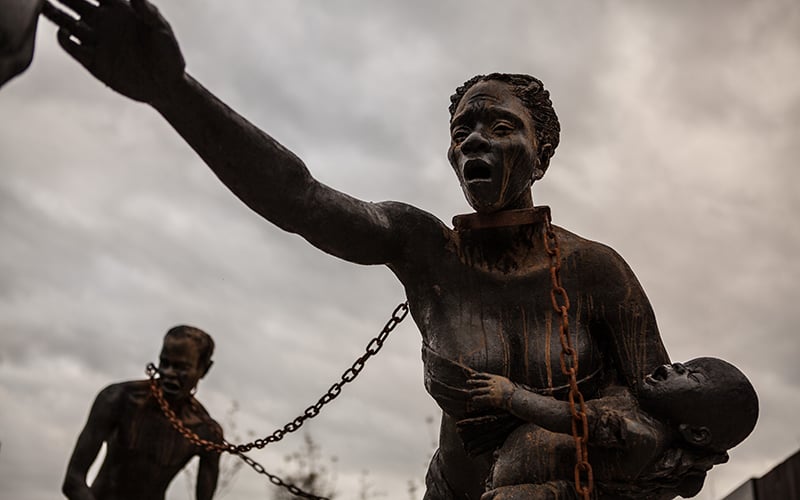 “Nkyinkim,” by Kwame Akoto-Bamfo, is a sculpture at the National Memorial for Peace and Justice in Montgomery, Alabama. (Photo courtesy of Equal Justice Institute)

PHOENIX – More than 4,000 African-Americans were lynched during the “lynching era,” from the end of Reconstruction in 1877 to about 1950.

Eighty-eight percent of the lynchings occurred across 10 Southern states, according to “Lynching in America,” a 2017 report by the Equal Justice Initiative, a legal advocacy group in Montgomery, Alabama.

The lynching era’s legacy can still be seen today, historians and politicians say. Three black senators in June introduced legislation to make lynchings a federal crime, calling it long past due. The bill has not yet had a hearing.

Stewart Tolnay, a sociology professor at University of Washington, said states with the most lynchings now have higher homicide rates, increased imprisonments, more church burnings and a greater number of death penalty sentences.

During the lynching era, said E.M. Beck, a sociology professor at University of Georgia, anger over the Civil War and Reconstruction, competition for jobs and a rise of African-Americans as public figures led to increased violence against African-Americans.

“There was a rise in white supremacy to the point where whites did not view blacks as human, and also a generalized, widespread understanding that mob violence was necessary because of recent history,” Beck said.

African-American men were lynched for standing up against oppression, speaking to white women and committing minor social transgressions, according to “Lynching in America.” Of the lynchings recorded, 25 percent of the victims had been accused of sexually assaulting a white woman, and 30 percent were accused of murder.

Lynchings became public spectacles, as hundreds and even thousands of people would gather to watch, Beck and Tolnay both said. Local newspapers would advertise the events, and food and drink carts would serve the crowd as African-American men were tortured for hours before finally being killed.

“There was actually no anti-lynching legislation in place federally,” Tolnay said. “So the federal government, which was against lynchings for the most part, could not step in to stop them.”

Many anti-lynching bills were proposed in the early 20th century, including the Dyer Anti-Lynching Bill of 1918, which passed the House of Representatives but was halted by a series of filibusters by Southern senators. The federal government did not apologize for the lack of anti-lynching legislation until 2005, but Sens. Tim Scott, R-S.C.; Kamala Harris, D-Calif.; and Cory Booker, D-N.J., are pushing for the “Justice for Victims of Lynching Act of 2018.” 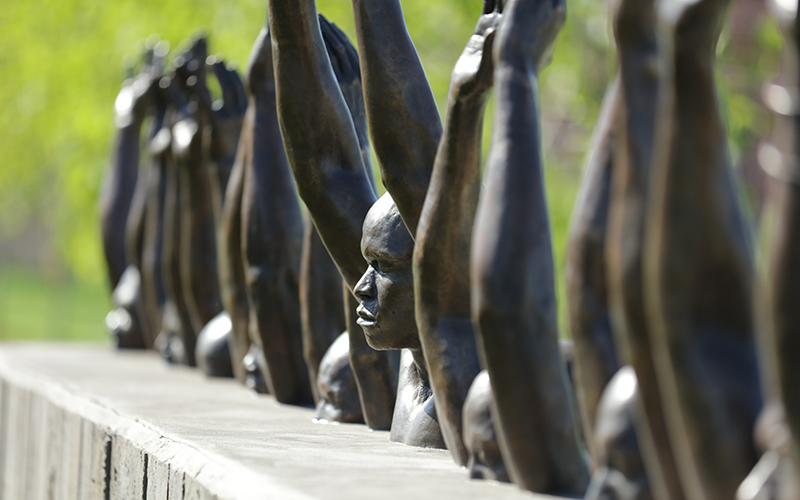 The Hank Willis Thomas scultpture “Audra Melton Raise Up” is on the grounds of the National Memorial of Peace and Justice in Montgomery, Alabama. (Photo courtesy of Equal Justice Initiative)

“Lynching is a dark, despicable part of our history, and we must acknowledge that, lest we repeat it,” Harris said in a news release. “From 1882 to 1986 there have been 200 attempts that have failed to get Congress to pass federal anti-lynching legislation, it’s time for that to change.”

Jim Loewen, author of “Sundown Towns,” a book about American towns that refused to allow African-Americans to live in their communities, said African-Americans migrated to high-populated urban areas after the start of the lynching era.

Detroit and Cleveland, Ohio, saw a 42.5 percent and 36.8 percent increase in African-American population between 1910 and 1970, respectively, according to the lynching report. Jacksonville, Florida, saw a decrease of 28.5 percent.

This caused the competition for jobs to increase between the recently migrated African-Americans and the local white people, Loewen said. This angered some white Northerners, creating racial bias nearly as bad as some areas in the South.

“This wasn’t, and isn’t, just a Southern problem,” Loewen said.

Lynchings made their way to the North after the migration of African-Americans to urban cities, according to the report. A total of 89 lynchings were reported in Indiana, Illinois and Ohio during the lynching era.

Arizona was not among the states listed in the Equal Justice Initiative report, but the state does have a history of lynching. In the states such as Arizona, California, New Mexico and Texas, lynch mobs frequently targeted Mexicans, who were only second to African-Americans in the “scale and scope” of lynching in America, according to two history professors who wrote an article for The New York Times.

“From 1848 to 1928, mobs murdered thousands of Mexicans, though surviving records allowed us to clearly document only about 547 cases,” they wrote.

The authors point out that historians often highlight the racial violence in the South, but “the story of mob violence against Mexicans in the Southwest compels us to rethink the history of lynching.”

Hate crimes against African-Americans are still occurring across the country, but they are most prominent in the Southern states and densely populated urban areas, according to the 2016 FBI hate crime statistics.
The number of reported lynchings decreased in the 1940s, and lynchings that did occur were less public and more private because of a more progressive society, according to the lynching report.

“Our nation’s history of racial injustice casts a shadow across the American landscape,” Stevenson said. “This shadow cannot be lifted until we shine the light of truth on the destructive violence that shaped our nation, traumatized people of color and compromised our commitment to the rule of law and to equal justice.”