Fitzgerald, entering his 15th season with the team, was at Dominick’s on a Wednesday night promoting his 10th annual Fitz’s Supper Club fundraiser, which will be held in late August at the steak house.

Fitzgerald’s involvement in the community and around the country started with his First Down Fund, established in 2005. The charity’s two priorities, according to Fitzgerald’s website, is to “promote reading proficiency and technology” for children and “support events to prevent and cure breast cancer.” 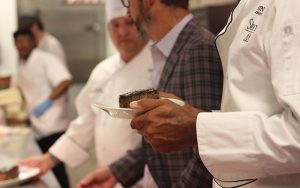 Fitz’s Supper Club is celebrating its 10th year. The fundraiser will be held Aug. 27 at Dominick’s Steakhouse. (Photo by Margaret Naczek/Cronkite News)

“There’s nobody better to do it. Nobody gives back like Larry,” said Oliver Badgio, chief brand officer of Prime Steak Concepts, which owns Dominick’s and Steak 44 in Phoenix. He has been involved with Fitz’s Supper Club for five years.

Fitzgerald’s charity work stems from his late mother’s involvement in the community.

“When we were young,” he said, “my brother and I would see her doing it and want to be a part of it, so I promised myself once I had the platform and the ability to help, I was going to go full speed ahead and do it and, thank God, I’ve been able to do it so far.”

Fitzgerald, 34, who was born in Minneapolis, continues to give back to his hometown even though he lives 1,600 miles away. His late grandfather, Dr. Robert Johnson, founded the Plano Child Development Center in Minnesota, to which Fitzgerald donates annually.

And he’s a constant presence and active member of the Arizona community.

“He’s an amazing person both on and off the field,” said Adam Richman, the Arizona Cardinals community-relations director. “He does a lot in the community that nobody knows about. … He touches a lot of people.” 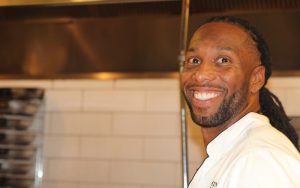 Larry Fitzgerald said his charity work stems from his mother’s spirit of giving when he was growing up in Minneapolis. (Photo by Margaret Naczek/Cronkite News)

Fitzgerald believes he has a responsibility to give back. Referencing other athletes, such as LeBron James and the public school he started in Akron, Ohio, he said true greatness is to use the time and resources professional athletes are blessed with to help the less fortunate.

“The things that we’ve been able to do have been magnificent,” Fitzgerald said. “Just giving kids technology and helping women with their mammograms and early detection of breast cancer. That’s where we are, and that’s where are scope of focus is.”

Despite his attention on the football field, with 1,234 receptions, 110 touchdowns and 15,545 yards in his 14 years with the Cardinals, Fitzgerald’s does not seek renown for his charity work.

Of the many events that Fitzgerald is involved in, he said his most memorable moments are those where he can help children in the community.

“When you go to school and you see kids working on some of the things that you have helped put in the school for them. It just really melts your heart to know that’s being utilized,” Fitzgerald said. “It just makes you feel like what you’re doing is not in vain. It’s for a worthy cause.”

The 10th annual Fitz’s Supper Club will be held Aug. 27 at Dominick’s Steakhouse in the Scottsdale Quarter.