SCOTTSDALE – With the Discovery Channel airing the 30th incarnation of its popular Shark Week television event this week, interest in the predator is high. The shows attract millions of viewers, and their popularity has led to multiple Sharknado movies and shark-themed items in popular video games.

Businesses in Arizona are capitalizing on the shark craze, too. OdySea Aquarium, on the Salt River Pima-Maricopa Reservation near Scottsdale, has been filling its July calendar with a variety of shark-related events. Fifty sharks of 14 species live in the aquarium’s tanks, nearly half of them in the biggest tank, called Shark Waters.

But what goes into taking care of so many of these carnivorous creatures? The answer lies behind the scenes: advanced filtration systems, lots of raw fish and a dedicated team of employees, some of whom dive with the sharks on a regular basis. 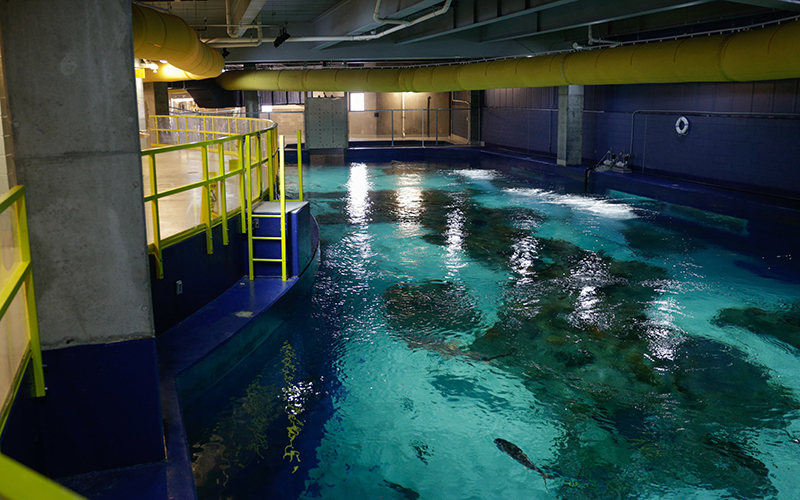 OdySea Aquarium has dozens of exhibits of various sizes, but Shark Waters is the largest at 450,000 gallons. It holds about 25 sharks and a wide variety of fish, said Dave Peranteau, director of animal care and conservation at OdySea. Employees monitor the animals 24/7, Peranteau said, and a full-time veterinarian is on staff. 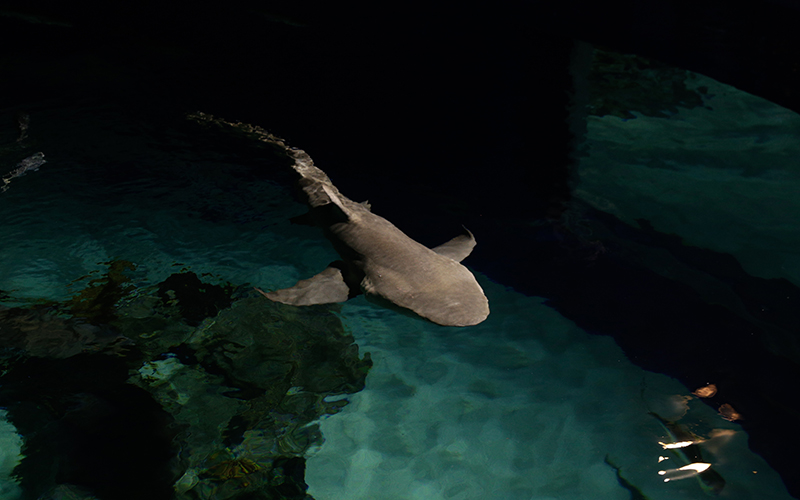 Visitors most often view the sharks from below the waterline, but OdySea employees get a different look. Because of their topless design, many of the aquarium’s large tanks can be easily accessed from the second floor of the 200,000-square-foot aquarium. 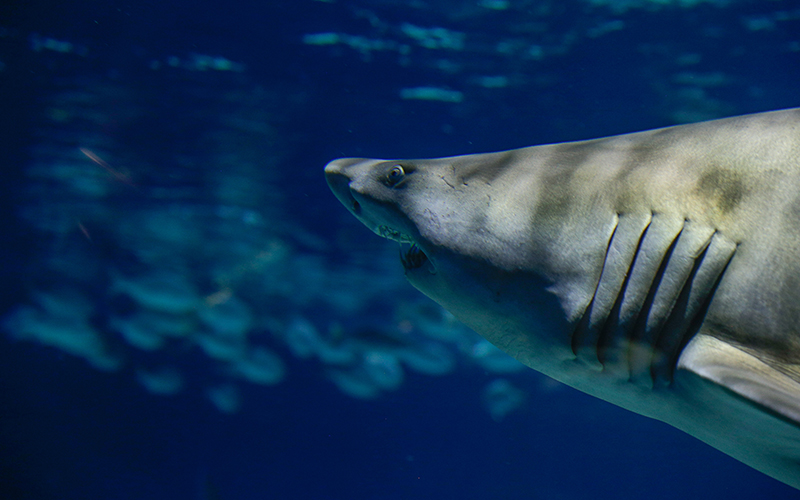 Sand tiger sharks are some of the largest sharks at OdySea, and can grow up to 10.5 feet in length. Their inward-angled teeth help the shark prevent its prey from escaping. Other species at OdySea include nurse sharks and whitetip reef sharks. 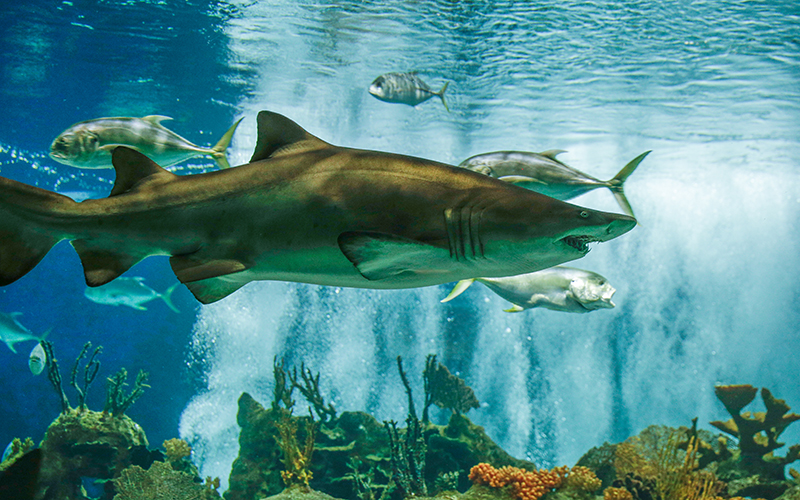 Caring for sharks isn’t a job for the impatient, Peter Santoro said. “You’ve got to have a cool temper. You don’t know what they’re going to do,” he said. 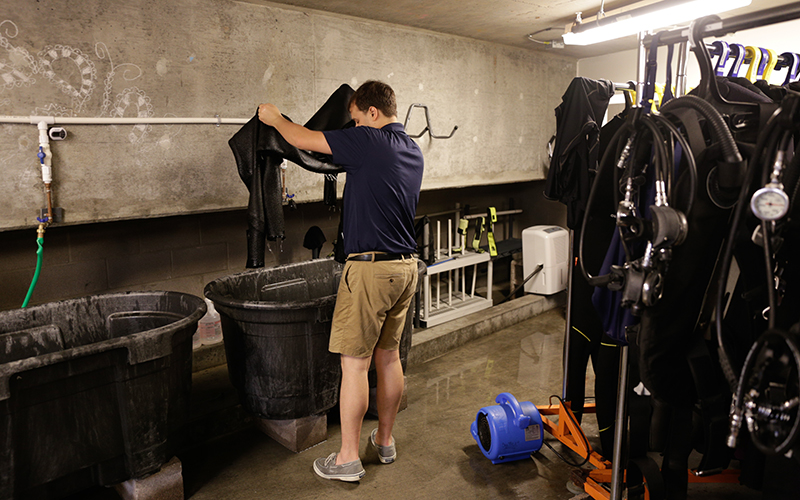 Christopher Andree rinses saltwater from his wetsuit after a dive. Although OdySea’s filtration system leaves the tanks relatively clean, divers are needed to remove algae and maintain the tanks. The staff at OdySea collectively performs nearly 60 dives per week. 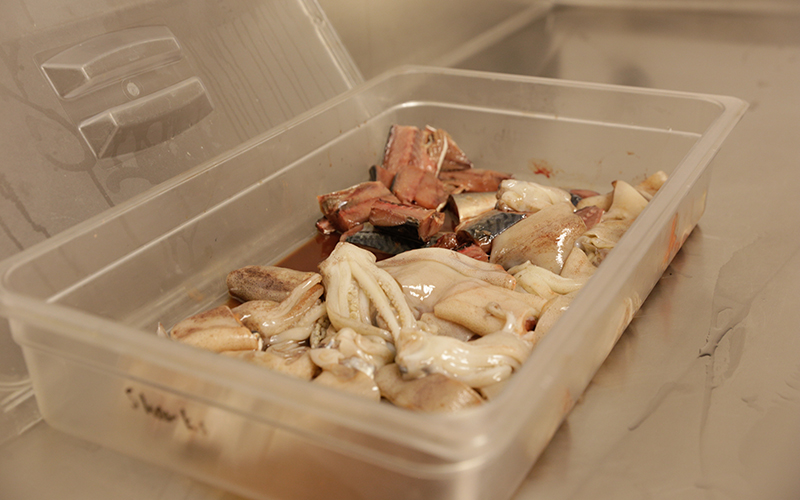 A blend of squid and mackerel is prepared for some of OdySea Aquarium’s smaller sharks, which can devour nearly 17 pounds of raw fish per week. Sharks in the wild often go weeks without eating, Peranteau said, but those at OdySea are fed about three times a week to keep them from feasting on fish that share their tank. 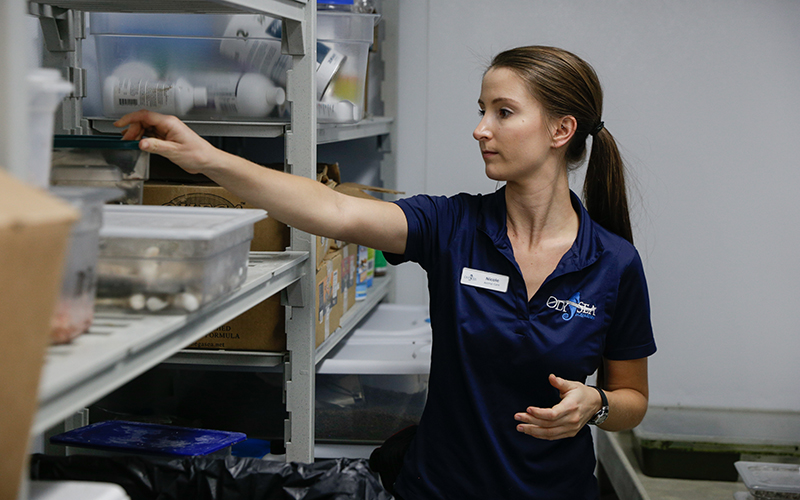 Nicole Schueller puts out fish to let it thaw – the sharks’ varied diet includes herring, salmon and shrimp. Schueller said her favorite part of working with the creatures at OdySea is getting to know their personalities. “It’s really hard not to get attached to your animals here,” she said. 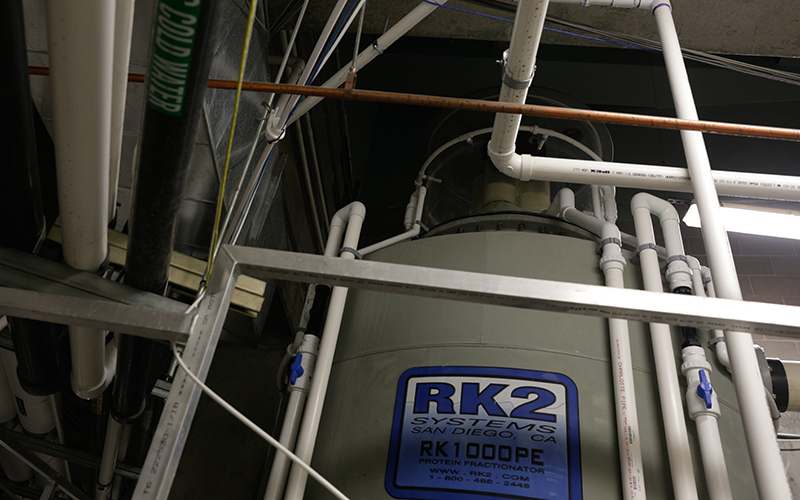 To mimic the way seafoam carries natural and artificial waste across the surface of ocean, this machine, a protein fractionator, uses foam to filter animal waste and other impurities from OdySea’s water. The water also is treated to remove chlorine and trace metals that can be harmful to sea life. Nearly 3 miles of pipes are used to circulate water through the facility. 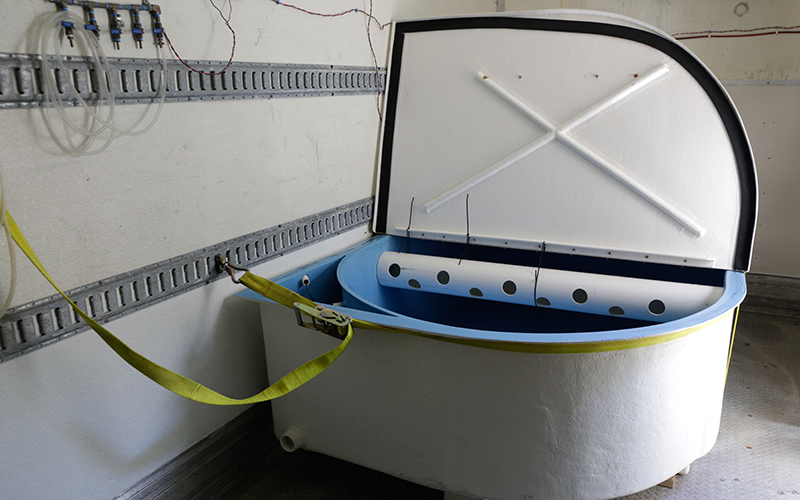 Some of the animals at OdySea were born in the aquarium, but many came from other aquariums or were purchased from vendors. When the aquarium needs to pick up an animal or deliver one, it uses a climate-controlled truck with a special tank like this one. “It’s not just like bringing a package back – these are live animals,” Peranteau said. “It’s like driving an aquarium across the country.”