One pound of fentanyl can make up to 500,000 pills, which often mimic prescription opioid pills. (Photo courtesy of the Drug Enforcement Administration)

PHOENIX – Despite significant seizures of fentanyl over the past year, the lethal synthetic opioid keeps pouring into the country across Arizona’s border with Mexico, the Drug Enforcement Administration and the Arizona Department of Public Safety say. 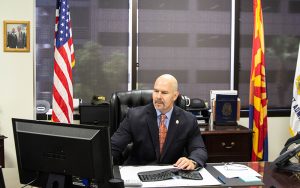 Doug Coleman, the special agent in charge of the Phoenix DEA office, says “opioid addiction is touching everybody, all races, all socioeconomic classes and every part of the country.” (Photo by Conrad Romero/Cronkite News)

“We are the tip of the spear for drug trafficking,” said Doug Coleman, the DEA’s special agent in charge of the Phoenix office, “and if you want to see what will happen to the rest of the country, watch what happens in Arizona first.”

Most illicit fentanyl comes from China, and it can be bought online pretty cheaply – $30 buys enough to overdose, the DEA says. But Mexican drug cartels increasingly are hungry for a piece of the action. They buy the synthetic components and manufacture fentanyl in powder or pill form to be smuggled into the U.S.

The profits are enormous: $3,500 can easily produce $1 million worth of the drug. But the risks to public health are just as large: 1 pound of fentanyl can kill a quarter-million people, authorities say.

In an interview in early July, Coleman said the Phoenix office of the DEA saw the rise of fentanyl and heroin before any other office in the country, and he points to the Sinaloa drug cartel, considered one of the largest and most violent criminal organizations in the world, as the culprit.

The cartel has claimed Arizona’s border with Mexico as its territory, the DEA says.

Fentanyl is popular with sellers because it’s more potent in smaller amounts, it’s easier to manufacture and provides higher profits. One pound can make about 500,000 pills, and each pill can be sold for $15 to $20, the DEA says.

“One pound of fentanyl is a super valuable commodity; an investment of $3,500 can be turned into a million dollars,” Coleman said.

Drugs coming across the Arizona-Mexico border is old hat. The vast majority of drugs that enter the U.S. come through the Southwest border and have for decades. Authorities say fentanyl smuggling is a more recent phenomenon.

As little as 2 milligrams of fentanyl can be a lethal dose. It’s so deadly that law-enforcement officials must wear protective clothing to avoid accidental exposure. (Photo courtesy of the DEA)

Despite the quantities of fentanyl confiscated, overdose deaths continue to rise across the U.S. – with nearly 1,500 suspected opioid deaths in Arizona last year, according to the Arizona Department of Health Services. Nationally, opioids claim 115 Americans each day, according to the Centers for Disease Control.

Smuggling fentanyl is not much different from smuggling other illicit drugs into Arizona.

“Fentanyl that comes across the border comes through concealed compartments in cars and trucks,” Coleman said. “Fentanyl then gets distributed from Tucson and Phoenix to places all over the country.”

Two milligrams, roughly the size of a grain of sand, is enough fentanyl to kill the average person. It can be ingested, aerosolized or absorbed through the skin.

“One pound of fentanyl has the potential to kill 227,000 people,” Coleman said.

Law-enforcement officers routinely carry the drug naloxone, used to treat overdose victims, but federal agents carry it for their own safety. Because of the dangers, they wear gloves, respirators and sometimes full hazmat suits when a bust potentially includes fentanyl.

Legitimate use and overdoses

The influx of fentanyl into the U.S. is the cause for the majority of drug overdoses, authorities say.

Fentanyl contributes to this because it can be produced in a pill form that mimics pills prescribed by doctors, such as oxycodone and hydrocodone. Users unknowingly buy fentanyl and take it at dosage levels consistent with the less-powerful drugs, thus overdosing. The DEA works with Pfizer and other pharmaceutical companies to curb this, but each time they target a specific pill, the cartels switch to another kind, Coleman said.

Compared with shooting or snorting a drug, Coleman said, pills are considered less risky by the user. Pills are prescribed by doctors, making them safer in the mind of the user.

He likened the situation to a cat and mouse game that leaves users at greater risk of overdose.

“Users buy these pills from a third party, on the street, and are told that they are strong oxy or hydro and pop three, because that’s how they are used to taking them, and that’s when it can be too much.”