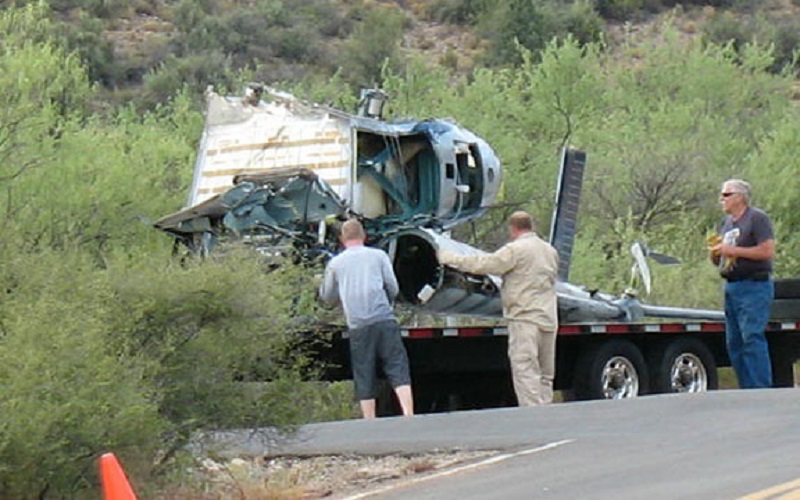 Authorities remove the wreckage of a helicopter that crashed over the Verde River in June 2012, killing all four aboard. A federal court ruled that the U.S. Geological Survey cannot be held liable in a suit filed by the victims’ family. (Photo courtesy SedonaEye.com)

WASHINGTON – A federal appeals court ruled Friday that the government cannot be held liable after a helicopter struck an unmarked U.S. Geological Survey cable and crashed, killing the pilot and three passengers.

The cable, installed 40 feet above the Verde River to help USGS workers monitor streamflow and water quality, was “virtually invisible to aircraft pilots” because it had no markers or signs to warn pilot Raymond Perry or his three passengers.

But a three-judge panel of the 9th U.S. Circuit Court of Appeals agreed with a lower court that the victims’ families could not sue the government, which enjoys immunity in the case because the decision by USGS not to mark the cable was not negligent but was carefully weighed.

“Because USGS’s decision not to mark the Verde River Cableway was discretionary and grounded in social, economic and political concerns, we affirm the district court’s dismissal for lack of subject matter jurisdiction,” said the ruling by Circuit Judge Margaret McKeown.

Calls seeking comment from attorneys for the USGS and for the families who sued were not immediately returned Friday.

Perry, an Arizona restaurateur according to news reports at the time, was piloting his helicopter shortly after noon on June 30, 2012, with three passengers when they entered the Verde River canyon about 9 miles south of Camp Verde, according to court documents.

There, they struck the cable that “was for all practical purposes, invisible to pilots … and was not marked nor did it appear on any aeronautical charts available to airmen,” according to the family’s complaint.

Supports for the cable were “either completely obscured by foliage or embedded directly into the rock face of the canyon,” which was 200 feet high, according to U.S. District Court documents.

The helicopter was destroyed and all four inside were killed. Two of Perry’s children sued for wrongful death and property damage.

Since 1980, the USGS has followed Federal Aviation Administration guidelines, which require markings for cables higher than 200 feet, or within 20,000 feet of an airport or 5,000 of a heliport. None of those apply to the Verde River cable.

The agency amended that policy in 1984, telling USGS managers that consideration should be given to marking cables “if they are hazardous to low-flying objects.” Perry’s estate argued that the government should be held liable for negligence based on that low-flying hazard standard.

The USGS considered marking all cables after a 1995 collision between a plane and an unmarked cable, bringing in an FAA air specialist to evaluate the policy. But he advised that marking cables lower than 200 feet “could have potentially harmful effects to pilots who expect to see obstruction markers only at higher levels.”

The USGS also presented myriad other reasons why they decided against marking the Verde River cable, including the costs of installing markers and risks to workers, the likelihood of vandalism and the U.S. Forest Service’s desire “to minimize visual distractions” over what had been declared a Wild and Scenic River.

These factors were enough for U.S. District Judge John Tuchi to dismiss the lawsuit in January 2017, saying the government is immune from being sued for “discretionary” acts of its agencies or employees.

The 9th Circuit agreed, but McKeown cautioned the government seeing the ruling as a free pass.

“Our invocation of the discretionary function doctrine in cases of public safety should not be read as giving the government a pass every time it raises the exemption,” she said.