LAS VEGAS – The scene at Cox Pavilion Friday mimicked the boarding of an airplane: slow, confusing and frustrating. The coach watched the cross traffic flow behind the scorer’s table, looking ahead to see what the hold up was. As people started to scoot by him and head to better seats, the whispers to their friends began.

“That’s Bobby Hurley,” some said in hushed voices, like they were protecting a state secret.

Kentucky coach John Calipari, who attended the same game, came in through the back and sat courtside. Hurley, along with ASU Special Assistant to the Head Coach Ben Wood, sat in the stands with every other fan.

Why? Because while watching the Houston Rockets and Indiana Pacers compete in the first Las Vegas Summer League game of the year Friday, the Sun Devils head coach was a fan — a supporter.

He coached Shannon Evans II at Buffalo for two seasons. When Hurley left for Tempe, Evans joined him. Hurley calls him extended family and with Evans embarking on his first professional basketball opportunity with the Rockets, Hurley only felt it was right to be there.

“(He) did so much for Arizona State, for me personally, so I just wanted to be here to support him,” Hurley told Cronkite News. “It’s the beginning of a new journey for him, it’s like starting over again.” 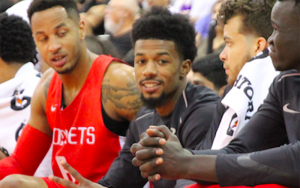 Hurley’s one-day Sin City trip would have allowed for him to see a pair of his former players, but after being signed by the Philadelphia 76ers, former ASU guard Tra Holder was waived before summer league began.

Evans said he talks to Holder and another founding father of “Guard U,” Kodi Justice, every day, adding that he’ll be in Los Angeles the rest of the summer and will be with Holder “a whole bunch.”

Evans may not make the NBA — he didn’t get in the game Friday — but right now he’s afforded the luxury of NBA coaching. Hurley’s teachings were phenomenal, Evans said, but for the limited spacing of the college game. He’s embraced the time he’s had so far with Houston’s coaches and said he’s “learning a lot.”

“Going in the film sessions with the coaches, pick and roll,” the 6-foot-1 guard said. “The way that you got to be — attack with your guys in the corners. The college principles are out the door. The NBA game is a whole different game.”

But Hurley knows that. After an illustrious career at Duke, Hurley was drafted No. 7 overall by the Sacramento Kings 25 years ago. Although in far different circumstances, the NCAA all-time assist leader passes along words of advice to his former players.

“Just to continue to focus on getting better and competing the way they competed for me at Arizona State,” Hurley said. “And Tra and Shannon and Kodi will be fine, just hoping for all of them to get good situations, good starting points for the next phase.”

The trio is still going through the post-collegiate process, weighing different opportunities such as the G League or searching for international teams that seek their talents. Evans said he’s talking to “a whole bunch” of international teams at the moment, any of which would be lucky to have him, or Holder of Justice, Hurley said.

“I just think they’re all dynamic and they’re all creators,” he said. “Teams are going to love what they bring to the table and wherever they end up, they just have to keep leading their teams to victory like they did for us last year.”

Last year, the Devils reached new heights under Hurley. They raced out to a 12-0 record, were No. 3 in the country in December and ultimately made the NCAA Tournament. In the construction of the program Hurley and ASU strive for, the trio was arguably its greatest building blocks.

Just over two weeks ago, Justice, Evans and a plethora of other current and former players under Hurley reunited in Tempe for the Bobby Hurley Basketball Camp. It featured those who helped the program grow exponentially and those who will benefit from it.

“It was fun,” Evans said of the camp. “A lot of jumping around. A lot of playing and things like that. It was great to be around those guys, the older guys and the younger guys. It was a good time.

“He wants everybody back to be around the program. Alumni and players that are still in the program. It’s great.”

That bond between classes is something Hurley hopes never leaves his program. It builds tradition. It also preserves relationships.

Hurley’s players will come and visit him in Tempe, hoping the program reaches greater heights than they saw. On Friday, Hurley showed that he will do the same thing, hoping for the same result.

“It’s fun to get a chance to see them in the uniform,” Hurley said. “And I’m disappointed, too, because at the same time I wish he was still there.”