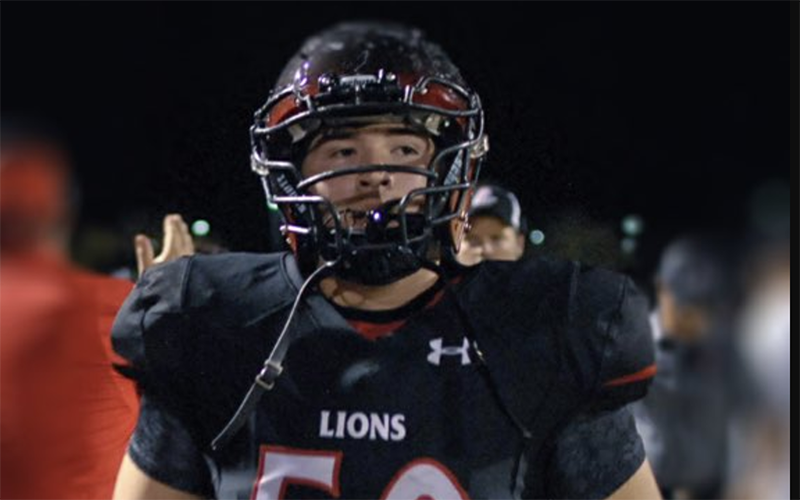 Even thought Liberty High School football standout Zach Hunzinger was diagnosed recently with osteosarcoma, a type of bone cancer, he is determined to continue playing football and hopes to inspire others. (Photo courtesy Christine Andert with Picture Lady Photography)

PEORIA — Every year, football players around the country succumb to injuries that put their seasons in peril. For Zach Hunzinger, a pain revealed a far more serious issue.

The Liberty High School football standout was diagnosed with osteosarcoma, a bone cancer, in his knee and started chemotherapy soon after. The diagnosis came after Hunzinger complained of knee pain to team doctors during spring football.

Hunzinger has reacted well to the chemotherapy. He has two more rounds to undergo before surgery in August.

Hunzinger was the starting center and the only returning starter on an offensive line that advanced to the state semifinals last season and a leader on the team even when he is not playing.

“I told Coach Smith, and all the coaches, that I’m going to make it to every single game, I’m going to make it to every practice,” Hunzinger said. “You guys are my second family, you’re always going to be on my mind. I was thinking a tradition I could do is just wear my cleats on the football field and just kind of make it feel like I’m playing. Everybody is just around me knowing that I am going to be there for them and do everything I can to make sure the team knows how much I care.”

Hunzinger recently tweeted, “Ever since I got diagnosed with osteosarcoma I’ve been telling my self…. “this is just a minor set back for one hell of a COMEBACK.”

To help get Hunzinger back on the field, fundraisers have been an important part of the process. The Phoenix Rising youth soccer program hosted a car wash at the Arizona Sports Complex in Peoria. Hunzinger’s sister is a member of the team and her coach suggested the idea. Most recently, the Haymaker Restaurant Company contributed a portion of their profits on a day in mid-June to Hunzinger’s cancer treatments. Also, the family is accepting donations at https://zach50.americanyouth.com. 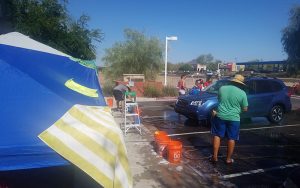 “I am so grateful that he has a lot of friends and family that care and support him and it has been overwhelming,” said Zach’s mom, Megan Hunzinger. “He’s been texted and tweeted by coaches all over the Valley and college coaches, across the United States, have wished him well.”

Zach was just starting to get looks by college programs before the diagnosis. He was a returning leader on the offensive line and he was second team all-conference for division 5A. His good friend on the team, Ryan Puskas, has already committed to the University of California, Berkeley.

“My goal was to always play college football and when I found out about this, my first major thought was, ‘Oh my gosh. What about college? If I’m not playing this year, what’s going to be the next step?’ ” Zach said. “Coach Smith has been sending me stories about people that got diagnosed with cancer and they didn’t get to play their senior year but they still went to go play at a big-time school. My goal right now is to play college football anywhere. If any team picks me up I’m going to go play for them. It really hasn’t changed a lot.”

His story shares similarities with the one told in the movie “My All-American” about former Texas safety Freddie Steinmark, who faced similar obstacles.

“I see myself in that character,” Zach said. “He had the same diagnosis that I have right now and he ended up losing his leg towards the end of the movie, but it shows how he had to stay positive. He was the one that helped get this type of cancer noticed and raised a lot of money.”

Staying upbeat in these situations isn’t always the easiest task, but it remains Zach’s top priority with the free time he has now. The doctors told him a big part of the recovery process is to always stay positive, and Zach displays that when he sits on his couch and runs constructive thoughts through his head.

“My goal over this whole entire thing is to motivate others,” Zach said. “This is horrible what I have and if others have this cancer, to tell them, ‘Everything is going to be OK, (you’ve) always got to stay positive and just do everything you can.’ ”